Writing What Scares You: On Blue Shoes and Birthday Cakes 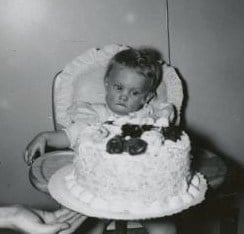 Writing what scares you

I sometimes wonder. Whatever possessed me to want to write? From where I am now in life, the answer is apparent—when I started, it was with a blend of aptitude and naiveté. Writing is work, hard work, mentally and physically, and if you look to publish, it can take years to make little progress. I’ve thought, at times, I’ll just stop—just stop writing. I never have, though, because what I feel at my desk—that high of creative flow—outweighs the rest. But writing comes with other costs, too. It’s dangerous. You find yourself writing what scares you.

The subjects that I write about scare me—there’s always something uncomfortable about them. But what I write scares me, too. I’ll find myself thinking, “Did I just write that—do I dare write that?” I have a natural inclination towards caution that writing pushes hard against.

Take a look at the picture at the top of this post. It was taken on my first birthday. Talk about uncomfortable! I love the look on my face, so fatigued, so wigged out at being confronted with—with—what is that?And why are you giving it to me? The photo makes me laugh, because I still get that feeling. The world is still filled with dangerous things like birthday cakes . . . and blue shoes.

More on the shoes later.

I’ve been puzzling over the scary aspect of writing since I did an author talk last month at an unusually beautiful small-town library. It’s in the writer Sinclair Lewis’s hometown of Sauk Centre—they take books seriously there!

The main room of the library has a high ceiling—your eye rises up to an airy, windowed space—and the walls are white plaster decorated at the corners with three-dimensional scrollwork, a raised lattice reminiscent of trailing vine. If you ran your fingers down the wall, you’d feel it. I wish I had a picture to show you, but when I speak to an audience, I get so engrossed in getting where I need to be—I get so focused on making the audience’s being there worthwhile for them—that it’s only when I’m waving the last goodbye that I remember I should have preserved the moments with photographs.

I left the Sauk Centre library euphoric. The audience had been all women, and they were into literature at a deep, searching level. The time we spent together was proof that literature connects minds. Aside from teaching, which in my case linked directly to my writing life, I wouldn’t choose any other path than writing. Nevertheless, I leave my author events drained—speaking is hard work, too. I left the library feeling that I had gone to the bone, in talking about my craft as a writer, especially with my novel, A Notion of Pelicans.

Audience questions had centered mostly on where the book had come from and how it evolved. I understand the interest. I love to know how books were written and where they came from. When I’m reading a novel, I read for character, more than plot, and of course I write that way, too. Shortly after finishing graduate school, I had a watershed moment. It was a time of “firsts”—first teaching job, first visit to a female doctor. As we visited and I complained that I was feeling worrisomely neurotic, she laughed and said, “We’re all neurotic, in our own way.”

It was a comfort to hear her say it—with those seven words, the doctor gave me a sense of community, and freedom to be me. I wish she could know, these many years later, how important those words were and how they opened a door. Not long after, I began writing fiction, exploring human quirks from different angles. My characters are loving, well intentioned, and kind. They also gossip, they lie, and they’re unfaithful in ways large and small. I could fill this post with their self-absorption, obsessions, misapprehensions, and misunderstandings.

When readers ask where my characters came from, as some did in Sauk Centre, I’ll tell them that they are all me, in some way. Then I’ll say they’re not me, not at all—characters take on their own life. The contradiction is hard to explain without sounding delusional. As I left the Sauk Centre library, I felt like I had felt occasionally in dreams—I’ve ascended to a high place, it’s exhilarating, but the way back down isn’t clear. In fact, there may not be a way down.

I guess I’m still naïve, spending so much time moving words around on a page, my shoulders in a knot from focusing so hard, for so long. I write the things that scare me because, to me, a safe subject isn’t worth the effort that writing requires—or worth the effort that reading a book requires. In exploring what I’ve felt in life, either personally or empathetically, I’ve created something new—a novel, a play, a poem. I’ve also imposed a comforting order on whatever feelings or fears were at the root. If readers have also felt those things, they may find comfort, too.

Almost twenty years ago, my mother had surgery for a life-threatening illness. It was awful—there was nothing I could do, beyond being there. But there were helpers—more doctors, and nurses—and I felt strong emotions around them. I’m intrigued by our human tendency to develop feelings for those who help us. The exploration of that sort of attachment is also part of my novel. The pastor of Pelican Church, Richard Cross, carries the burden of being the object of complicated affection from many directions.

The poem that follows grew out of that frightening situation with my mother’s health. The heart of it is my desire for deliverance from life’s problems, the desire to run away. You may feel concern for my husband as you read the poem. Fear not. Bruce is a secure man, as well as a poet—he gets that you write what scares you:

The Man in Blue Shoes

scares me
what he reveals about me,
actually

because
like a damn fool,
I’ll write it
down

falls into—something
with her mother’s
surgeon

shrinks
have a name for it—
though in this case, it’s once
removed

when he blew in
to say
what he’d found, he was wearing
scrubs

blue paper booties over
his shoes

he took
my hand and took it
again

held it in some
dream
of his own