Invite Donna to be part of your next Book Club meeting. If you live within driving distance, she may be able to join you in person, or perhaps she could join you online via Skype. Send her a message using the Contact link of her website. 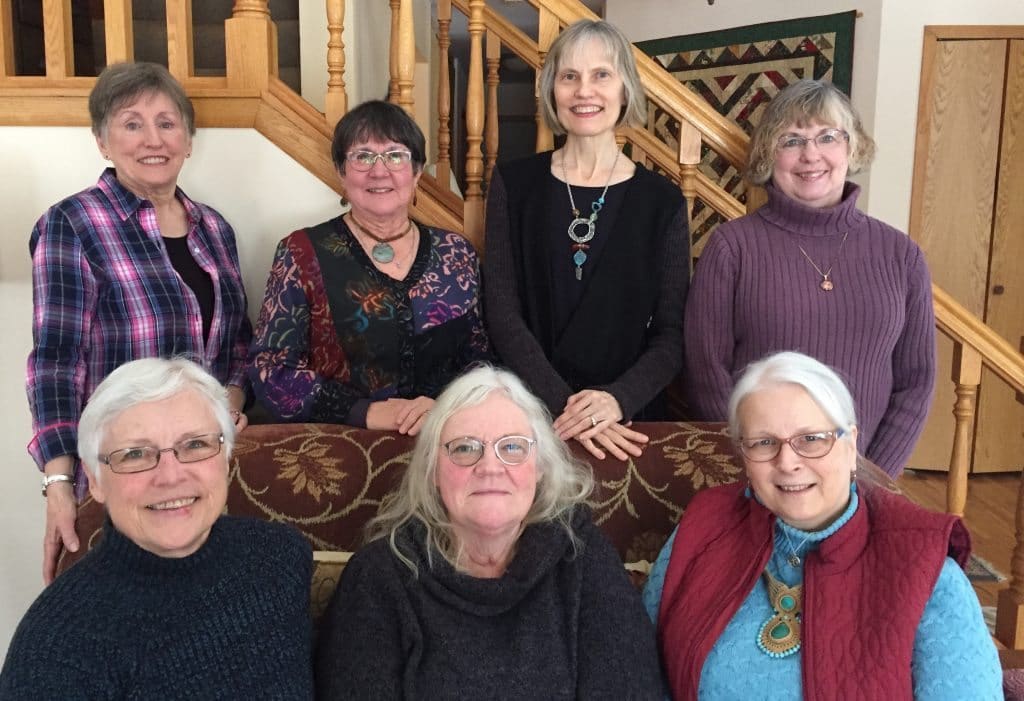 Donna’s first meeting with a Book Club! Intrepid members of The Novel Women book club braved snow and cold temperatures to host Donna for a discussion of her novel, A Notion of Pelicans.

Questions for Reflection: A Notion of Pelicans

How do you interpret the novel’s title, A Notion of Pelicans? What sorts of “notions” do you see in the book?

What role does Lavinia Hansen play in the book? How do you interpret Lavinia’s pelicans? Are they just pelicans, or something else?

What do you make of the single white pelican that circles overhead in the short chapters between the narrators’ chapters? What do those chapters add to the book?

How is the book, being set around a church, different than it would be if it were set around some other place?

Things in life are often not what they seem. Reflect on the ways in which that’s true in the lives of the book’s characters.

What ties the four contemporary women—Rena, Lucy, Toni and Claire—together, despite their differences? Go deeper than their attendance at the same church.

Consider the men in the book.  Their stories are told by women.  How does that affect the way we see them? What do we know about them, and how do we know it?

Each of the characters experiences loss. How do those losses shape them?

Which of the characters in A Notion of Pelicans do you most identify with? Why?

What role does spirituality play in the lives of the characters?

In the first chapter, when the pelicans are flying above her, Lavinia says she is “lifted up into a living web” (p. 4). A Notion of Pelicans explores an expanded idea of family. Reflect on the interwoven layers of relatedness in the book. How do the various layers affect one another?

At the end of the first chapter, five adjectives describe Lavinia’s pelicans:  free, intense, obliging, wild, and joyful. Reflect on the ways in which those traits are repeated as themes in the book, arcing to the lives of the major female characters (Lavinia, Rena, Lucy, Claire, and Toni).

The novel explores difficult personal and social issues, including relationship problems, divorce, sexuality, and violence between intimate partners.  What redemption do you see coming out of those hard situations in the book?

The novel is set in the 1990s—before the Internet became ubiquitous, before social media. What relevance does it have for people today?