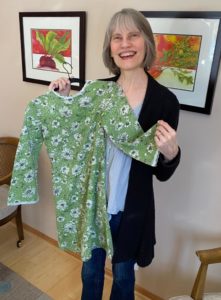 The dress I’m holding in the photo is one I wore in my mid-teens. It’s homemade. I love its bell sleeves, that simple silhouette. Later, during my college years, my parents bought our family farm. The house had few closets, so Mom took garment bags full of outgrown clothing to my Salli grandparents’ house. The bags hung in a closet there for decades until an aunt found them and returned the things that had survived an invasion by moths. My mother then gave each of us adult kids the clothing that had been ours, the little green dress among them. Since rediscovering that dress, I’ve felt strangely anxious about it. I knew the dress had something to say, if it would just declare itself. A few days ago, I realized—anxiety is the point. The dress reminds me of my lifelong anxiety over fashion. It speaks to me of my fraught relationship with politics.

When it comes to clothing, I like a relaxed, funky look. My philosophy is this: if people don’t like it, they’re free to look the other way. I still love a bell sleeve. It takes me back to the 1970s, to my “Flower Child” coming of age. Yes, there are times when more formal dress is called for—but most days, I’m a laidback, blue jeans kind of woman.

I’m not alone in my fashion anxiety. Other women have their own funny stories to tell. One accomplished woman I know stepped up to a centrally located copy machine in her busy administrative office, only to have the waistband of her half-slip fail, dropping the slip into a crumpled heap around her ankles. Another strolled down a windy Cambridge, Massachusetts, street with her wrap-skirt bunched up in back into the waistband of her pantyhose. I’ve thus far been spared such all-out wardrobe disasters. With me, it’s small missteps that haunt me.

I had my first fashion anxiety attack when I was in the first grade.

I’m my mother’s oldest child, and she took pains to send a cute little girl to school. Every night, she set my hair in pink rubber curlers. Every day, a cloud of blond—artfully shaped with barrettes—framed my face. I had nifty saddle shoes, two pairs of patent leathers (white and black) and the sweetest little skirts and dresses.

One day, my mom dressed me in a white blouse and pleated plaid skirt with shoulder straps. Somehow, in her hurry to get me to the bus that morning, she forgot something. I arrived at school and, with a stop in the bathroom, discovered I wasn’t wearing a slip. I usually wore a full slip, and Mom had forgotten it! I was horrified. I felt wrong—naked, somehow. The rest of the day, I could feel my heart, sunken and slinking in my chest. It was crouched like an animal fearing attack, until at the end of the day, my leap from the bus back onto our long gravel driveway brought cool release.

That cute little girl eventually became an ugly duckling. I’m not exaggerating. By junior high, I was painfully skinny, I wore glasses, and I wondered if I would ever fit into the social sphere. Oh, but I tried! I had my hair cut into a severely short Twiggy cut, which made me look even more like a rail. I bought a black “newsboy cap” and wore it to Fun Night at my school. It made me feel cool, like The Mod Squad. Oh man. More like The Dork Squad.

By the time I was wearing that little green dress, I was still a string bean. But that didn’t stop me from buying a pair of ugly, clunky-heeled shoes that looked like gunboats on my skinny legs. I was desperately naïve, and I let the salesgirl talk me—despite what I could see with my own eyes—into thinking they looked good. There was a life lesson in it. I don’t allow anyone to talk me into something that’s good for them, not for me.

Even now, mature and enjoying retirement, I spend more damn time staring into my closet, sighing, cursing. Again, I know I’m not alone. My anxiety over my wardrobe is a symptom of my anxiety over my role and place as a woman—and that anxiety is at the heart of my novel, A Notion of Pelicans. My main characters are church ladies. I set the novel around a church, in the faith tradition I know most fully, because I’m sympathetic to organized religion and see it as worthy of respectful, truthful examination. Organized faith communities are human institutions, with the concomitant warts.

My church ladies’ being church ladies doesn’t spare them from the same pressures and insecurities that real people feel. They wrestle with their demons. They neglect to wash their hair. They swear—they act out—their waistbands fail. That is what makes them interesting to me. Who are they? How do they fit into the world? How does the world treat them?

I just slid over into my fraught relationship with politics.

You’ve perhaps been wondering how a little green dress could speak to me of that? Here’s the thing. I don’t live in a vacuum. Every day, my computer hurls insult after insult at me, especially via social media. The fact is I’m a small town girl. I value my family and friends. I care about tradition, am loyal to my home community, and prefer simplicity. But I’m also an academic. I lean, out of conscience and life experience, politically to the left—well, to be accurate, a good-bit-left of center. I use the word liberal to describe myself. Every day, meme after meme assaults me—making claims about me. I want open borders. I’m pro-killing-babies. I’m a snowflake. I demand safe spaces. I’m a socialist.

I could go on. I am none of those things.

I look at that little green dress, and I sigh over how polarized we are. It makes me sad. I am still the small town girl who wore that dress. My town is simply bigger now. It encompasses the planet. There are those among us who have embraced “me first.” But most of us have not. Here’s my plea to those who post insulting memes. Please, reconsider. People are as good, as bad, as lovable, and as hard-to-love as you are. As I am. We simply see different paths to achieving wellbeing, to solving problems. That says to me we need to find ways to compromise, not dig in deeper. Don’t let politicians and bots and trolls and God-knows–what manipulate us. Don’t let them sell us ugly shoes.

There’s every reason to feel political anxiety. We have so many problems to solve. But we’ve become fractured, and we feel powerless. When I get to feeling that way, I write. I try to make a difference with words. I’ve recently finished a dramatic script, Peep Show. It’s dystopian—a story about politics in this country having taken some frightening turns. I chose that title, that metaphor, to rattle ideological cages. Not just the Left, not just the Right, but across the spectrum.

The play wants us to keep tabs on what the politicians we’ve elected are up to. It invites us to think about—no, to experience—our shared humanity and to work, when and how we can, for the common good. It’s difficult to get a play produced. So it may be that no one will ever see Peep Show on a stage. But that’s neither here nor there. I will never regret writing it. Working long and hard on that script, knowing it didn’t defeat me, has kept me from sliding into hopelessness. It’s more than a script. It’s my voice, my spirit declaring itself.

Among all the hateful “liberals” and “conservatives” that we like to label and pin the world’s troubles on, there’s a woman who sat next to us in high school chemistry. Maybe she was wearing a little blue dress. There’s a dad who coaches softball, a pre-med student who serves us coffee every morning on our way to work, the ceaselessly friendly guy at the info desk at the senior citizens center.