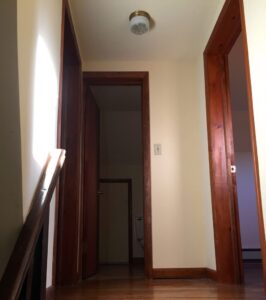 I took this picture of the putka in the early morning, two days before the sale of the house. The doorway on the right is to a bedroom. Back when my grandparents lived in the house, there were two beds in that room—a double-sized brass bed and a single bed that my mother slept in during her teen years. Whenever I stayed overnight with my grandparents, I slept in that little bed. When I was still a child, I used to lie awake listening for the ghost, lest it leave the putka.

You might be wondering about the ghostly encounters that set me on the path to listening for ghosts. The members of my family who had them weren’t afraid to speak about them, though not quite sure what to make of them—and a child like me was willing to listen. When my mother’s father passed, my grandmother and my mother, both wide awake, saw and heard him, on separate occasions, and others reported that they’d been aware suddenly that he was with them, though unseen, miles away from the farm. Eventually, no one saw or felt my grandfather anymore—he seemed to have passed on.

Ghosts inhabit my writing, as they’ve inhabited my life. Both my parents lost siblings who died young, around the age of forty—an uncle on my mom’s side, an aunt on my dad’s. The loss of that uncle first inspired me to think that the putka was haunted. When he died, clear across the country, there was sorrow and distress in my grandparents’ house like I had never seen. Their heavy black phone rang again and again, delivering a stream of funeral details and condolences. Those days and weeks shook me and have stayed with me.

Throughout my childhood, I had a recurring dream: I would have to go into the putka, and the ghost would be in there—not my uncle, but something unknown and threatening. I wasn’t sure I should go into the putka, but I was drawn there as I opened the door, crouched, and crawled in. Then I would always emerge safely, somehow, though scared out of my senses. I have had that dream even as an adult, usually when I have felt somehow imperiled. So far, I have survived whatever was scaring me.

The loss of my aunt also contributed to my listening for ghosts. My father’s mother, Olga, who passed away when I was twelve, experienced something inexplicable after her daughter died. But let my poem about that experience explain it.

They Still Love Us When They’re Gone

Wake is what I thought,
and what it was—that smell
of flowers, my father’s sister suspended
in a cloud of satin, laid out in a blue dress
the shade of the grapes that grew
in my grandmother’s arbor.

At her breast was pinned
a brooch, half-remembered silverwork—
around a stone, perhaps.
Her hands were still,
pale, loose across her breastbone;
schoolteacher spectacles
perched unnecessary
on her face.

It was days after
Mother’s Day—I was six.
I stood beside the casket
at profile height, my hand in somebody’s,
and willed her to sit up. Off to one side—
my cousin’s round red face,
our grandmother inconsolable.
I willed Auntie to get up—
but the next day they put her
in the ground.

One day, the following fall
during woodcutting season—
the grape leaves gone to crimson,
my grandmother home by herself, horizontal
with grief—footsteps
crossed the upstairs floor. They stopped
at the top of the stairs,
and the beloved voice, Auntie’s
voice, called down,
dusty, in Finnish, “Mother, stop
crying now.” Äiti,
älä itke.

My family was living with my father’s parents that year. Such a long time ago now, but my memory is that while Grandma Olga was hearing that voice, the rest of us had gone into the woods to cut firewood. Grandma stayed at the house alone. I expect she wanted quiet. I imagine she needed space to grieve. While we were gone, she heard footsteps—she heard her deceased daughter’s voice. Was she imagining it? Were the footsteps a sort of comfort? Did she will herself to hear that voice, speaking from the top of the stairs?

That confusing night at my aunt’s wake, I had tried to will my aunt to sit up, in my six-year-old understanding. But my grandmother had crossed the Atlantic on her own, emigrating from Finland, and she had powers of discernment and resilience I had yet to learn. As I grew older and learned what Grandma Olga had experienced that day, I came to see our familiar ghosts as loving, more than frightening. I wasn’t skeptical. I had no reason to distrust her experience.

It’s confounding sometimes, how strange and unrelated things will insist on being linked in what I write. I’m constantly surprised by what emerges—the unexpected turns and synchronicities. Thinking about ghosts and the putka, these recent days, while at the same time thinking about those camouflaged figures and unmarked vehicles in the streets, I went to my Finnish-English dictionary and looked up “putka.” I had quizzed my mother first as to its meaning, and her understanding as an American Finn was that it’s a windowless closet used for storage—but my Finnish dictionary told me it means “jail,” or “lockup.”

Seeing those words on the page, my head tilted, and my jaw dropped. Isn’t it funny, how the mind sees irony? What’s frightening me now is what’s happening in the streets of Portland, where people who are protesting peacefully—as is our right—are being hauled off to “lockup” by those figures in camouflage. They’re being carted away in those ominous vehicles—according to news sources, with little idea as to why.

Is this truly where we are? This week, a former Nazi concentration camp guard has been convicted of being an accessory to murder. The ghosts of the people who were locked up in those camps, who died in them, are still with us, speaking through the memories we preserve. They are our ghosts. We should be listening to them and acting to preserve what we’ve managed to make better in the world, not lobbing tear gas at a Wall of Moms.

Where will it stop? Chicago? Albuquerque? My little Minnesota town?

I know that many of us don’t believe in ghosts, but there is plenty to fear in this world. It doesn’t take wild imagination to see that what’s happening in Portland could be setting a horrific precedent. Today it’s the political Left being affected. Maybe some think that’s okay. But another day, it might be the Right under the gun—any of us, really, who say or write what has suddenly been defined as the “wrong thing,” who visit the wrong websites, gather on the wrong street, even breathe wrong. And that is not okay with me. Lately, our national life seems like a putka dream. Do we run, stifling our screams, away from the putka that holds these frightening new things? Should we stop speaking and writing, stop taking to the streets, just close our eyes and hold our breath?

Not me. I open the putka door, crouch, and crawl in—I lock eyes with what frightens me.