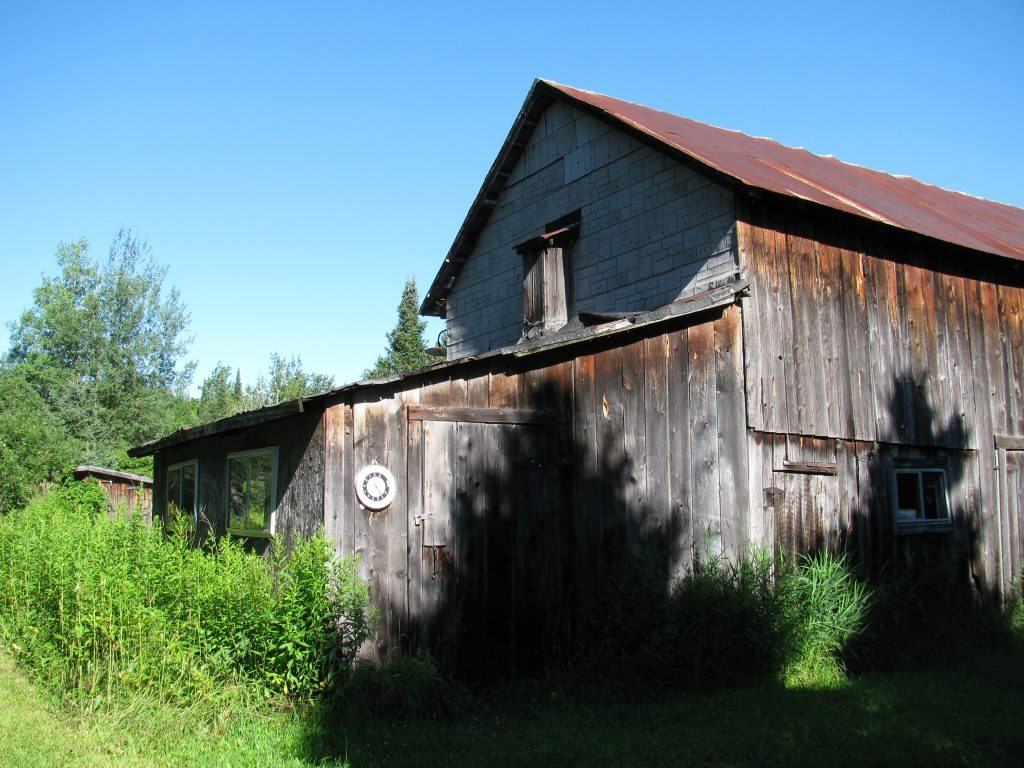 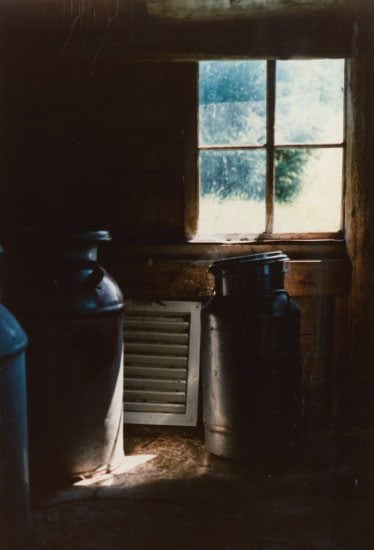 A Portal In Time

My mom and dad took over the family farm from my grandmother in the mid-1970s. The place was in our blood. The photograph at the top of this post is of the barn in its late life. The other photo is one I took from inside the barn, looking out. Seeing those old milk cans, I can hear them clang. I see my grandparents, long gone now—my grandmother with a milk pail, stooped beneath a cow, my grandfather mucking out a stall. I smell the heat of the cows. Looking through that little window in the image, my nostrils flare. The day I took the picture, nearly forty years after any cow or horse walked those dirt and rough-plank floors, the place still wafted an animal smell.

The barn was a portal—to step into it was to go back in time—and that barn, that farm, shows up repeatedly in my writing, literally in my essays and poems and fictionally in one of my plays. My family went through a difficult time a couple years ago, when my widowed mother reached the point where she could no longer keep up that beloved farm. We were faced with the question:  what are we going to do?

The barn was a particular problem as we figured out Mom’s situation, because it was falling down. There were agonies involved in our deliberations, and tears. I got through it as I always do—I wrote. The day came when we faced that we’d have to tear the barn down. My essay about making those hard decisions, “Razing the Barn,” appeared in Her Voice Magazine. If you’re interested and would like to discover a nice little magazine for women, here’s the link:  https://issuu.com/brainerd_dispatch/docs/hervoicespring2016

Going through a huge box of old letters and cards recently, I found a birthday card from my sister Doreen, who, like all my siblings, headed home to the farm as often as she could. The card she’d sent had on its front a cartoon illustration of two farmwomen with wild, flyaway hair. The two are gleeful to be “mucking about” (as the British say) in a pigpen, apparently wasting time, being silly. The women are jumping, dancing, kicking up their heels. Their expressions suggest they are delighted to be ankle-deep in mud and excrement, and that they’re up to some sort of “no good.” Doreen had annotated the image, scribbling that one of the wild-hairs was her—the other, me.

As I went through the box of correspondence, there were hard decisions to make—keep, or toss? With that birthday card, there was no decision to be made. It’s now safely stored with other things that made the cut, in a smaller box. Some things, no matter how trivial, you keep. For me, those things have always related to family.

There’s a reason my sister, who is also a poet, sent that particular card. The lives we live, the academic careers we chose, took us a great distance from home, geographically and situationally. The card, too, is a portal, a reminder of the way of life we left. The distance between that life and the one we chose as adults creates a tension that we draw on in our creative work.

A casual observer looking at the birthday card would see a funny card between sisters. I see what I believe Doreen saw as she chose those wild-haired women to be the bearers of my birthday greeting:  a nod to the time we spent exploring the family farm and the woods and fields around it. Even though we were wasting time, none of that time was a waste. Those hours shaped us—they were formative, even holy.

The card was a nod, as well, to our shared, marrow-deep joy that, though we left the farm for the academic and literary worlds, we are at heart small town girls, descended from farmers and gleeful at the thought of escaping back to the pigpen. Despite our stick-straight, un-rowdy hair, Doreen and I are in a sense those wild-haired women. Something else we share is an understanding that a writer’s calling is to muck about the world, exploring it with words—loving that world, and the process of exploring it—letting her hair fly free and kicking a little dung.