Where the Sidewalks Ended 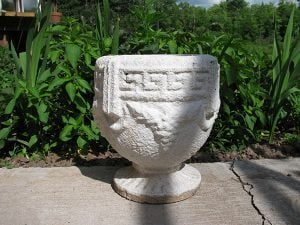 My mother and I were standing in the echoing salesroom of the feed store, one of those dusty, mom-and-pop sorts of places you’ll still find in the towns along Lake Superior. Mom was studying a stone urn we were holding between us, our arms wrapped around it in a tricky but not uncomfortable embrace. She raised her eyes. “Think we can do it?” she said.

The urn was heavy. We guessed ten, maybe fifteen pounds. It was a concrete goblet—white-gray, with no handles and a pedestal leg. We were in front of a display of identical urns in three sizes. The largest was more than we wanted to take on. The small one was too small. The middle one, which we were holding, was perfect.

I was sixteen. Mom was thirty-eight. We were bent on buying the urn, which would hold flowers at her father’s, my grandfather’s grave. But first we’d have to get it home. The feed store was downtown, two miles from our house, and we’d be walking. Looking back, buying the urn that day was one of the dumber things my mother and I have done together.

Like a lot of towns along the lake, ours had been birthed by mining and was made up of smaller communities known as locations, each named for the mine it had grown up around. The mines were gone, but not the names. We lived in Newport Location, also known as Jessieville. We thought nothing of walking to town—we’d take a back road that skirted Norrie and Aurora Locations. Much of the land along the road was caved in, from a collapse of mine drifts brought too close to the surface. At the high school, where I was finishing my sophomore year, there were cracks in the walls from that long-ago cave-in. The walk along the road was wild, serpentine, and hilly.

We hadn’t set out to buy an urn. After Dad took the car to work—he was on afternoons that week—Mom and I decided to go to town. It’s so beautiful out, we agreed. We would often go, just the two of us, and I loved those occasions. To get downtown before the stores closed, we called a taxi. To save money, which we didn’t have a lot of, we’d walk back.

As we shopped, we talked about my grandfather, whom the family called Paappa. He’d died the summer before, and I had never seen anyone grieve as hard as my mother. She cried for weeks. When she moved past that, she went through her days as if through deep water. As the months passed, she became more herself, but it was still hard. Memorial Day was coming up, the first since Paappa had passed, and we talked about that, too. Attending to graves was important. We’d been schooled by my grandmother, who would periodically visit every area cemetery, and who, each Memorial Day, placed flowers at the graves of every long-gone and even distant relative.

The family had decided to buy an urn for Paappa’s grave, and Mom had taken on the job of purchasing it. She knew she could find one at the feed store. We followed our usual routine—the clothing stores, the dime store, the fabric shop, and last of all, the bakery for coffee and cream puffs. There, we made a decision: we would stop at the feed store, just to look. Well, looking became buying, and soon we had set off walking. Now, I have never been a heavyweight. I have arms like the purported arms of aliens. Two miles. We clearly weren’t thinking.

It went well, at first. We set out, a slender woman and a skinny teen, with a stone pot pitching and rocking between them. The sun was warm—the air, fragrant with spring flowers. Soon we reached the viaduct near the high school. That long, high bridge—a concrete mountain—moved traffic over the railroad tracks. The bridge had a pedestrian walkway accessible by a steep stone staircase. When Mom and I mounted the bottom step, we were carrying an urn weighing fifteen pounds. At the top, after many stops, we were carrying an urn that weighed at least thirty.

We began the walk across. We must have been a sight for drivers on the bridge. We were so close to the high school, I began to fret. I wasn’t one of the glamorous kids, was fine with it, but didn’t want to seem ridiculous, wrestling a big stone flowerpot. What if a favorite teacher drove by? Or some girl I admired? Or—please God, no—some guy I had a crush on? Soon I was peering into cars, as my arms kept getting longer.

We made it over the viaduct, past the school, and through the residential area around it to where the sidewalks ended. That’s where we picked up the back road. Somewhere along the way, Mom and I began to trade off carrying the urn. Our arms were so tired. Mom would be carrying it, and she’d suddenly say, “Take it,” followed by something along the lines of “My arms are breaking.” She’d hand off, and her elbows would stay stuck at the angle they’d been locked in.

Along the way, we also began to laugh, a kind of delirium. We were exhausted, and we still had Jessieville Hill ahead, a long, steep incline that even our car didn’t like. As we walked, the urn kept getting heavier. By about the mile mark, whoever was carrying it would manage a couple hundred steps and have to trade off. Occasionally, we’d go back to both of us carrying it, or we’d stop and rest. I wasn’t as strong as my mother. The farther I carried the urn, the more bent over I became. I even dropped it. The urn slid out of my arms—slipped, in slow motion, through my fingertips. But I was so close to the ground it didn’t break. It just went kerplop.

Now and then, a car would go by, and I’d straighten up, pull it together. Somehow, staggering with fatigue, we made it up Jessieville Hill to our street. Our little house had never looked so beautiful. When my father got home that night and saw the urn, he shook his head. When my grandmother heard what we’d done, she nearly fainted. No one could believe Mom and I had carried that heavy thing from town. Over the next days, my father filled the urn with gravel to steady it against the wind, and my mother arranged in it an explosion of satin flowers. When it was moved to the cemetery, my father drove it there. When it was moved to my grandmother’s at the end of summer to winter in the old pigpen, now used for storage, my father drove it.

My parents eventually took over the farm from Mummu. When she passed and joined Paappa in the cemetery, the urn paid tribute to both of them. It sat between their stones over forty-two summers. One recent spring, when my mother sent my brother to the pigpen to get the urn, he found it broken. Mom and I took to the cemetery instead a wooden cross, bright with yellow flowers, and tapped it into the ground. It was hard to do. The urn had become such a constant.

I’ve been thinking ever since about the day Mom and I bought the urn—the hard distance we carried it. I’ve been thinking, too, about the viaduct. About twenty years ago, it was closed to traffic and demolished. One of the classes I took in that high school close to it was Latin, and I’d always been intrigued by the viaduct because it reminded me of the great Roman aqueducts that carried water into the city. The name of the bridge, viaduct, had its roots in Latin words meaning road and to lead. Crossing the viaduct with the urn marked transitions in both my mother and me—it led to new life.

After we took that crazy walk, my mother’s grief passed. And something passed for me, too. Later that summer, our family went camping with friends, and one morning when I was awake but still in the tent, I heard my mother tell her friend that, in the year since my grandfather had died, I’d grown up a lot. She was right. My junior year, which followed, was the first in which I was far enough past the difficult stage of adolescence to feel human again.

After my brother found the urn broken, he emptied it and weighed it. With a piece of the pedestal missing, it weighed twenty-one pounds. If I’d known, that day in the feed store, the urn was that heavy, I might have decided differently about carrying it. But my mother and I did carry it. When I’ve been lugging something heavy in life, when I’ve come up on some looming viaduct or run out of sidewalk, I’ve remembered what the two of us were able to do, as reed-like as we were, and I’ve known to press on and not to try to go it alone. My mother and I were dumb, yes, but we surprised a lot of people—even, and most happily, ourselves.