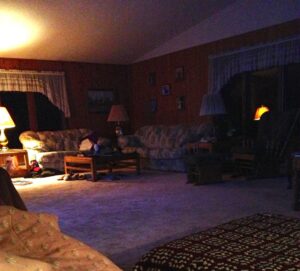 All of a sudden, life will go to hell, as with this pandemic, as in the sorry things it’s revealed about us as a culture. Long before the virus, though, one of the hardest times for me was when my father died. He’d been failing, visibly—but knowing what was coming barely blunted the pain of losing the family structure we’d all relied on. In a corner of my parents’ great room was a daybed, with a second mattress that hid underneath. I took the picture above from that bed, in the days after my dad died. Whenever we were all at home, there weren’t enough beds, so we improvised, many of us on the floor. My youngest sister and I slept in those twin beds. The night I took the photo, I had just gotten into bed, fatigued by a day spent getting our mother’s new existence in order—death notifications, changes to accounts. My siblings were still awake, playing a board game in the dining room. In the low light of the great room, hearing their voices, I felt comforted. Hard times in my life have been interspersed between mostly good times, of course, and it’s tempting to wax idyllic about the good days. But they weren’t perfect, either. The past wasn’t perfect by a long shot—but life was “right,” in the sense of its unfolding, of gradually growing toward wisdom. What I’m saying is, there’s a gift even when things go to hell.

What got me thinking about this picture—what got me thinking about writing this reflection—was turning on the television, one cloudy-dark morning a couple weeks ago, and discovering an old movie was about to start. The Ghost and Mrs. Muir. I flipped to the channel just as the movie title filled the screen, and I was suddenly back in my parents’ great room. Some years before my father died, I’d gone home to visit my folks, just the three of us, and after my mother and then my father had gone off to bed, I turned on the television in the great room just as The Ghost and Mrs. Muir was starting. I sat there with the lights low, on the floor close to the TV so I could keep the volume down. I felt suspended, wrapped in a sort of holy peace. I knew my good fortune, having my elderly parents with me still, both well, peacefully asleep. The great room was warm, the lights dim, and my mind was at rest in the ghostly story unfolding on the screen.

Lately, I’ve been yearning to be there again, in that room, on that night. If I close my eyes, I can feel it, but the sensation goes when I open them.

I can never have that night again. My father is gone, and my mother no longer owns the house. What I’m yearning for, of course, isn’t really that night or that house. What I need is the peacefulness of those hours. What I miss are the people of my life, especially those who have shared it with me from the beginning. But I can’t have them either, during this time of Covid, at least not as I have in the past. Many in my family are scientists, and when they say the virus lurks, that we all need to be careful, I believe them. I’m not willing to gamble that getting together now, living life as usual, won’t take more of us away. This present isolation makes me yearn for the past before Covid, before my father died—an idealized past that never was, of course. All I have to do is look back forty-five years, to see it.

Forty-five years ago, I was a junior at the University of Wisconsin’s Madison campus. One October evening, I sat at a study carrel on an upper floor of the College Library. The building is beautifully situated, looking out over Lake Mendota. I was an English major. My boyfriend, who sat at the carrel next to me, was studying bacteriology. We spent many of our evenings there, to stay focused as we studied. But we had a tight circle of friends, and we often met them somewhere after we’d finished—at a dimly lit German-themed bar next to the stadium, for instance, where we’d order brats and a pitcher of beer, the sounds of live folk music in the background. Some nights we’d swing by a neon-bright bakery in time for the evening’s first batch of doughnuts. On others, we’d head to State Street for exquisite hot fudge pound cake sundaes at a small place whose name I don’t remember.

It was an idyllic time. Imperfectly idyllic.

Sitting at the study carrel that evening at the library—done with my work and waiting for my boyfriend to finish his—I felt frustrated, bored, and I toyed with the floral-design bracelet I was wearing and wrote my angst out in this little untitled poem. I scratched it into one of my notebooks, and as a writer will, I later typed it out and placed it into a blue-gray binder with other things I’d written:

Here
contemplating
my eyes gaze down
on fragile fingers
connected to
a slender wrist and
engraved pewter bracelet.
Of late I feel
bewilderment at the
tarnish
that has touched each
blossom . . .

The poem is dated October 22, 1975. My boyfriend had given me the bracelet. Even then, as carefree as my life was, I was feeling bewilderment, yearning for something I didn’t have. Anyone who studies literature could observe that I was experiencing “the human condition”—all the things that make us human, our shared joys and sorrows and fears, our ambitions and motives. Making a positive difference in the world wasn’t much on my mind then. My concerns were personal. I was yearning to be married, and I eventually was, to that boyfriend—but it eventually ended, sadly. We weren’t one another’s forever after, but we learned from our mistakes and have each done better with a marital relationship since. We have even managed to remain friends. There were multiple gifts that emerged from that painful period when our marriage went to hell. One of which was, at the age of thirty-two, I grew up.

As bad as this pandemic is, it has an added level of sorrow for me—the state of things in Wisconsin and Michigan. Those two states are “home” to me. I grew up on the border between them, and I am eternally glad for the years I spent in Madison. When I wrote my novel, I set part of it on the Madison campus. I loved living in Wisconsin—was inspired by how progressive and independent the people that I knew were. Today, it’s distressing that COVID-19 is off the charts and swamping hospitals there, in that state that has meant so much to me. It pains me that people are so self-focused that they refuse to protect one another by taking simple steps like distancing and wearing masks in close situations in public.

Nor can I fathom the situation in Michigan. I was born there, grew up there, and have always been proud to be a Michigander. I’m embarrassed, though, now, to say it, because it’s hard to express pride of origin for a place where people, multiple people, have been arrested and charged with plotting to kidnap a governor, with an apparent aim to spark a civil war. There aren’t words to describe how that makes me feel.

I voted last week. Or I should say, I dropped off ballots at the county court house. I had to sign affidavits to turn in my husband’s and my mother’s ballots. I’m relieved that our state, Minnesota, takes the pandemic seriously and is offering multiple ways to vote safely. My mother is cloistered in her senior living apartment, just down the street—has been since March—and my husband and I have opted to go into public only when necessary. One at a time, wearing a mask, is our motto—lessening our chances of bringing home the virus. Maybe it would do nothing to us, but it might also kill us. And then there’s my vulnerable mother—and the others who live in her senior complex. I’m able to see my mom a couple times a week at this point. Following state guidelines, our visits require keeping a distance and wearing masks. I’m acutely aware that there’s more than myself to worry about in all this.

Turning in our ballots that day, I felt a whirlwind of emotions.

I was heartened that so many people were there. There was an intensity of purpose in the room, evidence that men and women were making up their minds to be heard, taking their civic duty seriously. But I also felt a bit sick, a churning in my head and my gut, knowing that there are political people in positions of power who are openly and actively thinking up ways to disqualify our votes.

If that’s not a hell—going through motions doomed to failure—I don’t know what is. Even when things go to hell, though, I have a stubborn faith in the future. In this political quagmire, I see another gift, which is that in this instance, too, we’ll learn from our mistakes and do better. I look to young people to be the strongest antidote to what ails us. They will learn from our mistakes, as my generation learned from our parents’ and grandparents’ mistakes. Vietnam, for one. While our government hasn’t changed its ways much, the conflict in Vietnam sent thousands of young people a bit older than me into the streets and into lifelong political activism. The gift in that unrest was that it planted a seed in me that eventually grew into a politically engaged adulthood.

I know what you’re thinking. Yes, our current crop of young adults may be writing self-indulgent poems into the pages of their notebooks, like I did. (Remember the human condition?) Or more likely, they’re writing them into some app on their phones. But with our frightening lack of care for the earth, our failure to face what’s happening with the climate, young people now have every reason to rise above youthful self-interest sooner than I did—and they have moral legitimacy to come out in force and demand the right to shape the world they’ll live in.

I have faith it will not be the sorry world we’ve presented them.