What You Dare Not Say 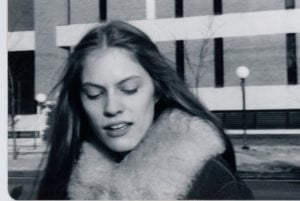 What You Dare Not Say

I feel ridiculous, and the feeling grows each day. I feel presumptuous and ridiculous, to think that as a writer I have anything worth saying when oceans are rising, the planet is burning, and the TV screen pulsates with images of people visiting horror upon horror on one another. Still, something insists that my fingers pick up the pen, and when I do, I listen, and I think, and now I have come to one conclusion. When there is nothing worth saying, say what you dare not say.

This photo of me was taken on campus my junior year of college. I don’t look thrilled that it’s being taken, but I have few pictures from those days and am glad to have it now. It was winter, and I was enrolled in second-semester Spanish. I was exploring life, minding my own business, when something happened one night that upended me as I was preparing for that Spanish class. I’ve told the story I’m about to tell to very few, because something like what happened that night is private. You hardly understand it yourself; yet you keep it close to your heart.

It was late. My housemates had gone to bed.

I was lying on the swayback couch, my Spanish text open on my chest. Learning a language is of course tedious, so much rote memorizing, but I loved the cultural aspects of studying Spanish—learning about Día de los Muertos, for instance, The Day of the Dead.

From experience, I knew my family’s relationship to deceased loved ones was strong, strong on mourning and grief. It was puzzling to me, then transformative, to see another way of understanding death in the Day of the Dead celebration: so life-affirming, with people dressed as skeletons, dancing and singing, building extravagantly decorated altars to welcome back to the festival the spirits of deceased loved ones, who continue to be part of the family even in death.

That quiet night after my roommates had headed to bed, I memorized and did assigned exercises—leaning the book, when I needed to write, against my raised knees.

An hour ticked away, and finally I was done. I closed the book, left it on the couch, and walked through the silent apartment to my shared room to get my toothbrush and contact lens case. My roommate was asleep, so I walked in quietly, guided by the bathroom light shining from the hallway. In one uninterrupted motion, I picked up my toiletry bag from the dresser, noted the red numerals on my radio alarm, and then, inexplicably, dropped myself face down onto my bed. “Just for a minute,” I thought, cradling my face in my folded arms.

It made no sense—it was not like me. There were those contacts to take out.

What happened next I couldn’t have predicted—in fact, given the strongly rational bent in me, I’d have thought it impossible. I later preserved the basic details in a poem that I’ve worked on over the years, in my efforts to understand. What happened that night? Why? And why had I always felt it to be significant that—dare I offer—I was studying Spanish?

I do (dare). The poem is below: “Studying Spanish, Late at Night.”

Making art is for me intuitive. Ironically, the early version of this poem contained no Spanish. I’ve added the Spanish words only recently. Today, after forty-three years, I don’t remember the content of the lesson in my Spanish text that night—but as I studied, I was thinking half in English, half in Spanish. Only recently did the idea surface that the poem should reflect that fact.

The first phrase that emerged from my mind as I worked on the revision was por favor, meaning “please.” Then my subconscious tossed out ayúdame. My memory was that it meant “hear me,” but when I looked up the translation online, I was startled to see the words “help me” pop up on the screen. It took me aback, because I saw at once the rightness of it.

and rest my head on my arms. Suddenly,
I’m not in a crummy apartment on Spring Street—

but somewhere else, unasked for, unexpected,
and there’s a child in my lap.

Quiet, attentive, he follows with his hands
as I read to him from a large book.

It’s the Christmas story, and I’m perplexed
when the words I speak take shape across the sky.

Dromedaries appear on the horizon. They lope
upward, from east to west above a dogwood tree

fails, and the child turns to me, this ladrón,
the one who comes in the night.

His eyes steady and grave—
mira ahora, they say—

he reaches up to put his arms around my neck.
His body resonates with heat—

expands, infinitely. I shut my eyes,
but light so bright I could be lidless turns

my face away. Instinctive and afraid, chagrined
and shamed—unmarried, as I am—

I speak my lover’s name, but before I can
articulate our sin, I hear

as if through ether, far away, a chuckle,
then a voice amused at my naiveté.

“Shower the boy with Love,” it says—
then my eyes open,

and the million cells of my body lick with flame
for days, my feet when I walk

float six inches off the ground, and I
cannot speak of it. Por Dios.

One does not speak of this.

As the word “Love” evaporated into silence, I lifted my head and looked at the glowing red digits of the clock. Three minutes had passed. I rose from my bed, levitated to the bathroom. Something cellular had happened in me. I felt on fire, my feet skimming above the floor. I brushed my teeth, screwed my contacts into their case, and floated back to the bedroom.

The next day, when I tried to tell my rather surprised boyfriend what had happened, all I could do was weep—shaken, heart-bursting tears. I walked around for days feeling irrationally happy. I felt loved. The physical effects gradually wore away, but the emotional and spiritual effects lingered. I didn’t run off to join a congregation the next day—but I eventually made my way through the church doors.

Any fit between organized religion and me is an imperfect one, but I certainly will never, not ever, be an atheist. What I encountered in those three minutes my junior year left me free, free from an attraction to dogma or to a “right” belief system, free to be human, to be flawed, and to serve, in the biblical sense, in my own way. And I have. Even my novel is a response to what happened that night on Spring Street. I created its variously gifted but flawed characters as honestly and lovingly as I could—what happened that night never far from my mind.

For me, making art is much like falling into an altered state and then lifting surprised eyes to the glowing digits of the clock. It matters—that I was studying Spanish the night that I was visited by that luminous child. He spoke no words, but the message in his eyes was clear: “Look now, and see.” My fledgling efforts at Spanish, to grow beyond the culture of my birth and to embrace another’s, opened a door to something life changing—and it matters that I should say so now, with so much of humanity being inhumane, and the palpable suffering around us being inflicted disproportionately on our Hispanic sisters and brothers. That the phrase “help me” materialized from the ether as I worked on the poem makes utter, if unsettling, sense. Who needs help more now than Spanish speakers fleeing perilous conditions south of our border?

In a small, calm corner of my rational and at times chaotically resistant mind, I know who I met that night in that crummy apartment. I met Love, love that embraces this world, puts its arms around all of us, everywhere—and it asks our love in return, both for the planet that sustains us and for the messy complexity that is humankind.

Sometimes, that means saying what you dare not say.