Wednesday, Again: On Art, a Hurricane, and Stepping on Toes 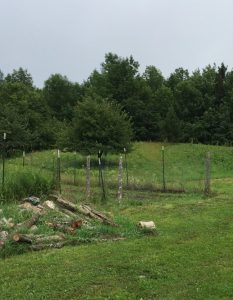 The Dreamy Hill of my childhood

The poet Emily Dickinson wrote, “I’m Nobody! Who are you?” I’ll whisper that line to myself. It’s an affirmation of my desire to live lightly, to not impose myself on any person or creature. I just want to be quiet, to write my quiet books and practice my art. When you dance with Art, though, it’s trouble. Art brings its own tricky moves—and it’s not just the two of you in the dance. Art thinks nothing of adding a third partner, or even a thirteenth.

Take, for example, last night. I’d worked all day on this post. It was painful—too many ideas from some flat place in my brain, some of them pathetic, others belligerent, and all with their own tone and tempo. At the end, I had one dreary paragraph that had changed by the hour. In the evening, I packed it in and went to church.

Now, it might strike you as interesting—or weird—but I find the universe to be strewn with just-the-ideas-I-need, just when I need them. All I have to do is listen. When I drive, I’ll sometimes say, as I did on my way to church, “I’d like the next song to be a message.” Then I open my ears. If I’m in the throes of writing, as I was last night, I hold my breath. Will Art bring something desirable, or dicey, to the dance?

Often, I’ll listen and then I’ll shrug. If that was a message, I didn’t get it. But last night’s next-song turned out to be just what I needed. I wasn’t sure who this new dancer was, but a search on the Internet this morning tells me the song is titled “Unwritten” and that it’s sung by Natasha Bedingfield. The lyrics are about life as a book, about letting go of your inhibitions and writing the rest of the book.

Later, the pastor joined the dance . . .

What struck me in his sermon was the biblical idea of taking up your cross, not something onerous, as it’s often thought of, but a twist—the cross as something you’re good at. My immediate thought was of writing, an art I’ve devoted years to, and more particularly of this blog post and its difficult start. Staring me in the face was fear. I knew generally where the post was headed, and if Art got the upper hand with unfamiliar rhythms and movements—if it pulled some dangerous sort into the dance—the whole thing could go downhill. I could end up stepping on unlike-minded toes.

It wasn’t always that way.

I remember a night when I was eleven. My life at the time centered on family, books, and dreams of the future. My brothers and I had gone with our dad to visit our Salli grandparents. The farm was magical. Next to the house was a small, dreamy hill that seemed enormous as we climbed toward the clouds to loll about, and then we’d run or roll down. The barn was of the earth, dark and warm—it smelled of rough wood, of animal heat and urine and manure, of scoops of grain, and over it all, the fragrance of a mountain of hay.

I learned to milk a cow in that barn, to send a streaming ribbon right from the teat into the open mouth of a half-wild barn cat. (Yes, grandparents really do teach grandkids to do that.) I knew where to find the new kittens that the mama would hide in the reaches of the haymow, and I stood with wonder beside the pen of a just-born calf—would feel its hot breath, the warm suck of its mouth on my fingers. I knew my hands were on the germ of life.

We all loved being at the farm, my dad especially. It could take a good hour, on leaving, to actually get out the door. On that particular night, I went out to the car ahead of the others, assuming we were actually leaving.

I was wrong. It was fall—the air was crisp, and fallen leaves were scuttling around. I could feel the hill, dreamy in the dark beyond the arc of the yard light, and I began to dream along: about growing up, who I would be, where I would go, whom I would find to love. There were no certainties—though those would surely come—and no limit to my imagining. When Dad and the boys at last emerged from the house, I felt sad that my private reverie was at its end.

Readers often ask me which of the characters in my fiction is me. Straightforward enough—but not on my end, because Art and I are partnered in that shape-shifting dance. Pieces of me, of my experience, join hands with those sometimes-sublime, sometimes-shady others that Art has no compunctions about adding to the dance. When I was dreaming in the car that night of some well-defined, grownup self, I couldn’t have anticipated the answer I would someday give to those questioning readers: in some sense, every character is me.

Yes, a fruitful mess, though. In my play, The Rock Farm, there are two sisters, one a childless English professor and poet—the other, the sister who stayed close to home and who watches over their parents. That sister is going through a divorce. Those two women live out parts of my experience—they feel what I’ve felt. I’m a poet and a teacher. I have lived through divorce and have no children, and I eventually settled close enough to my hometown to be able to be a presence through my parents’ later years.

The major characters in my novel, A Notion of Pelicans, are also all in some sense me.

Rena, the pastor’s wife, comes from the U.P. of Michigan, as I do, and we are both worriers. Lucy, the brassy business owner, grew up impoverished and is one to tell it like it is. I grew up in a working class family where cash was at times scarce, and I generally say what I think—though I’m quieter about it than Lucy is.

Then there’s Claire, the young actress. With Claire, I share the confusion and pain of divorce, and also a natural mysticism. I suppose that way of seeing is why I’m okay with talking to radios. Finally, Toni, the sociology professor, lives the life of the mind and sometimes finds the practical side of life befuddling. Life is just not what Toni thinks it should be. Amen, I say—I’ve also thought that.

I am all of these women, and I haven’t even broached my connections to the lives of their men . . .

Emily Dickinson is my poetic grandmother—but Walt Whitman is my poetic grandfather, the man who proclaims in Song of Myself: “I sound my barbaric yawp over the roofs of the world.” Many see Dickinson and Whitman as the grandparents of American poetry. Their two voices and sensibilities couldn’t be farther apart, but if you’re called to write poetry, who better to teach you how to milk the cow?

Another line from Song of Myself often comes into my head: “I am large. I contain multitudes.” Whitman says in the poem that he is “of the old and young, of the foolish as much as the wise, / Regardless of others, ever regardful of others, / Maternal as well as paternal, a child as well as a man, / Stuff’d with the stuff that is coarse and stuff’d with the stuff that is fine.” Whitman saw himself as Northerner and Southerner, cascading down a long list that includes raftsman, coalman, teacher, learner, farmer, artist, lawyer, physician, and even a rowdy. He saw humanity as connected, and himself as everyone.

When Whitman showed up at the dance as I was writing this post, I didn’t think a moment before taking his hand. Hurricane Harvey had made landfall, and as it sent its rivers of rain over southeast Texas, I saw the truth of Whitman’s claim that he could “contain multitudes.” In my ordinary living room, with its couch with the dog-scratches on the cushions, the images on my TV screen told me we all encompass humanity. We are the people in the threatening floodwaters. We’re the beautiful rescuers, in their makeshift flotilla. We are the tired, the displaced, the comforted, and the comforters. We’re even the artful dog, moved by some force to procure a brilliant bag of kibble and hurry along the soggy street. Image after image dropped me to my knees and left me speechless.

It’s just as the books said, the many books I’ve loved. Rich or poor, of whatever identity, or creed, or color—differences fall away in the face of our shared humanity. We need to live that ideal, to feel it when we’re on our knees and when we stand back up. There’s a time for quiet, and a time to shout over the rooftops, the watery rooftops. Do I step on toes? Very well, then I step on toes.

This gamboling dance comes to an end. But Art is a crafty partner. It has its moves and wiles, and it knows I’ll be back, to sway again in the arms of an idea.