Twice Full of Words: On Writing and Sisters 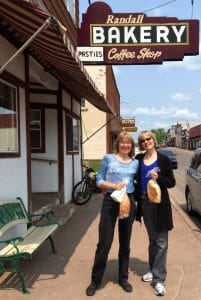 Writing Sisters, Back Home in the U.P.

My grandparents had apple orchards, right next to their houses. As my grandfathers grew older and stopped mowing the hayfields, apple trees popped up everywhere. I like to think it’s a metaphor for my family. Quite a few of us on my mother’s side are writers, and I see no surprise in it. One of my mom’s grandfathers was a writer in Finland, the original tree. Growing up, I would hold in my hand the one book of his that we owned, and I’d burn with certainty:  this, this shaping of words, was my purpose. More than fifty years later, I still feel it. The story I’m telling today is of writing and sisters. Like me, my sister Doreen Salli is a poet, and she might say the same thing about that book our great-grandfather wrote.

A writer friend of Doreen’s once commented on our sisterly connection. When Doreen introduced us over coffee, he suddenly smiled this bemused smile and said, “You two are different halves of the same personality.”

The writer friend had it exactly right. If you see Doreen and me walking down a hallway, I’ll be the one twirling and flashing open the red lining of my coat. I wear my joy on my sleeve. Doreen will glide by unfazed, serene, only to go home and plant milkweed with joyful passion, and then raise and release monarchs—encouraging everyone she knows, and everyone they know, to do the same.

We’re comfortable together. Apart, we tend toward reticence—observing, taking stock.

She and I were born of the same parents, into the same extended family. We grew up in the same community, spent what we consider magical hours at the same familial farms (remember the monarchs?), and attended many of the same schools, including where we earned our undergraduate degrees. When I began teaching during graduate school, Doreen came to class with me once when she was visiting, and one of my students said, “You two look wicked alike!”

We did. At that time, we both had long, straight hair nearly to our waists. What my student couldn’t see was that we were also alike in the things we wrote about. We’ve worked for years on a collaborative manuscript of poems, Letters to a Sister. It treats our Finnish heritage, our connection to the land and lakes where we grew up, the values we were given, the way we navigate life and love, the uniqueness and idiosyncrasies of the people who have shared our world. We write about the very same things, and yet, do it differently.

I think of it this way. I tend to start with an idea and move into images. Doreen has told me that she most often starts with images and moves into an idea. To get a sense of what we mean, consider two of our poems—about sauna, the bath of our childhoods.

My poem is “Saunassa Illalla,” which translates from Finnish as “in the sauna at evening.” It’s a personal poem, about going to sauna as young adults with my sisters. When we were home in Michigan, we loved going to the savu sauna, or smoke sauna, which was generally the first building immigrant Finns like our grandparents built on their farms. A smoke sauna had no chimney. The smoke from the fire swirled around the interior of the sauna until the rocks heated up and the fire was allowed to go out. The sauna was both bathhouse and smoke house—at times, rows of fish hung from the rafters. Over the years, the sauna walls had become dark with soot, and it smelled heavenly, a mix of wood smoke and soap.

This spare, blackened building lends its fragrance
to the field.
Pines bow to its dovetailed corners.
Built before house, before barn,
in the Finnish fashion,
it knows our single-file approach through the trees,
our towel-burdened swivel.

All day we have loved
the smoke wafting from the open door,
our own woods burning;
our water, mineral-soft and hot
on the stones, carried from the pump in buckets
and in pant legs.

Saunassa illalla. The candle burns.
Its brief tongue paints our shadows
on the dressing room wall. We drop our clothes,
open the washing room door. We have known
this before, this warm dark into which we move:
the smooth tiers and the rough floor,

the steam rising, water and rock together, the oldest
of foes, wed by our young hands and an old dipper.
We sigh—this dance we know—
and think of our men,
who know our skin in ways that we do not.

Saunassa illalla. Our soapy hands shine
in our particular buckets, as we trace our bones
and our hollows. We know
our solitude, the solace in this ritual.
I see it in your faces

as we trail out into the hayfield, wet
and clean beneath the languid moon. If we were children,
we would join our hands
and dance for the sheer joy of nakedness,
in the half light of innocence
saunassa illalla.

If I had to choose a favorite from among my poems, Saunassa Illalla might be it. It has appeared in various ethnically interested publications over the years—The Finnish-American Reporter, New World Finn, Lake Country Journal­­—and I even put it into the middle of my play The Rock Farm, about a fictional Finnish-American family.

Doreen has explored our ethnic heritage through personal poems, too, but for one sequence of poems she found herself imagining a character. That sequence develops the same themes and uses many of the same details and images I use—but rather than writing personally, she created an elderly Finnish-American man named Arne, whom she describes as a composite based on many such men we’ve known and loved. Arne is grieving the absence of Anna, his apparent wife and the mother of his children.

One of the Arne poems follows, “Arne after Sauna.” It was included in The Place That Holds Our History: The Missouri Writers’ Biennial Anthology, a collection of poetry by Missouri state arts grant recipients. You’ll likely need help with the Finnish in the poem: Mitä kuuluu means “how are you?” and paha poika means “bad boy.”

In the snow I see your face again,
but old now, lined from many
winters. I’d almost forgotten
Mitä kuuluu, paha poika,
words that sliced the evening
sky outside the shack
like birds. All dead, and ashes
of their feathers on the snow
outside the sauna. I am
clean, and steam rises from my limbs.
My mouth is frozen shut.
My teeth are dark inside my mouth.
I smile at night, they freeze up
into stars.

In the snow I see your face again,
but old now, lined from many winters.
Mitä kuuluu? I’d almost forgotten
how you pushed my head down into the center
of the bucket, and scrubbed and swirled
my hair until it squeaked between your fingers.
Paha poika, and the thick snow held the world
outside in quietness, as water sang
upon the stones and danced before the steam.
So much heat we couldn’t breathe, so we left
and dressed by lamplight, in the cold room
that cracked into December. And the drifts
reached even to the windows as the dying
coals chirped like winter birds into their wings.

The heat has worn me out
tonight. The moon hangs sharp
as the tip of a twelve point buck.
The pines are nice at night.
Your eyes are nice at night,
and seven times I’ve seen them merge
with mine, in different colors,
shapes, behind the Lappish contours
of an eyelid. And the wild
roses lean now on the shoulder
of the snow. No bucks or roses
then tonight, no bottom feeders
like the carp we used to dry
and smoke to sweetness on the ceiling
in the sauna. No skins lovelier
than yours was in the lamplight,
pale and hickory steaming in the carbon
coated darkness of these walls.

I’ve been in that sauna—never mind that it’s Arne’s sauna. I know those eyes, so nice at night, the contour of those eyelids. It’s the heritage Doreen and I share with many who are close to us.

I’m the oldest of the Salli siblings. I was followed by two brothers, who kept my life happily chaotic, but I longed for a sister. When Doreen, the first of my sisters, finally arrived when I was six, she fulfilled all I’d hoped a sister could be, and then some. When our mother placed her for the first time into my waiting lap, I didn’t know how rich my life had just become, how twice full of words it would be.

Leave A Comment – Twice Full of Words: On Writing and Sisters