Their Grandmother’s Couch – On Memory and What Beckons 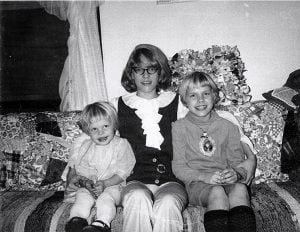 On the wall at my grandparents’ house hung a picture—a night scene with a wolf on a hillside, a reproduction of a painting by Alfred Kowalski. I was drawn to it, would gaze into it and imagine the story of that wolf. When I grew up and wrote a novel, I put the Kowalski print into it—hung it on the wall at a character’s house. Details from my life show up often in my writing, especially from childhood. The things that surrounded us when we were young stay with us. Occasionally, they’ll shimmer into conscious memory, beckoning with a gentle hand, calling our attention. Consider the photo at the top of this post, taken years and years ago of three girls on their grandmother’s couch. Those girls are my sisters and I.

From the eyeglass frames I’m wearing, I know that I was mid-way through high school. My grandfather had passed, and my grandmother, Mummu, was alone at the farm, the Kowalski print still on her wall. Looking at the photograph, I first thought those three girls and their sisterly bond were the reasons for my interest in it. They are—but the longer I thought, the clearer it became that my interest is just as much the couch and what’s around it. Certain things in that room, like the wolf print, will appear suddenly in my memory and draw me into reflection. I expect my sisters would say the same.

I’m the oldest. Doreen is next, and Diane the sweet baby. When I pulled the photo from my collection of family pictures and showed it to our mother, she pronounced us all adorable, which of course she would. The immediate thing that struck me, looking at the photo, was that I had forgotten how much older I am than my sisters. We have two brothers who followed me, so Doreen and Diane were a good ways behind.

After I left for college, my parents took over Mummu’s farm. My sisters did a lot of their growing up there. Their experience of it is even deeper than mine. That house was “home” for the ensuing forty years. After my father passed, Mom made the hard decision to sell the family homestead. All that remains now are photographs and our memories.

Consider again the photo taken on Mummu’s couch. That window behind us, looking out on the orchard, is important. After my mother and father took over the homestead, they built an addition on the orchard side. That window became a wall, a ghost window. I still feel the wonder of looking out as a child at twilight-draped apple trees. Back then, when our grandparents lived there, an iron bar hung from the limb of a crab apple tree.

Some nights, as darkness fell, our grandfather would suddenly go out and strike that bar with a hammer, guiding a lost hunter home. I still hear its wail. I see my grandfather through the window, his swinging slow and measured. Years later, I included the sounds and sights of those nights in a play, The Rock Farm, a play about home and belonging. That iron bar rose out of my memory and into a fictional family’s story, along with the ghost window and a grandfather with a hammer.

After my own grandfather passed, his chair, the chair he’d rise from to go out to the orchard, was still there. It was part of the view from Mummu’s couch. From a child’s perspective, high on the wall above his chair was a bookcase, and among the books on its shelves was a small novel, written in Finnish by our grandfather’s father. My sisters and I couldn’t read it, but that book was revered. It cast a spell. No wonder Doreen and I became writers, and Diane a librarian who could be a writer, too. I fully expect that one day she’ll find herself holding the pen.

On the wall kitty-corner from the bookcase hung a cuckoo clock—a broken clock. It had never worked, that I could recall, but was never taken down. As I grew older, I learned that the clock had been a gift to our grandparents from our mother’s oldest brother, whose death at thirty-nine changed the family landscape. Of course the clock stayed on the wall. While I was working on my play, that broken clock rose up in memory and beckoned to me. It, too, became part of the fictional family’s story, but for them it was a gift from a deceased aunt.

When The Rock Farm was performed the first time, in Finland by Theater Fiasko, the back wall of the set was covered with clocks. It created a strong sense of waiting. The characters in the play are women—mothers and daughters, sisters and cousins—and yes, they are waiting, for family members to return home through a storm. One of the women passes the evening sitting on the floor, cutting old clothing into rags.

Those fictional rags can be traced back to Mummu’s couch. Behind us three “cherubs” in the photo are a crazy patchwork quilt and an even crazier patchwork pillow—and beneath us, a rag rug. All were made with rags that Mummu had cut from old clothing. Our mother used to own one of Mummu’s crazy quilts. It covered one of the upstairs beds for years, until it finally fell apart.

It isn’t gone, of course. Not for those who slept under it.

Mummu’s quilt stays on inside my head, with the Kowalski print, the bookcase, the cuckoo clock. All those things swirling and pointing at me from my memory inspire me as a writer. A German poet, Rilke, still much admired for his wisdom, wrote that if a writer were locked away, cut off from normal life experience, she could draw on the rich memories of childhood. I know that, implicitly. I write from my childhood even without being locked away. Simply to describe and reflect on the seemingly small things that my sisters and I saw, sitting on Mummu’s couch, would be an encyclopedic undertaking.

It would be three volumes—mine, Doreen’s, and Diane’s.