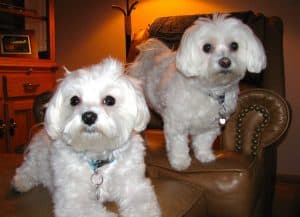 Sweetest Dogs in the World: Lessons of the Heart

Bruce and I are teachers. That morning of January 20th, Bruce had left for campus, and I was about to follow to teach my 8:30 class when Libby yelped in distress.

I turned, to see her writhing on the floor. Within seconds, she’d come out of it, with no sign the seizure had happened. I’d been seized too, with fear. Libby wasn’t just a dog—she was my girl. My emotions were tied up in her. I called the vet, arranged to take her there after class, and left. Before noon on that cold January day, my fear was realized. Our Libby was gone from this world.

When I was young, the one thing I’d wanted was to have children. The second, more tentative part of my plan was to write books.

I imagined myself—at the typewriter writing a novel (which I would, in fact, eventually write), clacking away effortlessly, without pause, my husband and towheaded children around me and a dog and cat sleeping nearby. Life eventually took me to a different place—no kids, a teaching career, the discovery of a cat allergy, and a more realistic view of writing. (As in, it’s hard, with more stops than starts.)

Adopting Homer and Libby put an end to that vision I’d had of the writer’s faithful dog. Neither of our dogs had much patience with my sitting for hours at the keyboard. Before long, there would be a canine groan, and then a noisy shifting of positions, and finally, pleading eyes from Libby, and from Homer an indignant yap. They were completely different personalities but worked beautifully together to achieve their own ends.

Adopting them changed my life. I had to focus my mind and heart outward—could no longer spend entire days lost in my imagination.

We’d adopted Libby first. When we got her, she was a small ball of fluff. Baby Libby didn’t walk—she bounced. The first time I took her to my parents’ home, she danced out of the pet carrier like a dandelion wisp blowing across the yard. Just one glance, and my parents too were in love.

Libby wouldn’t eat alone. It wasn’t enough for me simply to be there. For the first many weeks, she had to sit on my crossed legs and have me feed her pieces of kibble, one by one. Her face was hysterical, a wonder, turned up at me with her jaws crunching each delicious piece!

Those first weeks, Libby pestered me, nipping at my hands and ankles with her little razor teeth. It’s a canine gesture of affection, but I didn’t know that then. Her nipping was nonstop. At one point, I said to Bruce, “I don’t know if I can keep this dog.” She didn’t do that to him. It was special, reserved only for me.

Fortunately, she grew out of it, and our lives were richer for having her. If there was a lap available, Libby was on it. When I’d grade composition essays, she and I would sit on the couch, Libby in my lap. I’d place the papers in turn on a notebook that rested on her back. She must have known every one of my students by smell.

As teachers, Bruce and I had summers free, and Libby got used to our being there. But oh, when we went back to work! Walking out the door each day was terrible—she was visibly lonely, worried and depressed. There was nothing to do but get her a sibling.

That’s how Homer came into our world. I like to call him “Homer T”—the “T” for trouble. When Libby and I went to meet a litter of Maltese puppies, the smallest of them climbed into my lap and began to lick my hands. And licked, and licked! He had chosen us, by God—we weren’t leaving without him!

That’s pretty much Homer’s personality. He wants what he wants. From that moment, a division happened in our house. Homer became Mama’s Boy—and Libby, Daddy’s Girl. It wasn’t something Bruce and I did. The dogs decided on their own and then lavished pure devotion on us.

Now that Libby’s left us, Homer is quieter.

The two of them could set up a ruckus at times. They worked as a tag team, especially at mealtime as their food was being dished up. When one stopped barking, the other started. They were sure that the more energetically they sang, the faster sustenance would be delivered. I suppose they weren’t wrong about that.

With Libby gone, mealtime became quieter, and Homer suddenly realized he had two people he was responsible for and began to divide his time. That huge love of two dogs settled into the one.

Homer became more habitual, quirkier. Things have to happen each day in his certain order—from eating, to playing with his ball or his stuffed fox, to the bedtime ritual. Bruce has to be the one who takes him for a last outing into the yard. The day hasn’t ended well for Homer until Bruce tucks him in.

Libby is still with us, somehow.

Sometimes, when Homer has been off somewhere with me, Bruce has heard her footsteps, or during a nap, he’s felt her weight settle on the bed. Sometimes, Homer looks at me—and for a moment Libby’s eyes are looking out of his face.

It twists my heart, but in a good way. If it’s our shared imagination, I’ll take it, gladly. That first evening after Libby died, Bruce and I sat on the floor entwined together like a pretzel. We could do nothing but weep. Nothing before in my life had made my heart break like that.

What I know of the love of parents for their children, I know as an outsider, an observer. My life played out in such a way that the parenthood others take for granted was not to be part of it. But because of Libby and Homer, the sweetest dogs in the world, I have experienced my own unique nuclear family. I’ve thought of Libby and Homer with every decision, doing and not doing things because of them.

Because of them, I have a sense of the love and concern that parents feel for their children, love that I’ve seen in mothers and fathers wherever I’ve lived, everywhere I have traveled—a love without borders. What I have done for the good of Homer and Libby is a faint shadow in comparison.

A long time ago now, I lived in Boston, and I was invited to a luncheon at the home of a friend. She and my husband were academic colleagues. It was spring, and there was a simple, lovely vase of pussy willows on the table. Certain emotionally tinged images from my life stick with me—those pussy willows among them.

A woman from France was at the luncheon—I have always loved what happens when cultures mix, as they do so naturally in an academic community. She had her little girl, Amandine, with her.

Amandine was three years old, maybe four. She was a charming, elfin child, and she was fascinated by the pussy willows. I had just turned thirty and was beginning to see that everything in my personal life was about to change, and I might never have those children I’d yearned for when I was younger. It was not a bad time in my life, but it was complicated. It always is, when old hopes are replaced by new.

The hours at that luncheon table were poignant ones for me, watching that mother and her child. I’ll close with the poem that came from that experience, thinking of the intricacies of a parent’s love, and of those hours with Amandine.

Lovely little French girl,
little almond
of the rainy afternoon,
you look so grave
as you stand beside the pussy willows.

Were I to have a child,
she would look like you.
And I’d keep pussy willows on the table, too.