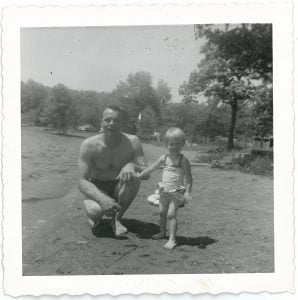 I always knew I was going to write, to be a writer. When I was four, my family lived in town, close to a high school, and I would watch the kids walking by on their way to-and-from school every day. I remember the acute envy I felt. What I don’t remember, but have been told of repeatedly, is how I pestered my parents. When can I go to school? There was something magical to me about words. I would sit at my father’s knee, as he read the newspaper, and run my eyes over the fascinating squiggles on the page. I felt this overpowering call to get to the bottom of them.

Getting to the bottom. It’s what as I see as the writer’s mission. That sounds so purposeful and controlled. The truth is—I puzzle a lot over the notion of truth—writing is not controlled. Sometimes you, the writer, are in the driver’s seat. Sometimes what you’re writing throws you into the back seat. It’s hard to know who’s driving the car.

People often ask me if what I write is “true.” In other words, is it factual? I say, yes. And then I say, no. My plays and my novel, A Notion of Pelicans, are most clearly not true in that sense. I make up stories, a plot, and I conceive characters who are not real. They could be—they’re human, as flawed and noble and real as I know how to make them, and they feel the feelings I have somehow felt in my own life, whether I felt them personally or out of the deep well of empathy.

“But,” someone might insist, “poetry is true, right?” And again, I say, yes and no. I’m a poet who writes out of her own life, but I will stray from the truth for Art. Because what I’m really wanting is to get at Truth with a capital T. My life—like everyone’s life—has presented challenges. Life has at times taken me to the bottom.

Take, for instance, my father. That’s who’s kneeling beside me in the photo above. My work, especially my poetry, talks a lot about my father. The first poem I published, which appeared in Quarterly West, is a father poem:

of the largest trout,

and the coolness of it

With the tip of his knife,

on the flat surface

of a rock next to me.

and we watched unspeaking

as it throbbed slower

until the caring went out of it.

This is my father, to a T. He took us kids fishing, swimming—he was always showing us intriguing things. He would not dream of picking up a pen, but he talked in metaphors. Everything was “like” something, some odd conjoining of ideas or images. I vividly remember watching the fish’s heart slow and stop. I remember the fascination that kept me there, though the fact of the dying heart made my breath stop. I’ve had a lifelong preoccupation with hearts. This little poem is as real, as true, as can be.  Except it’s not.

The person I watched clean the fish that evening, who unfolded before me that pivotal moment in my life, was not my father. It was my young uncle, not much older than I. The truth of the poem is not whom I was with—it was the heart. The truth of the poem is life, how it persists and persists, in the face of its own ending. I have a strong sensitivity to the sounds of words. As I wrote the first draft of the poem, getting to the bottom of that memory, the word “uncle” clunked. It’s that simple. The hard “k” sound of it didn’t fit and flow. The word “father” did, though—it slid right by, beautifully, and it also brought a closer connection to the two people in the poem. The poem was richer for the change.

Not long after I’d written “The Heart,” something happened that made the little narrative in the poem resonate more deeply. My father had a severe heart attack, which he somehow survived, and from that moment on, the heart—his heart—became our family center. My sister is a poet, too. Guess what she writes about.