The Elephant in the Room (Or, The Tap Dancing Writer) 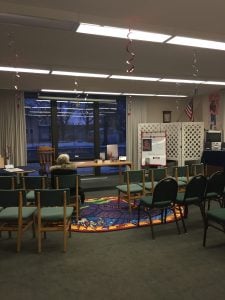 My mother, my oldest fan, in the quiet before one of my book talks.

I have a confession. I don’t have a ten-second “elevator pitch” for my novel. When people ask me what A Notion of Pelicans is about, what kind of book it is, I do a song and tap dance. I haven’t found a pithy way to describe it.

Confession is a good word for me to use, because the book is set around a church, as is evident from the book description on the cover. That description was the hardest thing I’ve ever written. It took a solid month of back-and-forth drafts between me, my first readers, my agent, and my publisher. But at last we had a text that did justice to the different threads in the book, and we were all satisfied.

The first thing I say, when someone asks, is that the heart of the story is the characters’ struggle to live with integrity. It’s a shifting mark, individual and slippery to define, despite the characters’ collective presence in the Pelican Church pews. There are no cookie-cutter souls there, no easy faith. But there’s another thread in the book description that’s just as important and apparent: the characters’ shifting hopes and obsessions, their protected infidelities.The novel is just as much about love, relationships, and sex—the blessing and bane of it all. When I approach that part of the book, I do it with a wry grin and raised eyebrows. “Umm . . .” I’ll say, “just so you know, there are saucy parts.”

Now, these conversations generally take place with people who haven’t read the book. People who have read it, rarely say anything. I’m used to it. It’s been my experience throughout my writing career, no matter what genre I’ve written in. But a couple weeks ago, I did an evening book talk at a library down the road and got knocked on my ear.

The first thing the warm and effusive librarian said was that she’d been waiting to talk to me about my book! A person has to love a librarian. She had read the book, not certain what to expect, and now wanted to know what I’d been thinking, what I was about, in putting into the novel the various things that I had. I’m summarizing and paraphrasing here, but she essentially asked, “Is your book churchy, or sexy?”

I chuckled and told her to stay tuned. She’d anticipated my talk.

In a lovely synchronicity, I had decided to start addressing the elephant that’s in the room when I talk about my book. The unspoken question. What angel or demon had inspired me to put spirituality and sex into the same book?

If you’ve been following my blog, you already know the first story I told the group that night. When I was a girl, I dreamed of writing a novel, but in college I fell in love with poetry. Then suddenly, in my early twenties, I stopped writing poems, because I’d gotten a clear message from the lit classes and creative writing classes I was taking: Romance is not a worthy subject for serious work. I told the group at the library that romantic love had been pretty much my only subject at the time, and that I’d struggled over my natural impulse to write about it—but that eventually I’d decided I didn’t care what the literary world thought of love and romance, and I started writing poems again.

Many of those poems were about love, of course, love with a lower-case “l.” Love, as in sex and romance. What seemed a lifetime later, in my forties, I finally set to working on the novel I’d dreamed of as a girl, which eventually became A Notion of Pelicans. There’s no surprise, I suppose—the novel, too, explores sex and romance . . . love with a lower-case “l.” But the twists that come with aging give a person new eyes. Notion also explores Love with a capital “L” . . . divine love, spiritual search. My book isn’t “churchy” in the traditional sense—but it yearns deeply to know what we don’t know.

In some ways, I could still be that 20-year-old, intermittently paralyzed by uncertainty. I’m well aware that, in weaving together in my book what might seem to be contradictory and jarring strands—in linking church and sex, without trivializing faith or whitewashing passion—I’ve given readers a book they have to figure out for themselves, that will ask them to look inside themselves and do some figuring there, too. It’s a scary business, for them and for me.

My experience in this world has suggested to me that we humans are creatures of the physical senses, but that we also have a need for connection to something beyond, something ineffable. For me, the ineffable involves spiritual search, an ambient listening, and there’s no divide, in my thinking and being, between the physical and ineffable, between body and spirit. I most love works of art that explore both. In writing my novel, I wrote the book I wanted to read.

My characters do some dancing of their own, juggling a mix of notions and emotions. They’re in need of love and sexual fulfillment. They also need connection to that something inexpressible, a search that brings them, imperfect as they are, to Pelican Church, with its mysterious legend about a white pelican.