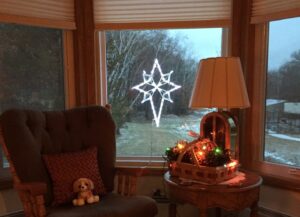 If you stay with me, I’ll tell you what I saw. But first, you should meet my mother and understand how it was, the evening she passed. She was born a preemie, delivered at home on the farm, and she spent her first days in a large shoebox on the open oven door of the wood stove in the kitchen. I read recently that many preemies grow up to be reserved, even shy, that they prefer solitude. It didn’t surprise me. That was my mother to a T—she was a modern-day hermit.

Even though she lived her last years in a senior living community, she preferred the quiet of her apartment to attending events for residents. But she believed, as I do, that we’re all connected, and she loved to read the things I write. She would light up with an embarrassed happiness whenever I’d write about her, and I expect she’d react the same to my sharing how it was, the evening she died. My hope is that, in hearing our story, others might be comforted. They might see they’re not alone in their own experiences with moving through deep water. 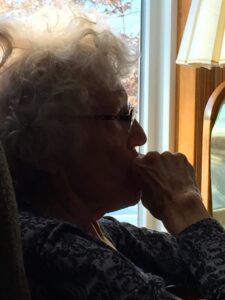 The rocking chair in the dormer was my mother’s favorite place to sit. It had been my father’s chair, when he was alive. I love this picture of her sitting in that chair, which she didn’t know I was taking. She didn’t like having the eye of a camera on her. Taking the picture quietly, I was able to capture that pensive look, how her face is hidden in shadow. Everything about the picture strikes me as right. There’s so much we don’t know about the people we love, even the people we’ve known all our lives. We humans are a deep pool of emotion—so much stays hidden.

I was alone with my mother when she passed. We had spent the last two days doing what my grandparents used to call “doctoring”—a four A.M. phone call from Mom had become a fear-tinged drive to the ER, our hearts full of dread. Mom had awakened confused and dizzy, after hearing what she described as an explosion in her brain. But CT imagery showed nothing, and a clinic visit the following day likewise revealed nothing clinically obvious.

So there Mom and I were, that last afternoon, just returned from the clinic, about to eat a light supper. She’d recently turned ninety, had become both frail and unsteady. I was increasingly fearful she’d pass away when she was at her apartment alone, leaving me to wonder how it had been, whether she’d been afraid or passed peacefully. As it turned out, I was spared that. I know how it was—both sudden and quick, what she’d prayed for—sudden and shocking, as if a lightning bolt had descended.

The shock of it blurred all that followed. My call to 9-1-1. Being instructed to do CPR. Then, in a tight sequence, the arrival of paramedics, then police officers, and then staff from the coroner’s office. Soon after, my husband joined me, walking over from our house a few blocks away. As the various agencies did what they needed to do, we went to the lobby, and I made a phone call to one of my sisters, asking her to call everyone who should be told. Finally, I was allowed to call the funeral home, at which point my husband went home to feed the dog. Life, strangely, still had to go on. Soon the funeral home rep arrived. By the time everyone finally left, and I locked the door to Mom’s suddenly bereft apartment, it was nearly time for bed.

Grief is so unfathomably powerful.

Falling into my husband’s lap when I got home, I wept, from my guts up to my throat, trying to get the words out, to tell him, finally, now that we were where no one could disturb us, how it had felt to do the first compression of CPR and to hear my mother’s very porous ribs crack. I barely slept that night, hearing the horrible crunching, again and again.

Mom’s last days were complicated by the pandemic. Covid has been especially hard on the elderly. My mother, living as she did in congregate housing, spent most of her last year and a half in isolation. Being a hermit, she did amazingly well, but even a hermit can only take so much. I was her caregiver, the one consistently allowed visitor. Mom told me more than once how frustrated she was, to sense that her time was winding down and, because of circumstances no one could control, to be locked away as it was happening. All I could do was nod and wring my hands. After she had passed, I felt relief that she was free. Without Mom to worry over, I was left with unlimited time—unlimited time and a hole in my heart to store it in.

I felt devastated, then I felt fine. I felt hopeless, and then fine. I had little ambition to cook or clean or write anything new—but what the hell, that was fine, too. I thought of the words of Ecclesiastes: “A time to weep, and a time to laugh; a time to mourn, and a time to dance.” I decided to be patient with myself.

I watched a lot of TV, and the smallest thing on the screen would make tears well and my throat swell. The emotion had little to do with what was on the screen, of course, and everything to do with Mom’s passing. I went through the next months unable to outright cry. Then, one day, up to my elbows in a bread bowl, a wounded animal suddenly emerged in me—groaning on each in-breath, moaning on the out-breaths, unceasingly, until its breath ran out. The Bible would call it a lamentation, breath-robbing sorrow over the growing list of those I’d lost to death. I had never met that feral part of me so starkly, nor understood how much it fears its own end. Fortunately, that wild part of me keeps mostly to its den.

A dear elderly friend passed away this week. She and her husband lived down the street, and we all attended the same church. She’d had much sorrow in life and had been open about it. Again and again, she would say, “A day at a time.” It strikes me that, in the nether world of grieving, that phrase should be amended to “a step at a time.” On the morning of March 12th, I woke just before five A.M. It was dark, and cold. Very cold—we’ve had a real winter here, this year in Minnesota. Snow, and cold, and more cold, the snow heaped up into serious banks. Rolling over in bed and checking the clock, I stretched, then swung my feet to the floor. At our house, our dog, Dani, and I rise first. We visit the yard, then make coffee and her breakfast.

I trailed out to the yard, dragging the last traces of sleep, my collar up, shoulders hunched against the cold. The sky was very dark, very clear. As Dani sniffed, searching out the perfect spot, I turned and looked over my shoulder to the north. It was as if I had heard something, or felt something telling me to turn. And it was startling—I turned just in time to see a falling star, plummeting to the horizon. It was far off in the atmosphere, of course, but from where I stood, it looked as if it were right above the trees behind the houses across the street!

Now, I’ve seen meteors shoot across the sky—thin, white streaks of light, there for a moment, then gone. But that isn’t what I saw, out in the quiet of our yard. The star burning over our neighbors’ houses flamed brilliant green, the color of those green bulbs in the basket of Christmas lights next to my mother’s chair. Nor was the star a thin streak—it was a fireball, the most beautiful thing I’ve ever seen in the sky, like a green comet falling to earth, its tail aflutter, shooting out behind. Even the streetlights didn’t diminish its intensity.

The length of it, from head to tail, equaled the measure of my hand held up to the sky. I saw that extraordinary dazzle for a count of three, maybe four, then the head broke into pieces that flared and flamed out—the tail disintegrating, disconnected from its source. I’d been in the right place at the right time to see a falling star’s last sparks. From that moment, my grief softened.

The timing of it—my being there just then—had been so unlikely. I went inside heartened, exhilarated, grateful, and woke my slumbering husband to hear what I had seen. All day, I was jubilant at my sheer good fortune. But it was impossible not to wonder if I’d imagined what I saw. I checked the Internet repeatedly over the next days, to see if anyone else had seen my falling star. And they had. News sources reported the meteor had been seen widely, over Iowa, Illinois, Minnesota, Wisconsin, Manitoba, and Ontario. There’s even a video on YouTube, recorded from a greater distance than what I saw. Here’s the link, if you’d like to see it. But be forewarned, if you’re sensitive to profanity: there’s colorful language on the video.

People have always wondered about falling stars, of course. Some have thought they were harbingers of calamity—others, that they were signs of impending good fortune. The ancient Greeks believed they were souls of the dead moving through the sky. My sense as I stood in the yard, staring to the north after the star flamed out, was that my seeing it was a blessing—both in the astronomical sense of having seen with my own eyes a natural phenomenon that few have witnessed so dramatically, and in my personal spiritual sense. As illogical as it might seem, the star’s flaming across the sky in my season of grieving seemed a double sign: that my mother and the others who have passed on are well, and that my life will proceed as it is meant to.

Of course, I’ll never again step out under a clear, dark sky without that sudden look over my shoulder, listening and watching for . . . who knows, what fresh wonder?