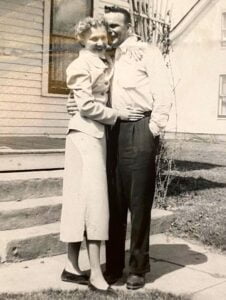 As we emptied the house when my mom sold our family farm, a few years after she was widowed, I took the candle for my own. 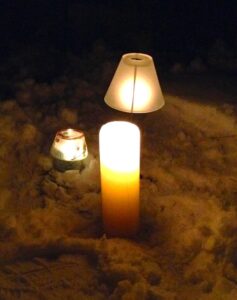 Candles in the Snow

Here’s a picture of it out in the snow, on our last Christmas Eve at the farm. It’s the pillar in front of the shaded candles. When I ask myself why I think, as I do, that my parents are now together again . . . when I imagine them side-by-side, somewhere invisible to me, which always prompts the rational half of me to start shaking its head . . . I just think about that candle, and it does away with my doubts.

The candle came into our lives in the parcel-laden arms of my youngest sister. She and her husband had it as their unity candle when they got married. They were married at home, on the farm, in the great room that had been transformed into a chapel. It was an intimate, lovely setting. The room had three walls of windows, and the trees and fields outside seemed part of the room. As the ceremony began, a quick-moving thunderstorm was approaching, and the light outside and in the room lessened as the winds picked up. It began to feel like an evening wedding, in the middle of the afternoon.

When it came time to light the unity candle, the newlyweds held their separate tapers to it, and it caught fire, flamed beautifully, then blew out, likely from a gust of wind through the slightly cracked patio door. A simultaneous gasp rose from all of us gathered there—such a sad metaphor, if not a bad omen—and then a wisp of white smoke snaked upward from the candle. One second . . . two . . . three . . . four . . . Everyone held their breath, thinking, what now? Then, unbelievably, the candle relit, as if by an invisible hand! We gasped again. I knew that, whatever the future might bring, the marriage was blessed, and that this was one special candle.

After the wedding, the unity candle got left at Mom and Dad’s, where it passed the next two decades tucked into a corner on the bottom shelf of the cabinet above the dryer. We all knew it was there—we’d see it when we were at home and used the washer and dryer, or if we went into the cabinet for the pair of scissors that lived in a tin on that same shelf.

When Dad passed, in 2012, we’d known the time for parting was coming. I’d told my siblings, who lived farther away and didn’t get home to the farm as often as I did, that I thought this would be the last Christmas we’d have with Dad. But he took his leave sooner. Our Christmas gathering that year was minus one and wrapped in all the complicated feelings of grief.

People are so kind when someone else suffers loss.

When a pastor friend of mine who is Finnish by heritage—as my family is—learned that my father had passed, she e-mailed to tell me of a Finnish custom on Christmas Eve. Families there go to the cemetery and light candles, in memory of family members who’ve passed on. They have extraordinarily beautiful cemeteries in Finland. If you’d like to read about and see pictures from those exquisitely lighted Christmas Eves, here’s a link. My pastor friend encouraged me to adapt that beautiful custom for myself, to light a candle somewhere out at the farm on Christmas Eve, as part of remembering my dad.

When I told my mom and sisters what she’d written, we searched the house for candles. Out came the unity candle. It would be the perfect Christmas Eve Candle. It was still days until Christmas, so the candle got left on the dryer to await Christmas Eve, as we went about the mind-blurring details of bringing one life to an earthly close, and reconfiguring another for life alone.

Suddenly, it was Christmas Eve.

I realized with an actual start that it was evening on the 24th, and I remembered the candle ceremony. But nowhere could we find the Christmas Eve Candle. It had been on the dryer—now it was gone, and no one knew where. My mother checked the cabinet over the dryer, in case she’d unthinkingly lifted it there. It wasn’t in the cabinet. Both my sisters searched it. I think my sister-in-law did, too. Nothing.

Disbelieving, and a bit desperate with grief, I checked it for myself. I took everything out of the cabinet, both shelves. But the Christmas Eve Candle wasn’t there. We searched every cranny in the house. No candle. We had to put sad, small candles out beneath the trees that night for the candle ceremony, nothing like the Christmas Eve Candle.

The first words out of our mouths had been, “Dad took it—Dad hid the candle.”

And we meant it. Our dad was an affectionate tease. He loved to tell a joke, or to catch us up in a good story. He used to roust us from our childhood beds in the morning by inching his smiling face around the doorpost and cheerily announcing, “Daylight in the swamp!” We knew he would take the unity candle and enjoy the aftermath of the taking. We knew he would push his long, strong arm into the depths of the Christmas tree, then watch in some sort of ethereally boyish delight as it fell over. The tree did suddenly fall that year, when we were all sitting quietly in the great room, each of us privately focused, nobody moving.

My family has experienced many unexplained happenings connected to loved ones who have passed. I’ve told some of those stories in an earlier blog post, “Ghosts, and Other Frightening Things.” If you like a haunting, and you can stomach a bit of real-life scariness, here’s the link. For my father to hide the Christmas Eve Candle—reaching out somehow from beyond—would be just one more chapter in a story of many years’ making.

Eventually, we all had to return to our own lives and homes, and my mother spent her first days alone at the farm. Not too many days into her changed life, she called one day. “I found the candle,” she said.

“In the cabinet above the dryer, where it’s always been.”

We both started to laugh. Of course. The cabinet where it had always been.

It could be argued that one of us had played some sort of trick. But hiding and returning the candle with a flourish would be just like my dad—and he didn’t seem to be done yet. As the first Easter after his death approached, Mom went into the hutch for the Easter egg-shaped candy dish she’d made in ceramics class, only to find it was now gone. She searched the hutch. The candy dish was nowhere in it. It was nowhere to be found. She gave up, apart from complaining to me by phone that now the Easter egg candy dish was missing. “It’s Dad,” we agreed.

Weeks later, during which none of us had been at home to play another trick, she went into the hutch for something else, and there was the candy dish—back in the spot where it always was.

You might be wondering, why I’m telling you this?

Well, like my dad, I am prone to catching people up in stories. But it’s also because I know that you too have lost loved ones, been left in some state of wondering and hoping. I’ve not said much here about my mom’s passing, and there’s a reason. It’s just a month now, too close. A dear cousin who, a few years ago, walked as caregiver through her own mother’s last days—as I did with mine—told me, when Mom passed, that time will be my friend. I will be able to remember my mother young and vital again. I believe her. My dad’s passing taught me that a day will come when grief lessens and a floodgate of remembered stories will open.

For now, I will say this: my dad wanted to spend 100 years on this earth, a wish he wasn’t granted. His periodically showing up somehow, to remind my mother of him and to care for her, makes perfect, loving sense to me. But my mom, as she aged, was ready to leave this world, whenever it happened. Since she passed, I have watched, out of habit and hope, for things around my house to go missing and reappear. But nothing has—not even the magically relighting Christmas Eve Candle.

My husband and I are living in a deep quiet. I understand the pensive ordinariness of our days to mean that my parents are reunited somewhere. They’re happy—neither needing nor wanting to hide candles. It’s just like what that beautiful picture of them managed to catch. They’re wrapped up together, and sweetly in love.