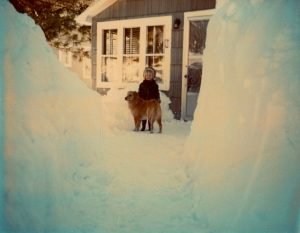 My father had worked as an underground iron miner. After his mine closed, around the time I was six, he worked as a laborer at a small construction company. Money was hard earned and hard to come by. It was then that we moved into the gray house.

At first, we were renters. Our landlady thought she would return someday, so she stacked most of her furniture into a towering maze in the bedroom at the top of the stairs, then shut the door. Our parents decreed that room off limits. So of course, once I was old enough to babysit, as soon as they went out, we’d take the stairs two at a time, open the forbidden door, and go in. It felt holy, to stand there examining another family’s belongings and imagining their lives. The incursion was especially fruitful at Christmas. Those of us in the know about Santa were aware that if we squeezed our way to the closet in the far corner of the room, we’d find our Christmas presents hidden away, unwrapped.

The landlady eventually abandoned her thought of coming back, and my parents bought the house. Away went the stacks of furniture, and I, being oldest, was given the honor of moving, alone, into the room. By today’s standards, the space was primitive. The light fixture hadn’t been updated when the rest of the house had been. A bare bulb hung from the ceiling, which I snapped on and off by standing on the bed and reaching up. It felt different, oddly romantic, and—budding writer that I was—I liked that. When the fixture was eventually changed, I felt a bit sad.

That room is a place in the house that I recall so strongly at times, especially when I get into bed at night, it’s like I’m there again, lying in my bed. The house had a wood and coal furnace. On winter evenings after we’d been away all day, we would come home to a cold house. I’d run up those noisy wooden stairs to my room, pull off my clothes, and squirm into an icy flannel nightgown. Then I’d leap for the bed and crawl between even icier sheets. The shivering was delicious.

My father, after emptying the car of whatever we’d left behind when we got out—books, toys, homework—headed for the basement. Upstairs, lying safely in my bed, I’d hear the furnace door being opened—the sound came up the ductwork and out my heat register. Dad would shake the dead embers through the grate, then toss thunderous chunks of wood or coal in. The odor of the fire catching worked its way up the stairs to my room. Eventually, I’d smell the ductwork heating up, and the room would begin to warm. By the time I was asleep, the cold was well subdued.

One night, the cold was more than subdued. It was Christmas, and the house became sweltering. My father had to deal with a roaring chimney fire. My mother woke us, our coats and boots in her hands, and guided us out to the yard. As we passed the dining room table on our way out through the front porch, I stopped and stared. The tall red holiday candles on the dining room table had melted and folded daintily over on themselves. They were bent like ballerinas, touching their palms to the pretty glass candleholders. It’s still amazing to me that the house could become so hot, without burning down.

What I remember most viscerally about that house is the wind. It played the house like an instrument.

On stormy winter nights, gusts would smash into the corner of the house, wallop after wallop, then moan along the eaves. I never hear wind like that today. I suppose few of us do, living in our modern, sealed homes. The gray house was drafty—I suppose not insulated. Lying there at night, listening to the wind, I knew that the world outside those walls was wild, beyond our control.

Sometimes I dream about that house, particularly the front porch. That porch was connection—it was where our mail dropped through the slot, where guests came and went. Our family mostly used the back door, close to the car that was parked in the yard off the alley. The back was private—the front porch, public. We spent a lot of time in the front porch, hanging out on its small couch. With windows all around, the front porch was our eye on the neighborhood—it told us who was around, doing what. When neighbor kids knocked to summon us out, it was at that door.

The gray house looked like all the other mining company houses, but the families in them were unique. The neighborhood was in its way diverse, despite the racial sameness of that place and time. We were Finnish Lutherans, surrounded mostly, and for the first time, by Eastern and Southern European Catholics. We went to Sunday school—they to Catechism and Confession. They went to Mass, we simply to church. Two traditions, living out one mandate: Christ’s commandment to love one another.

The cooking odors in the neighbors’ houses were amazing. Goulash, gnocchi, ravioli, baklava. Strangest of all, they didn’t eat meat on Friday. Everything about the neighbors was mysterious, foreign.

We moved into that house at a time when such ethnic and religious divisions mattered. We kids eyed one another uncertainly—I’m sure our family seemed equally unfamiliar. But as we got together, the way we thought about things, and about each other, changed. There were squabbles, of course, but whatever issue would get worked out. We had a few bullies among us, who would appear from the margins. In retrospect, their presence was valuable. In dealing with them, we developed survival skills, like sticking together. Perhaps most importantly, they taught me how I didn’t want to be. I’ve thought of those kids over the years, wondering and hoping that experience showed them a better way.

I now think of the kids in that neighborhood as part of a big, bubbling family. We had such freedom, to just be kids. We spent daylight hours in little groups. The girls played hopscotch, or stepped it up to Chinese jump rope. We concocted simple parables of motherhood and marriage lived out through our dolls. The boys played ball or built mysterious forts along the abandoned railroad tracks. We rode our bikes everywhere. Since the neighborhood had been built on top of a high and sprawling hill, we seemed to be pedaling always against gravity and the wind.

In the evenings, until well after dark, both girls and boys gathered on our street as one rambunctious tribe. As we got older, the unspoken question was who likes whom? Our games then were tag, or hide and seek, our voices loud and our feet pounding. I think with grateful wonder of the many widows who lived in the houses around us. They never chased us away—they must have been saints.

I grew up poor, by financial measures—my early years especially. There were consequences to the mines’ closing. My father eventually started at the copper mine an hour’s bus ride away, which made life easier. He wasn’t alone. Many fathers in our neighborhood and across our town made that two-hour bus ride every day. They did it out of love and care for their families. Those men were their own tribe, nodding at the bus stop, greeting one another at Friday night fish fry.

Today, so many people and forces are intent on dividing us—over how much money we have, or where we come from; over the level of our formal education, or what we do for a living; over where or whether we worship, the color of our skin, the languages we speak. People throw labels at one another, like deplorable or, with a sneer, liberal. It feels good, self-affirming, to do that, but the labels aren’t true—they’re simplistic. Life is complicated, both private life and community life. People are complicated. That tactic of dividing is what the bullies did on the playground. They got the kid—the target—alone. I didn’t like it then. I like it even less now.

I fear sometimes that our increasingly loud, grown-up bullies will keep us separated, powerless. But then I think of the gray house, of life behind that comforting front door, and I know that love wins, with the help of Father Time. Over the years that my family made the gray house our home, all the differences of religion and ethnicity that had seemed so threatening and divisive, when we first moved in, fell away. My fearful heart rests when I think of the young. I know, as surely as I breathe, that today’s perceived divisions will fall away, too, as new generations knock on one another’s doors and discover the likenesses behind them.

It’s natural, and as unstoppable as the wind.