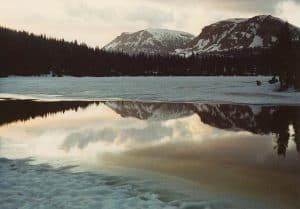 Stories from Mountaintops – My Utah Mountains

One of my stories takes place in western Massachusetts where the landscape is dotted by gentle mountains that Emily Dickinson used to write about. On the last day I lived there, I stood on a very high hill—the remnant of a mountain—with my parents and my sister. It was late May, a day of hazy sun and thin clouds.

I’d just finished graduate school—commencement had taken place over the weekend. Since my divorce three years earlier, I’d lived frugally. I didn’t own a vehicle, so my sister and folks had come to help me move back to the Midwest, where a teaching job waited. My belongings were packed, and the U-Haul trailer was reserved for pick-up in the morning.

It was the last day of my previous life—a poignant day.

I was grateful to be at that transition point, a bit weary after intense years of study following the sad last years of my marriage. What better place to spend that day than on a mountain, the past and future spreading across the landscape below? We’d followed a walking path through the woods until we reached the top and arrived at the Peace Pagoda, a Buddhist shrine dedicated to world peace. The New England Pagoda was the first built in the U.S., and I wanted my parents, especially, to see it, to gaze on the large statues of the Buddha that line the circular pagoda. I wanted them to witness the way people of many faiths would stack columns of stones around the pagoda. To build the little pillars was to send prayer into the world—petitions tangible and perpetual as long as the stones stood.

I stacked a pillar of my own that day, with so much that was uncertain ahead of me. There weren’t many people at the pagoda. My sister and I walked down to a shallow pond on the pagoda grounds. The pond’s bottom seemed inhospitable—rocky and without plant life, an amazing place to be teeming, teeming with tadpoles. The pollywogs had begun their metamorphosis. They were a squirming throng. What happened next was so emotionally affecting, I shortly after wrote a poem about it, which eventually appeared in the academic journal Communitas.

Here’s what happened that morning on the mountain:

Tadpoles at the Peace Pagoda

The pond teems
in its basin of rock.
Dark bodies of tadpoles fade
to incipient spots
down the spine, sudden legs
bewilder at tails.

Toad-heads
ascend by the score.
My awed eye takes in each
one, as they jockey
to tongue the pool’s underlip.

On the far bank
children play. A pair
hold pollywogs in their palms,
heads close. A third hurls
his pollywogs out, skips living
stones across the surface
of the water.

The molting throng
consider me. On the pagoda,
stone-piles spire—the eye
of the drowsing Buddha wavers
in its sleep.

Every square inch of that water was in motion. My sister and I knelt at the pond’s edge, amazed by how it percolated. One by one, the pollywogs shouldered their way to the surface and touched to it their snouts. I swear, as each one did, it stared at us. (Stay with me.)

Seeing all those staring eyes, a line of questions collided in my head. Were the pollywogs aware of their fellows, sailing through the air? Did they hear them hitting the water . . . smack . . . tiny explosions inaudible to my sister and me? What did they want or think that we could do? Or did they know nothing at all? The tadpoles were identical in form but unique in energy. Little tad-souls. As I thought ahead to the unknowns of my professional future, of my new independent identity, I felt as much a part of the churning, hungry world as they were. Is this, I thought, how we look to God?

The Western concept of God doesn’t apply to the Buddha—I knew that. But God as I know God was on my mind and with me there. The life freed-from-desire sought in Buddhism was beyond my grasp. I didn’t even want it. Still, I had been attracted to the pagoda and to the statues on it. The one that most drew me was the sleeping Buddha. I stood and stared at it a long time, questions again colliding in my head. My divorce had taught me about being alone. The Buddha’s closed eyes struck me as metaphor for how orphaned we can feel in life. How, I thought, can those enlightened eyes not open? How can they hear the world’s need and not look around?

I was thirty-five, that year.

Ten years prior, as I was just beginning to examine life more intentionally, I had my other mountaintop experience—that mountain an indisputable craggy peak. My first husband and I were backpacking in Utah, where he was doing his graduate work. We weren’t much for taking trails. In fact, where we were hiking, there weren’t any. We bushwhacked—read topographical maps and walked from ridge top to ridge top. Our rule of transit, advice from a geologist friend, was never lose altitude. We’d come miles from the nearest road—even farther from human habitation.

One evening just before sunset, we reached a small lake nestled beneath the jaw of a mountain’s high face. There was little to no vegetation—it seemed a setting from a distant planet. Rock, rock, and more rock. I was tired from negotiating tough terrain. I had in mind a pitched tent, a fire, some dinner, and, considering how cold the mountain was about to turn when the sun went down, something hot to drink. But there was good daylight yet, and my husband was intent on a view from the summit.

That’s how I came to be left alone there at the lake. The water was so clear, I could see to the bottom, a mosaic of huge boulders broken from the mountain face above. I found a place to sit that was slightly elevated and provided a wide view of the lake. There I waited, my eyes running along the intricately crossed angles and edges of rock below the surface. It was so quiet, a peaceful world. The sun dropped . . . dropped . . . inching down, moving to its union with the peak behind me. At last it passed behind and was gone, leaving me in shadow and the lake smoky gray.

I’m amazed, looking back, that I agreed to my husband’s going off without me. I was not the bravest young woman. He’d taken the map. Had some accident befallen him, if I’d not been able to find him or reach him, how would I find my way out? We were in bear country, in rattler land, and there were cautionary tales of rogues on two legs. As dusk dropped from the peak, I looked around more often. I looked with greater care.

It was then, when shadow was complete across the lake, that I found myself no longer alone. In the lake, something appeared. I want to call it a fish. But it was like no fish I had seen. I want to call it an eel, but that, too, is wrong. It was a sea creature, half-fish, half-eel—pale, primitive, embryonic or ancient, something from a legend. (Bear with me.) Its skin shone translucent white, tinged by the color of the water, as if it lived without the sun, made its home in some underwater dark.

The creature emerged from between two rocks and swam up to the surface below me. There it hovered, fins beating. The most amazing thing was that it knew I was there. It watched me. The creature seemed to have something it would say, something that in the lack of a language between us, I was unable to receive. I had sense enough to know, though, that I was seeing something extraordinary. Something in that creature’s attention to me was outside the realm of normal experience. It finally descended, disappeared into a crevice. As I’ve gone through life, I’ve thought back to that unspoken communication again and again.

Strange? The Book of Exodus says that God spoke to Moses on a mountain—from out of a burning bush—and told him he was standing on holy ground. That’s how I now, from the vantage point of my sixties, view the ground of my mountaintop experiences. They were spiritual, yes—but not passively. They made demands of me. They strangely shaped me.

At the Peace Pagoda, I received the invitation to an engaged life, a call to see myself in the whole of creation and to care for it, rather than to focus my expectations on the next world. That means acting out of compassion for every creature, human and animal. It means speaking out for the voiceless, orally and in what I write—even, and most especially, when I’d rather zone out in my safe and sheltered living room. Remember that false electronic sun?

On the shore of the Utah lake, I was given a glimpse of something startling—a glimpse that has kept me from settling, as I so easily could, into what comfort can be found in this life, never mind some transcendent life. I live mostly through my intellect, which has its dangers. The jarring glimpse I had of that creature living its hidden and sentient life in the watery fissures of a Utah peak has kept me from falling into intellectualism, into dismissing what I can’t explain.

An old hymn, “In the Sweet Bye an’ Bye,” speaks of meeting in the next world on a beautiful shore. My hunch, this dreary third week of January, is that there will be a mountain on that shore, and among my hopes for life in its shadow is this. I expect to meet my sea creature there—along with tadpoles and Buddhas and others who challenge or bewilder me—and to understand at last what they have to say.