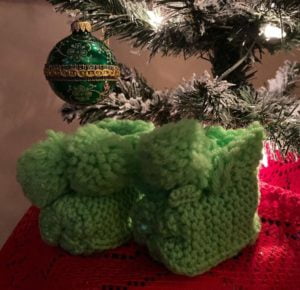 It’s December again, the month my grandmother, Mummu, passed away. This year marks forty years. In my linen closet is a small box that contains the baby booties pictured above. Mummu knitted and gave the booties to me when I was an awkward, skinny girl who wanted nothing as much as I wanted to become a mother. When she presented them, she said, “In case I die before you have a baby.” That was Mummu, forthright, down-to-earth. I never did have that baby. But I have kept the booties tucked away, and when I notice the box as I go to the closet for sheets, they remind me of her. The booties speak to me about disappointment, too, and the way life has soothed it—more broadly, the way life gradually prepares a person for what lies ahead. Sometimes, you just know that the future you’d imagined will not be yours, and you come to face that hard fact with acceptance, even a sort of embracing.

Life has prepared me for things to come in some unusual and perplexing ways. The first has been through intuition, a gut feeling—the sort of inexplicable sense of something about to happen that many of you have also likely felt. My most startling experience with that sort of thing happened as I was starting graduate school.

I was in my early thirties when I moved alone into an apartment on the bottom floor of an old house, situated on a narrow, two-lane road into campus. All day, traffic whizzed past; at night, the street was quieter. I had arranged to have a phone installed—this was before cell phones—and as was common in a college town in the first weeks of an academic year, I was far down the queue and had to wait weeks for an installation date.

My apartment was cute, comfortable. But I couldn’t stand to be there. I had a feeling—something dreadful was going to happen there. I knew it, and I’d make up reasons to spend as little time at home as possible. The second weekend in that house, the dreadful thing happened, outside, in the street.

When I heard it—an echoing, grinding crash that sounded like it would come through my wall—I was in bed, just falling sleep, and I sat up with a sharp breath. This is it, I thought, eerie recognition washing over me. The neighbors upstairs had a phone and were in a position to help. When they heard the crash, they went out to the yard. The voices outside were clearly audible. Over the next hour, as the walls of my apartment strobed with the lights of emergency vehicles, the story of what had happened out there unfolded.

Poetry—the focus of my graduate studies—was and still is my way of recording experiences that are emotionally important, as a way of understanding them. Later that semester, in writing workshop, I wrote a poem about what had happened that night outside my apartment, which was eventually published in an anthology from Fountainhead Press, titled Survive & Thrive: Start with the Heart.

The poem knits together strange, tangentially related things, as poems do. There’s my brother on his little Honda street bike. There’s the motorcycle–riding poet who set me on the path to poetry (who must have seen the admiring crush I had on him). There are Harley briefs, which a friend used to wear when riding her Harley. And there’s a random stranger. But let the poem tell its story:

For days, you hear him coming, full throttle,
visor down.

And you make excuses, anything
to get yourself out: your phone
won’t ring, the dishes won’t rinse clean,
your books change places
on the shelf.

He could be anyone:
your brother drunk at seventeen—
he drove like hell
one night to scare hell out of you, then laughed
when you almost fell off—
or the man you used to dream about,
poet and priest. You wanted
the view from that sloping
seat.

But this one
is another woman’s grief, impalpable
in Harley briefs, throttle up
and visor down, a blur beneath the streetlights, cocksure,
uncalculated, dead in your yard
for the rest of your life.

In real life, of course, there was no phone in my apartment to ring, nor was my brother drunk when he gave me a rather wild ride home from my high-school era waitress job—but that’s neither here nor there in the world of poetry. Poems reveal truth, not facts. Once the dreadful thing happened on North Pleasant Street, I never felt uneasy in the apartment again, but I still think about that motorcyclist, who collided with a car and ended his life in our yard. His name was Roy.

In reflecting on Mummu and her booties, I’m not talking about that sort of immediate gut feeling I had on North Pleasant, but rather, about the awareness over time that I spoke of at this post’s beginning—a gradual realization of how life will play out. In my case, signs have been evident in my dreams.

The semester I began my graduate work, I was newly single, which seemed both a weight, as I worked through the emotions of a failed marriage, and a wide-open door. I had always thought that I’d have a family by then. But, I thought, there’s time—a pretty consuming thought over that semester. Then, before the semester ended, I had a stunning dream in which a brusque and abrasive military woman sucked the air out of that idea. She saw a different path.“Do you want the job,” she demanded, “or don’t you?”

I’ve felt the force of that dream ever since.

For you to know more about that mysterious job—for you to meet that formidable lady—I’ll send you to the poem I wrote about the dream. Titled “Nightshade,”it appeared this fall, with two other poems, in the literary journal Ascent. But before I give you the link, here’s what I would say in introduction if I were reading the poem to an audience:

“Nightshade” records my dream in intricate detail. Dreams are made for poetry. They are poetry, delivered effortlessly—they knit together strange, tangentially related things and reveal truth, not facts. But dreaming and writing are different things. I struggled writing “Nightshade” and worked on it over decades. A dream is hard to write about without its seeming clichéd or too easy. What I had to work hardest at, writing “Nightshade,” was the poem’s opening, the literary device that would serve as vehicle for the dream.

“Nightshade” is in the voice of a fictional woman who enters into an altered state after dropping a tincture of nightshade, also known as belladonna, into her eyes. Women used to do that, during the Medieval Period and Renaissance, dilating their eyes to be seductively beautiful. Interestingly, belladonna is used today when eyes are dilated at the eye doctor’s. I am dismayed that medieval women went to such lengths—but I also identify. What lengths do women go to still, to be beautiful?

I wasn’t done with strange dreams. Sometime between that first dream and when I met the man I’ve been married to for going-on-thirty years, I had another powerful dream. I recorded its strange, symbolic images in the following poem, which I’ve tinkered with repeatedly, to find this final form. There’s no fictional narrator here. Something inside me, aligned with something outside me, was seeing a future much different from the one I’d always envisioned for myself.

Each month, the small
moon you ride moves to eclipse, waters
run red, I feel tremors.
The planet’s end plays again
and again in the cathedral
of the womb. I light a candle, a Protestant
come home, sense more than see
the high ceiling. A pungent
incense breathes me in, deeper than
the dead, deep perhaps

as dream. You
come to me then, as I sleep—
a boy child, you hold fiercely
to me. I feel the pressure of your sturdy
cage against my ribs,
your hair damp
beneath my chin, and I put you
down, saying,
I wish that I could
keep you.

The thinnest
curve of moon suspends
the cathedral dome, a diamond poised
in its cup; under
this sign, Boy Child, you melt
to the thinnest of snakes
and cut a swath across a briny
pond—just below the surface,
until you step out
on the far bank transformed
into your twin, step naked into her
from the water.
Daughter or son, neither
looks back.

So strange, the dream of you,
and yet no stranger than the archaic, fishy
creature that once actually rose
from the bottom of a mountain lake
as the landscape went over
to shadow. And how it watched me,
as I sat alone on a shore of stone,
something unspoken passing
between us, its tail a gentle blur, until
it finally undulated down,
out of sight, back into the cavern
it called home—a fish more ancient
than snow, hidden,
impossible.

I’ve had to conclude that what happens in dreams isn’t any stranger than what happens in life. My dream children didn’t look back—but a primitive fish made sustained and startling eye contact with me from the waters of a real-world mountain lake.

Mummu’s booties are in the linen closet, unused. By the time my husband and I decided not to take extraordinary measures to have the children we’d wanted, we accepted it as the right decision. I’ve come to see life’s regrets as a source of wisdom. I can’t say with certainty where those two unforgettable dreams came from. But they prepared me for the childless life I have. Yes, the adolescent girl who used to dream over Mummu’s booties is still part of me. I’ll see her standing next to me at the linen closet. Is she disappointed, seeing that box with the booties? Yes, I think she is, but she lives calmly, kindly, with the other part of me.

That part, the adult woman, sees truth in intuition and dreams, and she accepts what can’t be changed for what it is. Her regrets are minor, in the balance, a base for constantly evolving hopes. Mummu later knitted for me a tinier, pink pair of booties for a newborn baby. That pair I gave to my sister when her daughter was born—but the green booties I’m keeping. I’ll pass them on to a family member some day. But for now, they’re mine.

I’m pretty sure I don’t have to tell you why. Sometimes, you just know.