Sometimes, a Chicken: On the Path to Magic 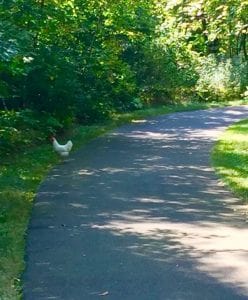 On the Path to Magic

I’m drawn to white animals. Over breakfast last Tuesday, I found myself thinking about the white creatures that have been part of my life. My heart warms when I think of them, a mix of love and gratitude. Some have been pets. I chose them—two white cats, and two white dogs. Other have showed up mysteriously and opened a path to magic.

I thought particularly, that fine morning, of those creatures—first, of my pelicans. I’ve written in this blog about a flock of white pelicans that circled almost within arm’s reach above my head, not at a beach, not in some wildlife park, but in my landlocked yard in a forest of Norway pine. The pelicans’ eyes locked onto mine—their voices rippled, dropping odd, mysterious syllables around me. Those birds inspired my novel, A Notion of Pelicans, and I even put them into the book as part of a character’s life story. What Lavinia Hansen sees, I saw. Lavinia is so moved by her encounter with the birds that she founds a church on that spot.

I thought, too, of my first mysterious encounter with a white animal. It was a horse, which crossed my path when I was twenty. This happened in winter, at night, when I was alone, driving a back road in Wisconsin. I should say I was alone in my vehicle. There were other vehicles driving that road with me. It was snowing, hard, which made my being there at all foolish. I could barely see. Then the horse appeared, and I’ve been thinking about it ever since.

The present action of my novel is made up—there is no such town, and the events of the book never happened. The characters are fictional, too. But here and there, they live out pretty closely what I’ve seen, and they learn what I’ve learned. When I wrote the book, I put my encounter with the white horse into it, fictionalized, but still in exact detail. That story belongs to Claire, the youngest narrator who is newly divorced from Paul and who has one eye on the beyond.

But here’s the excerpt. Let Claire tell you what she sees:

The first year Paul and I were together, I drove home one night by myself to spend a weekend with my folks. It was two-lane roads, and I hit bad weather. Snow was the last thing I’d expected—the forecast had promised two days of nothing. Well, here was nothing, falling hard and heavy through the beams of my headlights. I had to keep the low beams on, to see at all, and my muscles were seized up from behind my ears to the base of my tailbone.

The farther I went, the deeper it got. Soon, a veil of snow blurred the line between the highway and the ditch, and there wasn’t a plow in sight. I was locked in, four slots back in a line of cars that extended a ways behind me.

I was already half loopy from staring so hard—from steering so hard, to keep the tires in the ruts—when into the left headlight’s cone of illumination came a white horse at full gallop. My jaw dropped. Time bumped into itself. The horse was velvet and ethereal in the heavy snow. It seemed to have wings. It flew though the moving line of traffic between me and the car ahead of me—its legs parallel to the ground, its blink-of-an-eye outline tinged taillight red.

Just as suddenly, it was gone.

I drove the next miles in a stupor, the only sound the squeak of my wiper blades. In the pit of my stomach, I felt touched, brushed by something I didn’t understand. I noticed I had wrapped my gloved hands fiercely tight around the wheel and was still holding them that way. Not one of the drivers traveling with me braked or slowed down. Not one who had seen what I’d seen stopped to flag the others down, to say, “What did you make of that?” No. We all just drove. The farther we went, the more the wipers collected ice and the louder they got.

I felt, in my encounter with the white horse, what Claire feels. My first thought as the horse flew past, mere feet from my front bumper, was of Pegasus, the winged horse of Greek mythology, who is associated with artistic inspiration. I felt touched, invited to the life in art I was hoping for. To this day, I wonder what the drivers around me thought. Where many would see merely a white horse in a snowstorm, I saw a path opened between this dimension and some other, and I’m thankful to my bones for it, for the possibilities that became mine that night.

The trouble with experiences like that is they change you to your core, and then they end. You forget. Life becomes mundane. After breakfast on Tuesday, I went to yoga, and after yoga I went to my mom’s. She has an apartment in a senior living facility nestled into the woods. Near the entrance to Mom’s building is a paved path through the woods that goes nowhere—it loops back onto the campus, which is a safe, pretty, predictable place.

But walking up to the building that day, I couldn’t believe my eyes.

Toward me, down the paved path, ambled a white chicken. The sight of it, so leisurely strolling along, was confounding. There are no farms nearby—there was no way for the chicken to be on that path without a long walk through deadfall-snarled woods. But given my thought process earlier that fine morning, over breakfast—that bout of gratitude for white animals—the chicken was breathtakingly predictable. It made magical sense. I laughed, and then danced around the chicken, taking photographs. It didn’t seem to mind.

We fall into routine, a mostly agreeable dullness. But sometimes, a chicken will stroll down the path and remind us there’s magic. Maybe the magic is real, and we’re its mostly insensible, lucky beneficiaries—or maybe we create the magic by seeing it. For me, either explanation is fine. I choose magic, however it comes.