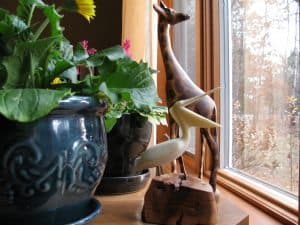 The Inner Circle. These two know all the twists in A Notion of Pelicans, but they’re not telling.

The day after my novel was released, I was sitting at my desk, leafing through its pages. Just holding the book gave me pleasure. There’s the simple fact of it—A Notion of Pelicans, now a thing apart from me—and there’s the book itself, its cover and pages. The cover is soft, sensuous, from how it feels in the hand to how it engages the eye. I opened the vanilla colored pages that day with what has always felt to me like holy purpose. My book launch was coming up in a week, and I’d be doing my first public reading from the book. I needed to decide what I would read and talk about and why.

As I paged through the chapters, all set around Pelican Church, I came up hard against the realization that had been, until then, hovering at the edge of conscious thought. This was a novel—not a poem, not an essay. My experience with readings to that point had been with those genres. I could read a poem from start to finish. I could even do that with a shorter essay. In either case, there had been no need to worry about giving the punch line away, so to speak. I’d never had to be concerned about giving plot away, or ruining my twists.

But this was different.

I would have loved to read a story that Claire, the youngest of the narrators, tells, unfolding a traumatic event from her days as a schoolgirl. But I couldn’t. I thought about reading the scene where Toni, the sociology professor, reveals a secret she’s kept since her undergraduate days at the University of Wisconsin, Madison. Her friend Rena, who is married to the pastor of Pelican Church, was Toni’s college roommate, and in recalling that incident from her perspective, she says about Toni, “There was something different about her after that.” I couldn’t read that story, either. To read either would do damage to a reader’s initial experience with the book.

I was skimming, thinking hard, looking for excerpts that would be interesting in isolation, and isolated enough to preserve what needed to be hidden. So there I was, now in Rena’s chapter, reading along as she describes those UW undergraduate years as she knew them, when something she says pierced my brain: “There were ice cream runs to Bascom Hall . . .”

My mind halted. Backed up.

Bascom Hall? No. I’d spent three years at the UW. Bascom Hall is an administrative building. I was seized with disbelief. Staring into my own book, the book I must have read a thousand times over the years of its creation, I was face to face with some sort of error. Right there, on page 45—an “erratum,” from “errare,” a Latin verb I’d learned to conjugate in high school, meaning to err, to wander or go astray. Mistakes in published works are so bad that they even have a special name. I felt my blood turn to sludge.

You may have just concluded that I’m a perfectionist—and you would be right. Errata and I have no use for each other. At one point in working on the book, I’d had the proverbial “bird” when I realized that I had Rena and Toni reading Our Bodies, Ourselves before the book had been published. I fixed that mistake, lickety-split.

The fact that I was staring at an uncaught error in my just-released book filled me with horror, and an acute sense of irony. I’d found what I knew had to be a mistake only after it was too late to correct it—and to pile irony upon irony, I didn’t even know what the mistake was.

Bascom Hall wasn’t right. But I didn’t know what was right. The UW is famous for its ice cream. Anyone familiar with the U who reads my novel will see the error immediately, because the ice cream parlor Rena is describing is a campus destination—everybody who went to school at Madison when I did, made regular pilgrimages to it. I expect its current students still do. No matter how I tried to remember the name of that building, I could not. I finally had to go online to the UW website, to bring the name back. What Rena had meant, what I had meant, was Babcock Hall—Babcock, not Bascom.

I was home alone when I discovered my mistake, and I stewed in my misery until my husband came home. I’m a realist, though, as well as a perfectionist, and already the pain was lessening. The mistake was starting to feel like the first ding in a new car. Bruce is a writer, no less a perfectionist than I. He commiserated, he comforted. We both saw at once that the mistake in the book illustrates Truth with a capital T. I’d written the first draft of the novel nearly twenty years after I left the UW, and I had already lost that piece of my Madison experience. Rena misspeaks, just like we all do as time passes and memory fades.

I recently told the story of discovering my mistake when I did a reading at our local public library. I said I was undecided about whether to correct the error in future printings, in the interest of factuality, or to let it stand as illustration of human aging and the limitations of our own memories. A woman there raised her hand excitedly and told the rest of us that Ojibwe bead artists purposely put a mistake into their work, to practice humility and to reflect human imperfection. All of us agreed it’s a practice we like.

While I didn’t put the mistake into my book on purpose, I have decided I will not change it. The overriding motif of A Notion of Pelicans is that we humans are a mix, noble and flawed, heroic and pathetic, most of us attempting to live with integrity. Rena and I made the mistake of memory together. It’s real, and I’ll keep it.