When Only Poetry Will Do: Light in the Dark Season 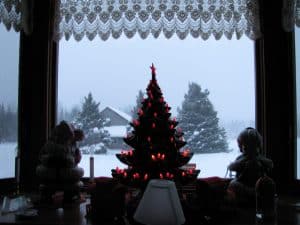 I’m feeling the need for poetry lately. This week is the most poignant week of my year—mid-December, the dark season, with long nights and two anniversaries of loss. During this week, in different years, I lost my grandmother and my father. Each year as those anniversaries approach, I feel a growing quiet inside—it’s heart-centered, gentle, like a shadow half glimpsed. For years I didn’t understand what was at the root of my December mood, but now I do. And that’s when only poetry will do.

If you follow my blog, you’ve gathered that I love poetry. Writing a poem preserves moments, like a photographic image. It records feelings so you can return to them, again, and again. There’s joy for me in remembering the full breadth of what I’ve felt in life, both the bright and the miserable. There’s light in preserving those feelings with language.

Today is the anniversary of Mummu’s passing. That’s what we called my grandmother. As the fifth anniversary of her death approached, my mother called and asked me to write a poem of memoriam to publish in the local newspaper. I set to it at once, because she needed to meet a deadline. The writing was excruciating! I was allowed five lines to convey what Mummu had meant to me, to capture what she’d meant to our family—as if it were possible.

Writing that newspaper poem opened a floodgate. I had just turned thirty, was living on the East Coast, and worked at a college. Through a program for support staff, I was taking a poetry workshop, alongside traditional-aged students. Our professor was teaching us to write in traditional forms, and just then he assigned a sestina, an old French form: 39 lines, in six stanzas of six lines, with a seventh stanza of three lines. And the best part: you have to choose six words that will repeat in a prescribed and ever-changing pattern at the ends of lines—all six words appearing in the seventh stanza, two per line.

I lost a Saturday writing my sestina, pouring my heart onto paper, from morning to night. The poem was for Mummu, of course. By the end, I was lying on the floor, drafts and notes spread around me—I’d forgotten to eat, had put off bathroom breaks until it was dire. When my husband finally pried me up off the floor and dragged me out for a walk and dinner, I stumbled down the street in a daze. We met some friends, and I could hardly come back to the world enough to speak.

The poem I wrote that day closes this post, to remember Mummu. Not long after I’d written the sestina, it was published in Primavera, a Chicago literary journal. The editors changed it, breaking the form. I agreed to it because I wanted to have the poem in print, but I have never changed it. I never will.

Poems start out as one thing—in this case, as a love poem to my grandmother—and end somewhere else. By the final draft, my sestina was about both my grandmother and my marriage. The two were linked in my mind—would Mummu, who’d lived such a different life, understand mine? If you’ve read my novel, A Notion of Pelicans, I don’t have to tell you that one of my obsessions as a writer is the changing nature of intimate love. Mummu’s sestina was written as my first husband and I were coming to see that there was an end approaching for us. The poem was the first time I wrote that truth down.

The end of a marriage is a complicated time, sad and confusing. Doors close, and doors open. The emotions of it are acute. I have never known more strongly that I was alive, breathing, hurting, growing alive, than I did during our sad last year. There’s a beauty that comes with loss—heart-centered, gentle, like a shadow half glimpsed. Poetry is a paean to that beauty, a sort of hymn.

Sometimes, only poetry will do:

Do You See, Mummu?
for my grandmother

When, in the kitchen, you pressed the smooth skin of your face
against me, I didn’t see that your bed
would be empty by Christmas. If I had, I’d have touched
you one more time. Mummu, why didn’t you tell me, if you knew,
as I think you did (that way you held my hand),
that you were hearing the last words of the song,

that I soon would be singing
without you? The day I wed, there was a girl in your face,
grown old with some knowing. She took the ring from her hand
and gave it to me to wear, not to bless my bed
or my wandering, but so I would always know
the feel of it. And though you are dust, its touch

lingers. I see you at the stove, the way you touched
the match to its black face and made the firebox sing
and my skin tingle. There is some knowledge
that fire brings, Mummu; so we turn our faces
into it—a god we can see. We seek it even in our beds
of brass and sadness, only to find firsthand

it never keeps us. But the hands
keep trying, Mummu, happy for the simple touch
of a peony against the skin. I remember you in the flower bed,
your hands digging and singing.
I remember the soil, that dark face
of the earth. It is a poem I know

by heart—one that, as a child, I didn’t know
you were writing into me. My hands, your hands.
My face, your face.
And though I never saw you touch
your Väinö, except to tousle his hair, lying here now singing
and running my hand along the cool brass of your bed,

I know the curtains breathless at the bedside
window used to breathe in over the two of you—and I know
that, sometimes, you too were songless.
So I turn and cup my hands
around the face of the man I love, thankful that touch
never ages, that love’s changing is not so hard to face

here, in the bed where you gave birth to my mother, where your hands
knew her first skin. Do you see he touches
me too, Mummu—that a songbird wakens into the evening’s face?