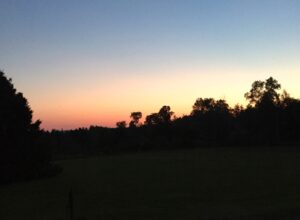 I’ve been getting up before dawn for years. I took the photo at the top of this post back home, in Michigan, as the sun was rising. It was a couple mornings before my mother sold the house to move to a senior living community, and I wanted to remember every last moment there.

I’m a senor citizen myself now. My middle school years were of a different time. The kids in our small but crowded neighborhood spent every free moment outside. While our fathers and mothers were both strong influences in the raising of my generation, it’s a story of our mothers that I’m telling today. Our dads worked. Our mothers were at home. I’ve written before about what it was like growing up in that neighborhood—about the ethnic diversity there and how it taught me to be generally hopeful for humanity’s future (“That Comforting Front Door, Those Sheltering Windows”). If you’re feeling in need of encouragement just now, in the department of hope, you might take a look at the link.

As I drove this morning, the particular memory that surfaced was of a day when my younger brother got into a tussle with some other kid. A neighbor woman, younger than my mom by a decade, appeared on her porch and reprimanded my brother. I’d seen the tussle up close and knew he wasn’t solely at fault, so I leaped in to defend him.

Sticking my nose in, as I did—using the tone I used—did not endear me to the neighbor woman. Things spiraled. The way it ended, I gave her some lip and stuck my tongue out at her.

It feels good, to do that sort of thing. It feels righteous. But oh man, the righteousness is ephemeral. Do it, and then there’s your mother to deal with—and all your wounded indignation doesn’t matter. I got home to find my mom waiting. Even her expression asked where I’d been. She already knew, of course. The neighbor had called, and my mother was not happy with me.

I told her I wasn’t totally in the wrong. I told her my brother wasn’t, either.

“I understand that,” she answered. “But you were disrespectful, so we’re going back, and you will apologize.”

She hooked me by the elbow and steered me there at a march. When we arrived, and the neighbor lady answered the door, they both turned to me, and my mom said, “Well?”

“I’m . . . sorry,” I choked out. Tears were threatening. It was hard—to say it, to look into my neighbor’s eyes. That moment changed everything. My attitude, and my life. Our neighbor accepted my apology. All was forgiven, forgotten. I eventually even became her babysitter.

Social skills don’t come naturally. My mother’s response to what I’d done brought sharply home to me that there are social norms for interactions between individuals—an understanding about how people should treat one another. The same is true for relationships between nations. Well-adjusted adults—and countries led by them—honor that understanding, they respect differences in life experience, and they ignore the impulse and don’t stick their tongue out.

This quiet morning, our country is in a hard place. Those on the extreme left and right politically are working for change, their visions opposite and too often near-sighted. Not all of us inhabit the political extremes, of course. There are many like me, in the broad political middle. It’s hard to imagine unity these days. Some of our leaders find it convenient to pit us against one another, and it becomes harder and harder to even imagine the compromise we need. That, I think, is why on the drive this morning, I remembered poking my tongue out at my neighbor. I saw it like a bolt from the blue-orange sky that this nation needs a mother, to march us toward a change of behavior.

The idea’s simplicity crystallized as I drove, and it brought up thoughts of our President. What other official could fill that role? Maybe you like President Trump. Maybe you can’t stand the thought of him. It doesn’t matter. What matters is, he’s not a person who can do for the country what my mother did for me—bring about an attitude shift. Even if he has a Road to Damascus experience and becomes the most selfless, even-handed president in history, it’s too late. He’s already forfeited trust. There’s simply too much chaos, too much sorrow.

When I got home with the groceries, the mist was lifting, and I sat down to write this. The election is coming up—in many states, early voting has begun. This is our time to come together and set things right. What matters is the country, not political parties and not individual leaders. Parties and leaders are ephemeral—they come and go. It’s the country’s unity and integrity that matter.

Many feel that the United States, despite our continuing struggle to achieve true equality, has a God-given destiny to lead for the good of humanity. As a writer, I’m drawn to wisdom set down in print. When I think of our place in the world, I think of these words from the King James Bible: For unto whomsoever much is given, of him shall be much required (Luke 12:48). If you see, as I do, our country’s blessings as requiring us to work for the good of others, I ask you this: how are we able now, in our state of disarray, to do good in this world? What shining, if imperfect, example can we be, without cooperation and compromise inside our own borders?

One needn’t be Christian, or even religious, to understand the advantages we’ve had as a country, and to see the moral imperatives that come with them. Setting things right nationally and globally will be a long process, involving discussion and negotiation that will go on long after you and I will have passed from this world. New generations bring new ideas and changing circumstances. The need for compromise is built in. It’s like the tide, eternal—eternal and God-given, I’d say.

To fix the problems we face, we need to use our individual talents and passions in service to our country and to one another. My heart’s passion is to shape ideas by ordering words on a page, words to be seen visually and to be heard with the mind’s ear. It’s why I sit down occasionally, here in our quiet town, and organize my thoughts in pieces like this. It’s why I share those thoughts, even though I understand that there’s something presumptuous about doing it. We walk a fine line, living in community, between serving others and serving ourselves.

An important thing we can all do, whatever our passions and gifts, is to vote. The national change in attitude that we need will have to start with our leadership. As you vote this fall, please find it in yourself to be hopeful. Vote for those who have shown evidence that they will govern for all of us, fairly and equally and with wisdom. Vote to preserve our democratic system. Consider down to the marrow of your bones how important it is to elect a President who won’t stick his tongue out, at anyone. It’s what children do, out of ignorance and weakness.

I was lucky, that day I stuck mine out. Almost before I could turn around, I was taught better by my mother and my neighbor, two wise women, working together.