My Grandmother’s Hair: On Writing, Hauntings, and Love 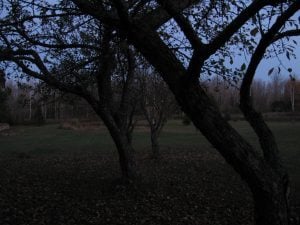 The orchard, where the little girl in “Something Stood” appears

What do you think about, when you think of your grandparents? When I think about mine, I remember the hours that I spent following them around their rock-strewn farms. Those were idyllic hours, and the memory of them is a hedge against the harsher realities of this world. When I think of my father’s mother, in particular, I think of her hair. It was long and dark, streaked with gray, and had never been cut. The year I was in first grade, my family lived with my dad’s parents. Night after night, I sat beside my grandmother on her bed as she took her hair down out of a bun and brushed it. What she did next in her nightly ritual, I’ve never forgotten. She would carefully pull any loosened strands out of her brush and wrap them around a large ball of her hair that sat on her dresser.

That ball of hair haunted me. I would slip into my grandparents’ room and examine it. The ball was the size of a grapefruit, dry and cool in my hands. My grandparents passed from this life long ago, and there are things I wish I could ask them: why Grandma had saved her hair, for one. Maybe it was practical, to later spread it around the garden as protection from wildlife—between woodchucks and deer, the garden was constantly besieged. Maybe it was nostalgic or symbolic, imbued with secret meaning, or maybe it was generational. I have since seen Victorian era jewelry and art fashioned in memoriam from human hair. Or maybe it was behavioral eccentricity. I’ve written about my own hair-related angst, so I don’t wonder that my grandmother may have had similar anxieties about hers.

You might be wondering what this has to do with writing. It has everything to do with it, in an idiosyncratically logical way. It’s about those things that drive a writer to try to make sense of them. My grandmother’s ball of hair shook and puzzled me—it still puzzles me. It’s emblematic of the many things in my life that have shaken me and that I’m still trying to make sense of.

My writerly insecurity is a simmering pot that occasionally boils over. My genre of choice in my twenties was poetry, but at one point I actually stopped writing poems. I was distressed that I kept writing love poems, poems about relationship. I was obsessed by love, much as I’d been obsessed by that ball of my grandmother’s hair. I wondered suddenly if I should apologize for subjecting the world to my serialized monologue on love. Since I’m talking about poems, which few read, it wasn’t a big world—my friends, my family, my classmates and teachers in the various creative writing classes I took. It wasn’t that I suddenly thought love an unworthy subject, but that I had become acutely aware that I was writing nothing else.

It bears repeating: I was in my twenties. Everything was about romantic love, about finding it, keeping it. I eventually got over my anxieties about proper subjects for poetry and started writing poems again. And guess what? They were still love poems. Even poems that were on the surface not about love were love poems. I’m not talking now about romantic love, but love sprung from empathy—and every poem was rooted in a haunting.

For example, this poem, which I wrote long ago and finally saw in print in the Lake Region Review a couple years ago:

I had forgotten her name,
but when I saw the house where
she played, I thought of November,
of the way the place looked then:
quiet, and sturdy, and brown,
simple as the cordwood split
and stacked along the road.
The leaves blew about that year
as they never have again—
since she, distant and deerlike
on her sled, was shot on Nurmikko
Road by a disconsolate man.

The tone of things changed some
after that. For weeks, a fear
unlike any we’d known before
turned our eyes to the tree line.
It kept our voices low.
Wherever we looked, we thought
we saw her. Something stood
alone all night in the orchard.
When we went out to the barn,
the old Holsteins stared
larger-eyed in their stalls
and kicked at the ghost of a hand.

This poem is autobiographical. When my siblings and I were kids, a little girl who lived not far from our mother’s parents was shot and killed by a hunter. She had been out sledding. Something did change when she died. We learned fear. The safe world we’d known had disappeared.

The poem is like my grandmother’s ball of hair. If you slip into the poem’s room and tease apart its strands, you will find one of my hauntings, something I’ve returned to in my writing again and again, writing love poems around it. Only, nowadays, the poems have expanded into prose, and I don’t apologize for writing about love anymore. The little girl from the poem shows up in my play The Rock Farm, which recounts an evening in the life of a family living in Michigan’s Upper Peninsula, where I grew up. One of the sisters, Sarah, is a poet, and her backstory includes the memory of a little girl who had been shot and killed while sledding. I gave my personal story to Sarah. She is haunted by the memory of that girl, as I am haunted by mine.

I am haunted, as well, by the widow lady who lived across the street after we’d moved to town. She loved that I wanted to be a writer and, as I moved into my adolescent years, encouraged me in it. One of the last times I saw her, she gave me a novel, The Captive Witch, that had belonged to her late husband. I still have it. That kind and lovely woman went to visit a friend one evening and never came back. She, too, was shot and killed, collateral damage in a romance rumored to have gone bad, a tragic case of being in the wrong place at the wrong time. Her house sat dark and shuttered for months. Ask me how haunting that was.

Guns are a part of my family. Hunting has been, and for many of us still is, a facet of life. I understand the careful and respectful use of guns. But I’m haunted by the terrible ways they are used. One of the narrators in my novel, A Notion of Pelicans, is haunted by guns. Claire’s fear links to my own hauntings, of course—over the death of the little girl on her sled, the death of my neighbor. There’s an image wound powerfully into my memory: it’s of the local newspaper, lying on the floor next to the kitchen table after our neighbor was killed. She was one of seven or so who died or were injured in that shooting. The page was emblazoned with their photographs. The image haunts me. How does one make sense of that? The shooting left our community reeling. For the first time, my family began locking our doors. I would check them every night before I went to bed, would see the darkened house across the street. It was inevitable that, when I wrote a novel, I would put into it a veiled love poem to that vanished neighbor—the story of Claire.

The speaker in this little poem, “Something Stood,” says, “Something stood / alone all night in the orchard.” It’s the imagined ghost of the sled-riding girl, but it’s also the spirit of my lost neighbor, who, through a trick of the mind, joins the little girl and stands there beneath the apple trees. I’m haunted by them—their memories deserve love poems. Writing love poems is my ritual, a preserving and arranging of strands. I will keep writing them, night after night, year after year.