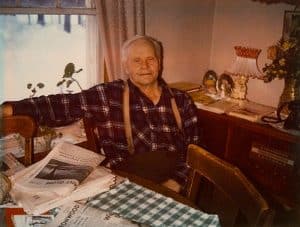 Grandpa never moved away from his farm. To the end of his days, at age 99, he kept a garden and split and stacked his own wood for heating and cooking. He always had a dog. The one I most remember—I was around six—had a love for chasing cars, and when it didn’t come home one day, Grandpa and my younger brother and I walked down the road, calling for it. Grandpa could see into the weed-obscured ditch, and he suddenly ordered my brother and me back to the house. There was no translation necessary, and no please about it. The dog had come to an end that Grandpa didn’t want us to see. I didn’t have to. I knew, and I ran back to the house.

I have a graduate degree. I’ve spent my life crafting words. But the fact is, I am most who I am because I grew up around that farm. Woods and rocks, fields and critters show up again and again in what I write. My grandparents had cows, which I learned to milk, and hens, whose eggs I learned to carefully gather from beneath them. I had my first cup of coffee at that table—I was, I think, in middle school, and the brew was mostly milk, almost right from the cow.

I would sit at that table and watch in amazement as Grandpa shoveled multiple spoons of sugar into his coffee from the sugar bowl—which was somehow always hard and crusty when you put the spoon in—and then followed with a shot of salt! It sounds terrible, even now. But he did live to be 99. When I told my brother one year younger that I was writing about grandpa Gust, he said that Grandpa had always seemed to him like an icon. Yes, I thought. Not sharing language had kept us from fully knowing him. How I would like now to sit at our grandfather’s table and set that right.

Not too many years back, my father shared with me more of the details of Grandpa’s history. Finland and his farm in Wisconsin were only two of the settings in which he’d lived. He worked in the woods of New England and in manufacturing in Massachusetts, and then moved to a Finnish community in North Dakota for fall harvest. He eventually moved to Duluth, Minnesota, where he dug sewers and bricked streets. That small fact blew my mind open.

I had been to Duluth countless times—and never realized that the infrastructure of that town has my grandfather’s fingerprints on it. When Grandpa later moved to the area where I was born, he worked for a while as a laborer. He bricked the main street of Bessemer, a little town named for the Bessemer system of processing iron ore. Every year, thousands of people celebrate the Fourth of July standing along Bessemer’s streets, unaware that they’re standing on my grandfather’s sweat. On many grandfathers’ sweat.

Somewhere along the way, my grandpa Gust attended Suomi College, which was founded by Finns in the Upper Peninsula of Michigan, but he didn’t find college to his liking. Once he’d settled in our home area, he worked a surface job at one of the iron mines, and he eventually bought his farm. Milk from his and Grandma’s cows went to the country store—cream, they sent to the creamery. In winter, Grandpa worked in the logging camps, while my grandmother took care of the farm animals.

My grandpa Gust’s story is small and might seem unimportant, but his reach was wide. In unknown places around this country, there are things made of the iron he helped send into the world—there are things made from the wood of the trees he felled and hauled. It’s the story of this country. Every brick and street, every pane of glass, was put into place by someone, and many of those “someones” were, and continue to be, immigrants.

On both sides of my family, my grandparents’ children, grandchildren, and great-grandchildren have chosen their life partners from among the children of other immigrant groups. In making our choices, we’ve crossed ethnic, religious, and racial lines and have flourished. I don’t need books (much as I love them) or talking heads to tell me that the families that joined together are all culturally richer for it.

There were two occasions when I saw my grandpa Gust with more complexity. The first was after I’d left home, when my aunt told me something that has continued to haunt me: every morning, Grandpa would sit in that chair at his table and listen to the daily death notices on the radio. He would sit and weep, as people younger and younger than he kept passing on. He’d say that everyone he’d known was gone.

The second time I saw him more fully happened around that same time, when my dad and I went to visit him. We sat at that still crowded table, and Grandpa showed me a letter he’d received. I could see how deeply it mattered to him, and when I got home, I wrote this poem. It’s a small poem, but it captures my grandpa Gust and his quiet way.

On his ninety-second birthday
he received a letter from the U.S. president
saying, congratulations—you are one
of the oldest living Americans.
He smiled and said something about foolishness
in Finnish,
then put the letter on the top shelf
of his dish cabinet,
where he points it out to every visitor.

When the immigrant generation in my family added “American” to their identity, it was important to them beyond expression. The immigrants who raised me were openly thankful for the life America gave them. My life is an extension of theirs, and I see it as my obligation to pass to others the benefits that have been mine—either making room for the stranger, personally and collectively through humane immigration policy, or doing what I can to bring about broader policies that make life better for people wherever they live, in whatever country.

Growing up in the tight circle around grandpa Gust’s table, his grandchildren were given hearts for the natural world, heads attuned to human need, and limbs drawn to the shepherding and care of every creature, even a lost dog in the ditch. Words, it turns out, weren’t necessary. All we had to do was use our eyes.