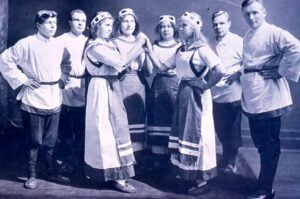 I was lying in bed this morning, still dark out, lying there thinking about this essay, a draft of which was waiting on my desk—and I was ready to throw it into the trash, despairing over how hard Finnish is to pronounce. That sort of existential despair is common in a writer—at least, this writer—especially trying to craft a reasonable first draft. Structure a story around a foreign word impossible to pronounce—and you’ve built a repetitive clunk into something you want to flow past the ear.

Everything seems bleaker in the dark. I got up, brewed some coffee, fed the dog. Then I sat down at my desk, just another day—writerly angst abated.

Did you know that J.R.R. Tolkien used Finnish as the model for the language his elves speak in the Ring books? Listen to the elves, and you’ll cue your ear for Finnish. The first rule is this—the stress in a word is always on the first syllable. That makes for a melodic language, as those stressed first syllables start to add up and create a lovely rhythm. Then there are the letters themselves. That “a” with the dots over it is a short vowel—rhymes with “pan.” Put an “i” next to it, as in “äiti,” and—oh man! The closest I can come to letting you hear it is to say that the phrase rhymes with “KNEE-sand EYE-tee.” Not quite right, but close.

When I first set out on my search for Isän Äiti, a week or so ago, I went to a large three-ring binder in my bottom desk drawer. It bulges with every poem I’ve written, from the small to the ambitious. I pulled the one titled “Isän Äiti,” written in the summer of 1985. It’s a rather small poem. I stared at it a while, left it on the desk, sat with it in my mind. I could feel the poem, eager to grow, standing at my shoulder as I diced carrots or peeled potatoes. It rustled behind me at the sink. Finally, one very early morning, I sat with it in literal time and space, my fingers on the keyboard. The poem morphed, rearranged—sheet after sheet of paper running through the printer, only to be marked up, and to the keyboard again. When, days later, I was done, something new was looking back. If you stay with me, you’ll find that new thing below: “Love Song, a Triptych.”

Not sure what a triptych is?

Think of an old-style church altar—three biblical images above it, painted on separate panels, a theme considered from three perspectives. If you’re still not sure, click this link. It’ll take you to the Met Museum in New York, where you’ll see and can read about the Annunciation Triptych, a trio of images centered on the visit of the angel Gabriel to the Virgin Mary, announcing her impending motherhood. The painting is beautiful to look at and interesting historically. What painters have done with triptych can also be done with poetry.

I won’t explain much about the poem before you read it. It’s based on historical fact, rooted in my family’s history. Its ideas and diction are pretty direct. But it will help you to know that my Grandma Olga immigrated into the United States on her own. She was intrepid, strong-willed in her decisions, plainspoken in her manner. Even as a child, I could see that.

There was something unusual
about the way
Isän Äiti walked—

one of her hips rode slightly higher

than the other, a sort of jarring
rotation, set in motion

one evening, during milking,
by the kick
of an ill-tempered cow.

In Finland, she’d danced on a stage,
wearing a crown.

In America, as
immigrant, she worked as a maid,
serving the family
of the big boss at a mine,

where Finns—
Croatians—Italians—labored together,
a mile below ground.

In her free time, she kept company
with the Finnish boys, dashing
and familiar,

until she married one,

the one, but no hurry—
age thirty was fine.

She learned to cook
from a woman who’d gone to cooking
school, an exacting boss
with unswerving opinions:

Isän Äiti carried the sound
of that voice in her head.
At her own farm-kitchen table, with its rough
plastic tablecloth,

she taught six-year-old me
something she’d learned from that boss—
how to crack
an egg. I have never cracked an egg

Katso, she said, look.
Then her bent, arthritic finger curled
into the shell,

catching the last, precious bit
of the white . . .
wiping it carefully
into the bowl.

In the sauna, she was mythic—

her flattened breasts
swung lamp-colored, luminous,
as she pushed my head

down
into a pail
to wash my hair.
Isän Äiti’s knuckles rooted hard

across my scalp—
her own graying, loosened hair
splayed out like memory
around her.

It didn’t matter—the way
she walked.

At night,
before bed, we would sit together,
and she’d play her lap harp,
singing

in Finnish. The notes rose high-pitched
from the ends of her fingers—
mournful, stark,

at one with the wind

in the orchard, the copper belly
hissing
in the kitchen stove.

When I wrote the 1985 version of Grandma Olga’s poem, I’d never seen the picture of her on a stage. I didn’t know she had love for performance in her—the deliberate pose, the well-timed turn or word that sets the actor’s blood racing. When I saw the photo, I heard a little ding in my brain, and I saw suddenly that she was likely where my own attraction to theatre had come from, behaviorally, genetically. I’ve acted, written dramatic scripts, and seen them performed. Poetry, my first genre, is a cloistered practice—not so, with theatre. There’s a oneness that arises in a theatrical cast that I can only call miraculous. Knowing that Grandma Olga felt that, too, brings her close.

There’s also this—there was something familiarly unfeminine about her.

In the summer, Grandpa primarily worked the fields—and Grandma Olga worked beside him, gardening, making hay, cutting wood, while also tending the livestock and doing the milking. In the winter, Grandpa worked in the lumber camps, and then Grandma took care of the farm alone. She cared for the animals in the barn and their children in the house. She cooked—she cleaned—she washed clothes and kept two wood stoves fired for heating and cooking.

To me, she was “Grandma”—wearing grandma clothes, going to church and her Kaleva women’s meetings, gathering with her matronly friends. It wasn’t until I got older that I understood how brave she had been—to board a ship as a single woman, then get on a train that would take her to the middle of a strange country. She was as strong in her spirit and mind as any man, and maybe more than some. Intrepid seems a weak word to describe what she was. Feminine seems an injustice.

I identify with that unfeminine thing in my grandmother. I have always felt boyish, from my slender, straight physique, to the way my mind works. I was taken aback when, just after I’d turned thirty, a woman I knew professionally said to me, “You are the most ladylike woman I’ve ever met.” I have to tell you—I went home and told my husband that it made me want to puke. I have never aspired to be ladylike. That gets a woman nowhere, at least nowhere I have ever wanted to go.

Through my entire adult life, I’ve wondered how much of femininity and masculinity is learned, how much is built into us genetically. There have been signposts along the way, inviting such deliberation. I came up on an especially important one in my mid-twenties, when I was taking a graduate level anthropology class. One of my classmates was a young woman studying to be a psychologist. Before class started one day, while we were sitting around the conference table, chatting, waiting for the professor, she suddenly announced that she’d been born a hermaphrodite!

We all stared—no doubt blinking in amazement.

“Yes,” she said. “I was born with both male and female sex organs.”

We sat there slack-jawed, I’m sure, as she went on to say that, when she was born, the parents of a hermaphroditic child would decide the direction of its life—whether it would be male or female. They would essentially guess, then surgery would be performed. I have never forgotten what she said next. “My parents chose female. . . . I’m not sure they chose right.”

I have thought about that classmate many times, wondering how her uncertain life turned out. I’ve thought about the great, confounding diversity that God created and creates in this world, and I have taken it as an instruction to be humble, to not try to outguess God and assume that I know all. Most of all, I’ve seen it as my notice that I must never insist—as my grandmother’s cooking-school-educated boss had—on my interpretation of the way things must be done.

I find myself grateful that I have closed the distance some in my search for Grandma Olga. Her last days are hazy for me—I know them only second-hand. My memory is that she was sitting in the porch, next to the basement door, peeling potatoes. I’d seen her do that countless times, but the last time, she collapsed. She’d had a stroke—and it tethered her to a hospital bed for her last hours. I wasn’t able to see her before she passed. Hospital policy prohibited children from visiting.

My mother reminded me recently that, on her last visit to see Grandma Olga at the hospital, Grandma kept grabbing Mom’s hand and squeezing it. She couldn’t speak, but she was trying hard to speak with her eyes. My mom thought she was imploring her to take care of Grandpa. I suspect it was more than that—at life’s end, so much remains unresolved. But yes, even from her hospital bed, Grandma Olga was taking care of things, something she’d done her whole life, something about her I’d admired.

No, I didn’t know my father’s mother well, or for long. But I knew her enough.