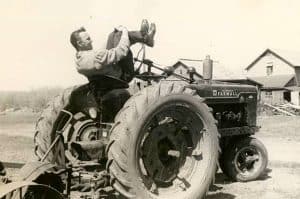 My father, Oiva, has been gone from this world for five years, and I think of him every day. When I got married, in my early twenties, my husband and I gave our parents matching wood-and-metal wall ornaments in the shape of a cross, and my folks hung theirs on the wall in their bedroom, where it stayed for nearly forty years. I took it down from its nail when Mom sold the farm after Dad passed, and she told me to take it—it was mine. Now, at the start of each day, I touch that cross and speak aloud to my dad. It’s a ritual, a sort of love song to my father. There’s something of him there, in the metal and wood: his spirit, absorbed over decades.

My father was not inclined to fancy, in fashion or thought. He was a man of the earth, raised by farmers and with a farmer’s practicality. He wasn’t religious, but spiritually curious. I think he would like my thought that we all linger after death in the physical things we owned, that his essence is in that cross of wood and metal. He literally spent his life “in” the earth. He worked as a miner, wrestling iron and copper out of the ground.

That’s my dad in the picture at the top of this post, in a free and easy pose on my grandfather’s tractor. I love the image—love that laid-back, swaggering man. The photo was taken at my maternal grandparents’ farm (which my parents eventually owned) around the time my parents married. My dad was strong, muscular, with a barrel chest and broad shoulders. His hands were huge like baseball gloves, but his touch gentle. At his memorial, more than one person got up to reaffirm a memory of a time when two of Dad’s friends from the mine stopped by.

His friends were younger, and I am sure they looked up to my father. One of them rattled and roared up the alley to our back yard on his Honda 750 motorcycle. For those of you who know bikes as little as I do, it was not a small motorcycle. The three of them started bantering, as they always did—this time, about the cycle, how powerful it was and how heavy. Dad’s friends started kidding him about whether he could lift the bike off the ground. Dad said, hell yes, he could—his friends said, no way!

I did not witness this great feat, but my younger brother, Bill, was there with some neighbor boys, and he says that Dad gathered himself, placed his hands, and proceeded to lift the bike two inches off the ground. He held it aloft for a good ten seconds, to his friends’ utter disbelief. As Bill put it, “They were screaming and yelling like it was an Olympic weightlifting competition. We were all in awe.”

Not of the bike. But in awe of Oiva.

Last week, I was talking about fathers with a group of women. We agreed that our fathers rarely used the word “love” but that their love was apparent. I think my dad demonstrated it by teaching us kids practical things, like how to milk a cow or plant seeds or make hay. When I was assigned a science project in grade school, he showed me how to take apart an electric motor and taught how me how it worked. It didn’t matter that I was a girl and inclined to write books. Today, I count myself lucky for that. I also make a point of using the word “love” freely, and often.

I have a small but deeply important memory of my dad that he didn’t know I had. My first marriage ended sadly, in divorce. I was living in Boston, and I gave my mother the news over the phone, including that I was going to take back my maiden name. Not long after, she reported back that when she’d told my father, he said simply, “I’m glad she’s taking back my name.”

Small, but important to me.

My dad lived for decades with a heart condition. As he aged and his health declined, he labored under the weight of it. The man of strength who had lifted motorcycles, the man of high spirits who kicked up his heels on that tractor, became harder and harder to see. It was a sadness for us, like all families eventually experience. Now, when I greet my father each morning, I press my fingers to the cool arms of that cross and expect that, restored and hale, he hears me. I picture him—back to lifting motorcycles, to tilling fields of unimaginable bounty.

I love the men that I love because of my strong, gentle father. I love men because of the essence I saw in him when I was a girl. There’s a poem I wrote as a woman who was living far from home. It’s about being my dad’s daughter.

It’s a love song, in recognition.

You liked to fold his work clothes
into the white sack.
They were stiff with strong detergents,
and after a hot day
in the sun, they still smelled of iron ore
and dankness.

Above his right eye were small, blue scars—
the fruit of a cave-in.
You hardly ever noticed them,
but sometimes at your window in the evening, dreaming,
you couldn’t help but see
that he was balanced on the earth’s
dark tongue.