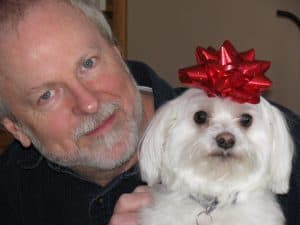 My husband, and our sweet girl dog.

I sat down at my desk this morning. 5:00 a.m. I’d fed the dog and made coffee. It was time to write. I sat . . . then I checked Facebook. I read the news online. Two hours later, I left the desk and took a shower. There’s something about the shower. Standing there, I get a clear sense of what’s going on with me. The last few days, I’ve been out of sorts—bordering on cranky. Why? Because I get that way when I write, just before I commence, when the water breaks and some epiphany is about to be born.

Since my novel came out a year ago, I’ve been doing a blog post once a month, and it was time to post another. The problem was, no one idea was jumping up to be my subject. After my shower, I found my husband, Bruce, in the kitchen, pouring a cup of coffee. I moaned, “I don’t know what to write—give me a topic.” He said, “Write about what a jerk your husband has always been.” Bruce is a writer, too, and he holds nothing back. He actually used a different word than “jerk.” I’ll let you speculate as to what it might have been.

I said, “No!” (As Bruce would likely tell you I often do, when he makes suggestions—imagine!) Then I walked away. Before I’d taken two steps, I started to think—my mind leapt to work. Now, minutes later, here I sit, with a mechanical pencil and yellow pad. I always begin drafts by hand. I’m sitting and writing this to surprise Bruce, who is my first reader. Here’s my thesis for the day:

Yes, dear—there is no perfect match.

Bruce and I have been married twenty-six years. We’d both been married before and brought wisdom to our union that we’d not had when we’d married the first time. Does that make it easier? Sort of. But let’s face it—love is hard. Partnership is harder. I’m in awe of people who’ve been together 50, 60, 70 years. I’m in my sixties and sometimes I’m bored with myself. It’s hard to imagine living with someone else that long.

Someone who reads my novel, A Notion of Pelicans, might conclude from the things that happen in it that I don’t like men. They would be wrong. I love men, love the way they’re different, how it complements what I know about myself and other women. A reader might think I don’t like marriage—a main focus of my book is how complicated a committed relationship is, and how many ways we can manage to mess it up. The reader would be wrong about that, too. I love being married. Is marriage hard? Good Lord, yes! One of the hardest, best things I’ve done.

You might be wondering why I would write a book that tempts readers to think I hate men and marriage. Because, like my husband, I don’t hold things back. In that way, we are perfectly matched. I love both men and marriage too much to pretend about them—to ignore the limitations that partners bring to their relationships, alongside the positives. The women in the book are as flawed as the men. I can say with my whole heart that I love all the characters in my book, in their messy, searching complexity. It’s like I know them—they’re part of my life.

I’ll end this post with a poem for my husband that I wrote at least ten years ago. It’s a love poem, from the perspective of late middle age, one he doesn’t know I wrote. Here in Minnesota, winters are long and cold. Bruce and I used to own a house that had a guest bedroom with a south facing window. That window flooded the bed with sunlight in the afternoons. In unending January—through bleak February—we would lie on that bed and read, soaking up the light, waiting for winter’s water to break.

Here’s the poem, to my very tall, jerk of a husband:

Let’s say we’re half-clothed on the bed,
sun-drenched, pillows stacked and strewn, a winter’s
archipelago.
Let’s say you stretch and turn, this way, that,
you throw out with that masculine edge, that bravura,
You were born to be mine.

I look up from my book.
We’re second-timers, the bloom off, long back.
I laugh. I’ve been looking up at you so long, my neck has seized.
I see a world of canopies.

The undersides of trees—that four-star, another-honeymoon hotel,
its burgundy tent billowing above the walkway—
the cool, grey awning at the bank—and who could forget
that amazing web of pearly birthday tulle you might have thought
of stringing over the bed.

I was born, yes, born to be nobody’s fool-around, part-time,
don’t-bother-me baby.
I never had to say that to you—
you were full-tilt all the way.

Still, I have seen the way your blue, blue eye
doesn’t quite meet mine,
have seen your ear, so sweetly
curved but tuned, as a man’s ear maddeningly will,
to every conversation but mine,
however insipid, or inspired.

We’re in it, we often say,
together. But just now, on this eiderdown strand
in the February sun, I have my book.
Remove your aging thigh from mine, and hand me my wine.
Here’s to our pasts, to what remains.

Stir the air, dear, if you must,
with that flourish of your hand—make the pretty
dust motes wild.