In-Laws, Outlaws, and Iowans: On What Calls Our Names 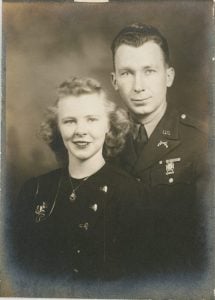 When I began working on my novel, “A Notion of Pelicans,” I was a newlywed, my husband’s roots being in Iowa. I’d had little sense of Iowa before marrying Bruce, apart from what could be seen from I-80, which I’d driven periodically when I lived out West. I wouldn’t have imagined, back then, that I would one day have in-laws from Iowa, that those unending, silent fields would take on a voice and begin to call to me. Even less could I have foreseen that a character in a book I would write—Lucy Talbot, a brusque but generous businesswoman—would owe her existence to those in-laws and that place.

My first trips to Iowa with Bruce took us through the heart of it, along back roads, which we’re both fond of driving. I was charmed by the towns we passed through—from their neat and stately town squares, to streets lined with lovely old houses with porch swings, to the occasional and hypnotic drone of cicadas. I’d never until then heard one cicada, let alone thousands at once.

My father-in-law, Harold, and mother-in-law, Ruth, are now deceased. It’s hard to express how much we miss them—their intelligence, their warm hearts and idiosyncrasies. Ruth and Harold were from the same little town in northern Iowa, which Harold, a retired sociologist, always referred to as (in a dramatic, booming voice) The Center of the Universe. Ruth was cutthroat at the bridge table, and she didn’t mind being perceived as a renegade or outlaw. She was known for being willing to take up a fight for needed justice on the political scene in their community. When Harold would start loudly singing the praises of their hometown, she would smile a long-on-patience smile—but she never disagreed.

My novel is set along the shore of Lake Superior, but I wanted its characters to have broader regional origins. The book has multiple narrators, and I wanted them to be diverse in age. Given the charms of Iowa the place, and Iowa the people—at least, those I had met—I decided to make Lucy, the oldest of the narrators, an Iowan. When I told Ruth that I was going to do that, she loved the idea. She brewed a pot of coffee and sat us down over two cups and a notepad, and began telling stories of her childhood, there in The Center of the Universe.

It was during the Great Depression. Ruth’s stories reflected the hardship of the time, but as she told them, her eyes shone. Hoboes walked the railroad tracks near their farm, which had a big circular barn that the Baby Ruth Company had rented advertising space on. Ruth said there were always Baby Ruth bars in the house then. She also said her parents would help the hoboes out, however they could. It was a strong lesson for her in social awareness and action, and it shaped the way she forever after interacted with the world. As happened to many during the Depression, her parents eventually lost the farm to the bank, and the family moved into town.

Two small things from Ruth’s childhood stood large in her memory. First, her family used to bathe in a big movable tub, taking turns in the same water. That story she told as one of privation and closeness. Second, she’d had a blue velveteen dress with a white satin tie that went almost to the floor. Ruth’s entire being glowed when she spoke of that dress, which had been long in coming and had cost her family a precious two dollars. The story of the dress was one of hope, and making-do. The character Lucy is fictional, but the factual details and moral lessons that my mother-in-law Ruth shared from her own early life, along with her civic-mindedness, went directly into Lucy’s world.

Lucy was a delight to write. I loved entering into her skin and speaking in her voice. Like my mother-in-law, Lucy is a force for good in her community, and she has few qualms about being seen as an outlaw. Lucy tells it like it is—at least, how she sees things—and she takes no prisoners. She is suspicious of, and hardened against, love. Her story is straightforward, both funny and sad. To give you a sense of why Lucy is the way she is—and she’s more complicated than the people around her know—to lure you, perhaps, into checking out the rest of her story, you’ll find below an excerpt from her chapter.

In the scene, which Lucy narrates in the first person, her mother is at the stove, tending a pot of boiling potatoes. Their family has lost their farm in The Center of Their Universe and is living in town. Her father, whom she adores, is away, working wherever he can and hopping trains in between to find the next job. In the scene, Lucy tells the story of a loss she experienced at a very young age:

. . . I heard a knock at the front door.
“Get that, Luce, will you?” Mama said.
I was just turned six, and happy to help. “Yes’m.” I skipped from the kitchen into the front hall. It was Daddy’s brother Jess and a stranger. Uncle Jess introduced the man. “This is Mr. Cudahy, from the railroad.”
By this time Mama had joined us, and they said to her, maybe she should sit down. She said, looking scared, “Why?” and when she didn’t move, Mr. Cudahy said, “I’m sorry, Mrs. Matusek, ma’am. Your husband’s body was found on the tracks down in Muscatine County. Looks like—I’m sorry, ma’am. It looks like he fell off a train, got caught up under it.”
Mama’s eyes clouded over as he spoke. She started to shake. She fell to the front-hall rug and hunched into a little ball. Then she started flailing at the air. Uncle Jess dropped to his knees. He held her wrists and talked low to her. Mama started to wail, then, and say Daddy’s name. Al, Al, Al. She didn’t stop.
That’s when I couldn’t stand it. I turned and ran through the kitchen to the back porch. I scrunched up sideways in the swing and pressed my hands to my ears.
I don’t know how long I was there, but suddenly, the house smelled of something burning. The water in the potato pot had boiled away, and the potatoes had seared to the bottom. I saw Uncle Jess come into the kitchen. He wrapped his fingers around one of the metal handles, then pulled away quick. “Damn!” he said, hopping and sucking. When the pain wasn’t so fierce, he pulled the pot to the side, using his shirttail for a potholder. Even when the pot cooled, it stunk to high heaven.

For Lucy, that day is life changing. It leaves her with the memory of her mother’s voice, calling the name of one who no longer answers, one deeply loved. When Lucy returns, years later, to that town and that house with her husband, Marcus—seeking some sort of resolution—she says, “You know how some things in life stick with you? . . . I was married for years before I could bring myself to boil up a pot of potatoes. Marcus had to do it. The smell of the damn things cooking gave me horrible shivers.”

My in-laws took a similarly long view of life. They relished looking both forward and back. Two of their kids grew up to be poets—not surprising, since Harold had written poetry in his youth. In the last years of his life, he returned to writing it, and when he passed, his manuscripts moved to our house. I came upon the binder of his poems recently as I was looking for something in the attic. I opened the binder and read again the opening poem, a pensive look back to that little town that he and Ruth so loved. In the poem, he’s driving into town with a mix of joy and sadness, as he sees the inevitable changes. I was struck, as I read, that Lucy Talbot could speak the sentiments in Harold Eastman’s poem.

I leave you with an excerpt from Harold’s poem, titled,“A Trip to the Center of the Universe.” Listen for his booming voice!

The house where I was a dreamer
still stood by the path
leading east to the rising moon
and the creek that flowed
over the edge of the universe.
I saw the sun on the water
as if the ride were free
to the dawn of tomorrow
only to be brushed off
by the overhanging leaves
and I heard, as in a dream
the whispered gossip of the trees.

As I drove on, there rose up
through the malaise of river and green
a lettered hollowness of robin’s egg blue
as if laid there on the tree tops
by some quaint condor
to hatch a progeny of its own.
When the building beneath it
the places I had known
came into view
I searched the memory of my heart
for faces and voices
that had called my name.