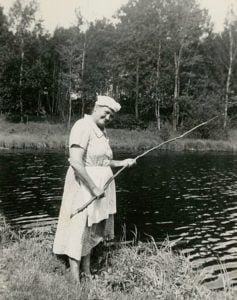 The woman in this photo, with her fishing pole and her funny cap, is my maternal grandmother, Hilda. The picture was taken on a family picnic when my mother, Rauha, and her closest siblings were young adults. They had to walk a distance to get to that lake, over rough terrain with no path. Notice that my grandmother is wearing a dress, to a picnic, and even an apron. But don’t be deceived. This simple-looking woman from backwoods Michigan was more complicated than the image suggests, and she knew herself to be capable of changing the world—yes, I said changing the world. She would have called herself traditional, but her “traditional” life was the garden my more liberal life naturally grew in. To twist familiar scripture a bit: Hilda begat Rauha, begat Donna.

It’s almost forty years since Hilda, whom we grandkids called Mummu, left this world. I wish I could talk to her now, really talk, the way female peers do. I’d talk with her about #MeToo. People seem to think the #MeToo movement is something new. Hardly. It was just quieter in the past. As I got older, Mummu told me—a sort of warning, I think—that when she’d been a teen, an older man she’d known had tried to rape her, but she’d been able to struggle free. She told me about her woman friend who had lived with her husband in a small shack close to where he worked as a logger. She’d awakened one morning after he left for work to find a man leering in at her through the one little window, which was next to her bed. He hadn’t forced his way in, but it scared her senseless.

I have never forgotten. These were #MeToo issues.

My grandma Hilda wore that dress to the picnic because that’s what traditional women of her generation wore, in our part of the world. She told me once, when I was in my early twenties, that a wife looks to her husband to make final decisions—a marital relationship that I already knew I would not choose, and I told her so. Around that same time, I changed a tire on my car after it had gone flat in her yard, and Mummu was horrified. “Call your father,” she implored. Now, I’m talking about jacking up a VW Bug, not a Cadillac Eldorado. I laughed and said, “Oh, Mummu,” then proceeded with the changing—Mummu hovering worriedly nearby.

The “worriedly nearby” part is important. There was no division between us, despite our differences. Mummu worried about me, about all her family. She worried about the whole world! Ironically, she herself had never been stopped by life. She was persistent, ingenious. She and my grandfather farmed along the shores of Lake Superior in the Upper Peninsula. She could take care of livestock as well as her house, could harvest wood and make hay—and she loved her garden.

Snow lingers late into the spring there, and frost comes as early as the first days of August. Gardening in those conditions requires ingenuity. On spring nights with frost warnings, Mummu’s huge garden looked like a nightmare flea market—old mattress springs with blankets or quilts over the top, inverted paper bags and cardboard boxes, waxy milk cartons open on top and standing on their heads over every plant. When the items weren’t in use, a section of the barn was devoted to housing them. That part of the barn looked like a cyclone had blown through it. To Mummu’s generation, trash was treasure if it helped you survive.

Mummu was a churchgoer, but if she didn’t get there, she was fine. She seemed to commune with God anywhere—in the woods and fields, in her own apple orchard. My siblings and I used to sit with her in her yard and watch the sun set and the stars rise. She told us about Halley’s Comet, which she’d seen as a girl. Decades later, when Halley’s returned in 1986, I was going through a difficult period. My husband and I had moved across the country to Boston, and I had to look for months before I found a good job—a job I needed to supplement my husband’s small post-doctoral stipend. When I finally found one, problems surfaced in the marriage, and as the comet was drawing close, we separated. In the face of all that, I found myself remembering the evening that Mummu had described seeing the comet. It came back to me as the center of this poem:

When Mummu was a child, Halley’s flamed
across the sky. And when the woman she’d become

described it to me—a child at her side—it was plain
that it had touched her, that some

love for it brought her nightly to the wooden
bench in the yard to watch the stars blink in.

These nights, lifting my eyes above the sodden
streets and night buildings, I think again

of lying in the grass, knees up and arms outspread,
listening to her. You’ll see it once before

you die, she said.
I’ll never see it again. And now, that star

is flaring into view, burning its billowy
head into the ovum of the sky, turning glass

back into sand, and blood to fire. Some would say
the dinosaurs all died when a comet passed,

and my heart believes it: that they lifted
their graceful necks above the savannas,

in greeting, that they swayed from side to side,
and burned beneath it.

Ironically, I didn’t even see Halley’s when it arrived—it was very dim during that appearance, and I was living too far north for good viewing, was in a brightly lighted city, and was too poor and dispirited to travel. Still, I knew the comet was there, and it was strangely comforting. Mummu had passed away by then, but Halley’s put her there with me during that hard time.

My name means “lady.” The name marks me. I feel called to write women’s stories, to explore the complexity of men-and-women and to plumb the deeply important relationships between women. My women characters are not carbon copies, as Mummu and I weren’t. Growing up in her world showed me that our differences didn’t need to divide us, that women’s commonalities join us irrevocably. During my teens, a number of my female peers became pregnant out of wedlock, and I heard much female judgment heaped upon them. But not by Mummu. “People make mistakes,” she said. It was profound for me to hear. With those few words, my grandmother taught me a compassion beyond the rules.

Here’s a simple fact: men primarily still hold the seats of power. I love them, individually—but as a group they still make “the rules,” and the way many of them use their power has little to do with the well-being and wishes of women. Mummu was a bit of a rebel—this would be a good time to point out that her name, Hilda, means “battle.” She was proud of women’s right to vote—especially proud that Finland, our country of origin, had been the first nation in Europe to give women that right.

Mummu wasn’t cowed by power. I have a memory of her writing to congress people about her opposition to the Vietnam war. She supported military force when justified but opposed warfare in general—war, like marriage, was not to be entered into lightly. Mummu’s activism struck me, because I was frightened by the body bags shown on the nightly news, holding the bodies of soldiers, and I was chilled, seeing the names of the local boys killed, which were published in the newspaper. I was afraid for everyone serving there.

My simple Mummu in her housedress and apron wasn’t about to lie down, to hold her tongue. She’d sent a son and son-in-law, nephews and neighbor boys to WWII and waited in agony—and some of them had died there. Mummu loved the coyotes that roamed the woods around her farm. She used to say that, as that war went on, the coyotes began coming to the house in the evening and playing together beneath the windows. Mummu saw their coming as a blessing and a comfort—as if Nature knew the world was at war and felt her anguish. When the war ended, they stopped coming.

Here’s another fact. Women are divided now along political lines, and it’s a pain to my heart. We need, as much as when Mummu lived, to fight for things that rightly concern women—the security of children, the well-being of every woman, every family, and even the planet. These are not small matters, and we are not small in number. Women need to see clearly, as Mummu did, that we can change the world. An important step is to vote. We need to send to Washington and to our statehouses people who will promise to compromise, to work across the aisle and enact policies that don’t treat children like neglected livestock, or grown women like children. Then we need to watch, and if they waffle or renege, we need to send their asses home.

I think there’s a quiet rebel in every woman. Here’s a sort of prayer that I pray, in hopes that the wind will carry it to the ears of my large family of sisters. Remember who begat you, your female line, and whom you in turn begat. Stand with men who are allies, but don’t be played—and don’t be quelled. It’s time we join together our quiet rebellions, to make a very loud noise.