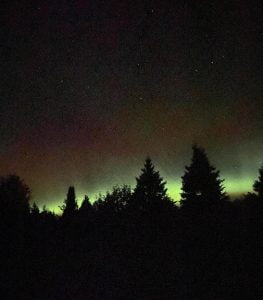 I was a literature major in college. Lit majors share a language.

One of the phrases I learned, to guide my thinking about the subjects of literature and the concerns of artists, was “man’s inhumanity to man.” Think about a book you love. Someone is likely doing something despicable in it to someone else—and it gets your blood seething, to watch it happen. Literary art motivates action. Otherwise, why bother—why bother to read it, why bother to write it? Nowadays, it’s more appropriate to our collective sensibilities to phrase it thusly: humankind’s inhumanity to humankind. That is rather clunky phrasing, though, if you’re someone who’s always thinking about how words sound.

That gorgeous display of lights in the photo took place in the pre-dawn hours of September 4th. If you follow my blog, you know that my sister and brother-in-law bought our family farm back this summer, with a plan to do some farming in retirement. Our mother had sold the place seven years ago, when she concluded it was time to move into a senior living situation. My last blog post was about the wondrous trauma of having that house and land returned to the family. Yes, even a life change as beautiful as getting one’s family home back brings uncertainty and stress, awaiting the final paperwork and the keys in your hand.

I’ve been to the farm for several lengthy stays since my sister and her family moved in, including over the first week of September. I had gone to bed early on the night of the 3rd, as I tend to do, since I’m a very early riser. By two A.M., I was awake, between sleep cycles, when I heard my sister Doreen, who’s a night owl, come up the stairs and knock on the opposite bedroom door, where her daughter was sleeping. She called quietly, probably so as not to wake me, “The Northern Lights are out, if you want to see them.” There was a muffled groan from the other room. That, and nothing more.

That wasn’t my reaction. The Northern Lights! “I’ll come out!” I hollered.

Doreen and I are seasoned northerners. We spent our childhood around that farm, visiting our grandparents, and in the mid-1970s, our parents took it over. Look at the photo again. If you could fly up over those trees, you’d find Lake Superior not many miles away. That huge lake is a character in my family’s story—it’s also a character in my novel, A Notion of Pelicans. In life, and in the book, Lake Superior “belongs to” everyone who lives around her. We all love her—she’s like a homing beacon.

Lady Superior is moody, then forceful, then calm, and she controls the weather, which gives her power to affect lives. The first frost has historically come as early as the first week of August. Everyone who lives there knows to have warm clothes at hand, starting in late August. Doreen and I went out to watch the lights—the Aurora Borealis—dressed in winter hats, gloves, and heavy coats with the hoods up. It was in the high thirties that night—so the mosquitoes were in hiding. We could see our every breath.

The shimmer of light to the north was at first a narrow band, mostly green, not quite clearing the horizon. Within minutes, small peaks began to appear, fingers of light here and there, undulating, reaching higher. Watching their movements, I felt like they formed a curtain between me and . . . I don’t know, some other world. I felt my body relax—I mean literally, muscle fiber by muscle fiber, corpuscle by corpuscle. My accumulated stresses—the ones most on my mind—began to ooze from my pores and collect on my gloved fingertips, dropping invisibly from there to the ground.

First to fall was the shock I had buried in my memory since watching my mother take her last breath on her living room floor. I was alone with her when she passed, and there was nothing to be done for it, not the CPR I was performing, not even my assuring her it was okay for her to go, and with her family’s blessing. I’d buried deep, deep, so I could breathe, the sound of her ribs cracking when I did the first chest compressions—sounds too painful to carry around every day.

I began to take pictures of the Aurora lights.

They were soon delicately tinged with red, then violet. After a while, the memory of fighting tears for days sloughed from my shoulders and off my fingertips. Hot tears. Why? Roe v. Wade. I was never in a position to have to consider ending a pregnancy. I never needed a procedure to clear a miscarriage. But I’d be in trouble now, if I did. Hot tears. With the court ruling, women’s arms had just been cut off at the wrists. And what next? Binding our daughters’ feet?

I’d rather live in this country than anywhere else—but it’s damn frustrating, at times, to be a woman here. We’re still expected to receive an insult through lowered eyelids. However successful a woman becomes, she has to endlessly navigate places and situations where she’ll be talked over or patronized. And now, on top of it, there are people itching to be in charge so they can take away a growing list of people’s most searing, intimate decisions, decisions even to save or sacrifice their own lives. I suppose it could seem an ironic nod to diversity.

But even those hot tears fell away, in the presence of Aurora’s glowing curtain. Such calm. Doreen and I mostly watched in silence. Soon, the lights began to shift. They spread upward, the curtain rippling across the sky like a swath of silk in the wind. Then the memory and sensations of a conversation I’d had, years ago, pearled and dropped from my fingertips.

It was when my novel came out. I’d met a woman who was going through a divorce, a path I’d walked decades before and explored in part in my book. She was naturally interested to talk to me about it—and I, to her. So we met at a coffee shop. I’ll point you back to my opening question: who needs Heaven on earth?

She did, as anyone does, who walks that road.

I haven’t talked about my novel on this blog in a long while. The book is set around a church, which my coffee shop companion found intriguing. The plot weaves together stories narrated by women who are part of that church. They are (to use old-style church language) both sinners and saints. Well, more on the sinner side.

One of the narrators, a college professor named Toni, says about her husband, “Like all men, frankly, Sam can be a prick.” My novel is filled with pricks—only they’re not all men. The women can be pricks, too. The eldest of the narrators, a businesswoman named Lucy, says, “I’m not one to quibble with the Lord. But some days I wonder. Why’d He put men and women in the same galaxy, let alone the same house?” I loved writing Lucy’s character!

Now, because I’d found myself endlessly asking that same question, and because I am one to quibble with the Lord, I wrote a churchy book filled with flawed people as my answer. My best guess is, having men and women share the same space is to their mutual benefit. But nothing worth having comes without effort, no? And even pain? As for church, flawed people are the only people I’ve encountered there, at any church, and I doubt I need to point out that man’s inhumanity to man can flourish there, too, subtle and low-key.

When COVID came, I stopped doing author events. I put aside my book and hadn’t looked at it since. Truth is, you start to feel kind of queasy about the things you’ve written, looking back. But a couple days ago, I picked the book up, in anticipation of writing this essay. I picked it up and started chuckling at the funny, imperfect souls who people its pages. There are no outright villains in my novel—in one of my plays, which I also write, yes. But not in my little love song to people who are relationship-starved, or spiritually searching.

But let’s not forget my coffee-shop companion, who sat across from me a bit stunned but hopeful about the possibilities taking shape in her life. She was a member of a very conservative church, and she acknowledged it—she said suddenly, in a low voice, leaning across the booth, “Women in my church are told not to read a book like yours.”

Even that memory, so corrosive to my calling as an artist, slipped painlessly to the ground as I stood outside at 2:00 A.M., looking at Nature’s show. There weren’t many of us watching, but Nature didn’t care. She’s a good role model—she just carried on, light oozing from her fingertips.

Have you noticed—that I keep referring to inanimate things as female? Lake Superior? Nature? I learned in high school Latin class that nouns that hold or contain something—like a mother gestates, then rocks, a baby—are feminine, and their root form tends to end with the letter “a.” That last bit doesn’t mean much to English speakers . . . but no matter. What matters is the power of the feminine to nurture and to protect—a power we use inside our own four walls and should be harnessing by forming alliances. Lest you think I believe it a power that resides only in the human female, let me say this: some men I’ve known have been as nurturing as anyone born female.

I’ve had my share of threshold experiences in life, like the border between worlds that I sensed that night watching the Northern Lights. But you can’t cross that border. You have to go back to the usual, the ordinary. That means picking up your stressors and returning to the complicated path we all walk through life. If we’re lucky, we hold hands with some important other, or others. But at life’s end we have to let go and move on alone.

In my case, returning to the ordinary means a compulsion to write, mostly about women’s lives, to counter the negative, sometimes-ancient ideas about women that we ourselves can fall into believing. It means, for me, writing and living with the consequences of it, whether it’s being misunderstood or laboring in obscurity.

I’ll point you again to my opening question—who needs Heaven on earth? No, there’s a better question.