From Birds’ Eyes to a Bug’s Knees: On Writing and Introspection 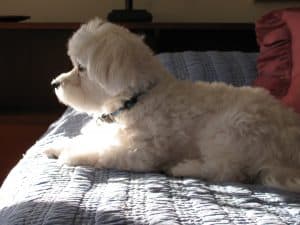 Have you spent much time—figuring out how you figure things out? I have. I do it by writing, following thought after unfettered thought, wherever it leads, then holding my breath and sharing.

Sometimes all that introspection ends in a fiction. The generating event in the action of my novel, A Notion of Pelicans, is a late-1800s visit from a flock of pelicans—birds that may have been sent by God. Lavinia Hansen is moved by the pelicans’ eyes as they circle over her head, so moved, she founds a church on that spot.

One of the underpinnings of the book is the idea that the creatures of this earth are part of a family. The idea isn’t as warm-and-fuzzy as it might seem. This blog post will go a long way towards explaining why.

If you’ve been following my blog, you know that Notion, which is set around Lavinia’s church, was inspired by an encounter I had with a flock of pelicans. Lavinia’s experience with her birds exactly parallels mine. Just imagining those birds, our shared reaction is understandable—they’re huge, dramatic.

It may seem counterintuitive, but I’ve had equally startling moments with insects—and my encounters with creatures both dramatic and diminutive have had profound implications for how I’ve lived, what I think, and what I’ve written. To tell you about it requires a longer than usual post. If you’re interested, and inclined to invest some mental energy, read on.

My first “bug encounter” took place in a Western Massachusetts bar. It was the summer between my divorce and the start of graduate school—a day spent with my sister. We’d had an unfruitful afternoon searching for an apartment for me for fall and had taken refuge at a round, wooden table while we waited to catch a bus back to Boston.

As divorces go, mine was friendly. Still, it was a walk through hell. That day, at that corner table, my spirit reached its lowest low. Anger . . . fear. . . despair . . . a deadly mix roiled up and out, and I said something like, “It’s HIS fault, my whole messed up life.” I was referring, of course (unfairly), to my ex. It was a moment beyond help, and my sister knew it. We sat unspeaking, eyes locked—mine bitter, wild, overflowing, hers pained and wide in impotence.

That’s when the spider dropped like a small bomb into the air space between our eyes. Dangling from its silken thread, tiny face fixed on me, it gazed—dare I say—compassionately. The moment was so surprising, my sister and I started to laugh. The tension broken, the spider ascended, tucking up its little rope and disappearing into the rafters. I was left with the unshakeable thought it had been sent, that its gaze of compassion reflected the hidden gaze of Something Else.

That gaze of compassion has stayed with me and is echoed in my novel. The character Toni speaks of having been fascinated by an antique print that hung on her grandparents’ wall—a lone wolf standing on a hill, gazing with what Toni thinks is love at a cluster of night-shrouded dwellings below. For Toni, the wolf represents God, watching, hidden. I don’t suppose it’s surprising that my grandparents had that print hanging on their wall, as well.

My second mind-blowing bug came many years later, from a family of box elder bugs that gathered every fall on the south side of our house. I’d remarried, and despite my husband’s efforts, a few found their way inside. Whatever writing project I was working on seemed to fascinate them. Whether longhand rough draft on yellow paper, or final copy rolling out of the printer, it made no difference—to and fro, to and fro, some bug or its cousin would walk across the pages. I was okay with it, though. I would talk to the bug. I would tell it what I was doing.

Earlier that week, I had submitted a piece to the religion section of the local paper. It was risky to put into circulation, something folks might not receive well. Something I share with my character Toni, who’s a sociologist, is that I think outside the religious box but have found a way to fit into a faith community. Still, I’m aware that my ways seem odd. I’d traveled by bus the summer before and encountered a man I thought might be Jesus. So I said so, in print, and sent it to the editor.

In those days, our newspaper was delivered right to the door, tucked inside the storm door. On Friday, religion section day, the bang of the door told me the paper had been delivered. I sprinted to retrieve it and spread it open beside me on the couch. My piece was there, as a guest column. It covered a third of a page, and the heading blazed across the top: WHAT IF YOU COULD TAKE—A BUS RIDE WITH JESUS? I scrutinized the essay. How out-there was it? Should we take time to sell the house? Or pack and run?

In the midst of my obsessing, I noticed one of the box elder cousins marching across the living room carpet. The bug reached the couch and came on up. At the top of the cushion it headed for the paper.

In moments, it was back. It scuttled over the lip of the cushion, onto the paper, and straight to my essay. Straight to the title, I should say. As I stared, taken aback, it positioned its antennae carefully at a splayed angle so they just touched the “J” in “JESUS.” There it stood—and stood, and stood, a living red-and-black pointer.

Like the young actress Claire in my novel, I incline strongly to the mysterious and mystical. Staring at that box elder bug, which had been so intent on reaching the newspaper, words from the book of Philippians flitted into my mind—Paul’s pronouncement that every knee on earth and in Heaven and under the earth will bow at the name of Jesus. If this bug has knees, I thought, it’s on them.

One day, having sat down to attempt the bug essay, I launched into procrastination mode. I literally stood up and bolted from my desk. It was summer, and I went out on foot—but I didn’t get far. As I walked down the sidewalk along a strip mall, a downright feisty spider dropped into my path from the mall’s overhanging eaves. Like the spider at the bar, this one hung on its string exactly at eye level, face turned to me. Its legs flailed, scolded me without words. Knowing what I was avoiding, I read in its frenzied ballet: What are you waiting for? I wheeled, chastened, around it. “All right, all right,” I said—yes, I said it out loud—and went home and picked up my pen.

What I wrote that day was an earlier version of what you’re reading in this blog post. But something happened later that forced me to rethink what I had written. Vacationing in Missouri one Fourth of July, I came up against a brown recluse spider. Not that I knew it was a recluse. I figured that out after I’d been bitten and ended up delirious, in pain, and freaked out.

The spider was a fierce thing. Its bite (four bites, actually) produced on the upper back of my leg a swollen-bruise of a mark, the size of my outspread fingers. The mark was mottled, red, white, and blue-black—appropriate, given the holiday. I’d gotten out of bed that morning and pulled jeans on over baby-doll PJs, to take our dogs out. I don’t know where the spider came from. Back in the house, kneeling in front of my suitcase, I suddenly caught sight of it motionless on my left thigh. The eight-legged shape against my blue jeans shot a visceral reaction through my body.

At first, I sat frozen. I’d never seen a recluse but had read about them. That article had been rather sappy—it said they’d gotten a bad rap, it called them shy. The spider on my leg was not that. It was in clear sight and made no move to flee. I had the eerie sense it was there to be seen. Panicked, but not wanting to hurt the spider, I jumped up, slapping at my pant leg. The spider disappeared. I searched, but, not finding it, picked out clothes for the day and headed for the shower.

What I didn’t know was that the spider had run down my leg and up inside my jeans. When it reached the dead end at my bunched up pajama leg, it began to bite. I vaguely realized something was wrong and began shaking my pant leg. The spider dropped out onto the floor, ending up dead in a jar, a learning opportunity for the medical student working that morning with the doctor I saw in the ER.

I didn’t develop the serious complications some people have, and there’s now barely any sign of the bites, but I was left with lasting effects. If I have to retrieve something from a place where spiders might live, like a closet or drawer, I do so with ridiculous care—and I have a compulsion to shake out clothing and shoes before I put them on.

The encounter with the recluse shook me up. I had thought for years about my earlier bug encounters and come to the conclusion that the bugs were divine emissaries. The spider in the bar had saved me when I was in bad need of saving, the spider at the mall reined me in when I was resisting what I felt to be a call, and the box elder bug upended me by showing reverence for a name I didn’t think it could know.

But how did the recluse fit? If bugs—some bugs, I mean—appear and light the way, then what was that encounter about?

Maybe the recluse was just a spider, in the wrong place and needing to defend itself, as a trapped creature will. But if I’m open to the earlier bugs’ having been sent, I have to consider that the recluse might have been sent, as well. If so, the Sender was One with a bite, a little dangerous. I have since read of a man bitten by a recluse who regained the use of his paralyzed legs. I ask myself. Was my recluse sent to shake me up, to pull me—as the spider had been pulled—out of the sheltered place I prefer to live in?

Writing your truths, with un-blinkered eyes, leaves you feeling vulnerable. It would be easier not to write publicly about traveling by bus with someone who might be Jesus, easier not to write about bugs as emissaries—and setting a novel around a church is like stepping into a hornet’s nest, especially when you fill the church’s pews with an assortment of imperfect people who struggle to find spiritual mooring and who share many of your own fears and quirks. It would be easier to run the other way.

But I don’t. I’m a far cry, still, from figuring out this life of mine. Besides, I’ve been down that path—some bug or bird, somewhere, would look me in the eye.