Frogs: Parables for an Election 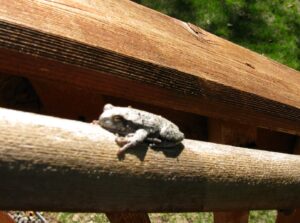 There’s something friendly about a frog. The year I was in first grade, my family lived with my father’s parents on their small farm. A few Holsteins and their calves roamed the pastures, along with chickens, barn cats, and a scruffy collie. There had once been workhorses and pigs. The pigpen was still there, a visible reminder, and the horses’ leather harnesses hung dust-covered on pegs in the barn. The farm seemed magical. My brother and I spent our time outside, catching things—butterflies, lightning bugs, snakes. This is where the frogs come in. We’d splash into the creek after frogs or chase them in the garden or woods. Frogs were my favorite. I took this picture of a tree frog one morning not too many years ago. It’s climbing the railing of our deck, maybe drawn by the smell of the coffee my husband and I were savoring in the sunshine. I love its feet—the delicate little cups that give it super powers to go anywhere.

This strange year, 2020—delivering everything from a rampant virus to controversy over missing mailboxes, and all on the eve of a national election—this odd year has me thinking about frogs, and that gets me thinking about humans, or rather, the helping of humans.

After that “first grade” stay with my grandparents, my family moved to town. The mine that my father worked at had closed, and he’d found a job with a construction company. The company was small—the paycheck was, too. But we weren’t alone. The whole area had been left struggling after the mine closed. It’s a beautiful place, blessed with lakes, from the big lake—Lake Superior—to small ones hidden in the woods. I’ve spent much of my writing career reflecting on my origins there. Some of those little lakes in the woods offered isolated campsites—rough openings in the woods, with a picnic table, a wood-burning cook stove, and a leveled area for pitching a tent. When we kids were young, five of us ultimately, my family used to camp at those lakes. Nothing fancy—just a canvas tent barely big enough for seven, but zippered to offer some shelter from wind and bugs.

On one particular camping trip, we had a nightly visitor. Each evening, my dad would build up the campfire and then light the Coleman lantern. Next to the picnic table was a stump, and he placed the Coleman on its flat surface. Then . . . we would watch. Every winged bug for miles would soon swarm the lamp—gnats and silvery moths from small to large. Sometimes a moth would fly too close, brush its wings against the hot glass, and fall singed onto the stump.

That was what our nightly visitor was waiting for.

He was a small frog, and every night, he emerged from the dark as soon as the lamp was lit and positioned himself below the lamp. He was smart, in the way of frogs. He’d seen campers enough to know that campers brought light, and light brought dinner. While the frog waited for a falling moth, he would snag the occasional gnat right out of the air with his long tongue. We kids oohed and ahhed, then sat silently, enchanted. Even now, years after we all put off childish things, if the subject of our family camping trips comes up, someone will say, “Remember the frog?” There’s an echo of those nights in the question, a childlike lilt to the voice when we remember that wise frog.

One does put off childish things.

After my husband, Bruce, and I married, in our mid-thirties, we bought our first home, a yellow house in the woods. It felt good, solid, to be settled, after so many years in transition through college and first jobs and separate graduate programs. Meeting, then marrying, and moving into the house—doing the various things that need attention around a home—we were happy. More than once, Bruce stopped his work to say, “I think I have genes for home ownership.” From the way he said it, I could tell those genes were now as happy as could be.

The windows and windowsills were in need of cleaning, so out came buckets and rags. Out came the shiny new Shop Vac. The living room had a large picture window, with crank out panels along both sides. My job was to remove the screens and open the windows for vacuuming, then wash them from inside. I cranked open the first side panel. Creak, then again, creak. Slowly the metal arm at the bottom of the window emerged from the small cave it would retract into. Bruce, stationed outside with the vacuum, exclaimed aloud. I went out to see what he saw. With the window fully extended, the interior of the crank housing was visible—and inside, perfectly preserved and bleached white, were the bones of a frog.

We soon had the second window opened and found another perfectly preserved skeleton. The bones were delicate, lovely to look at—and so sad. Those unfortunate frogs had ended their days tragically, locked into the windows by some prior season. My mind was awhirl: how had they been trapped? Unaware? Inexperienced? Or an impulse to keep to the familiar? We took the skeletons carefully from their tombs and moved them to a resting place in the woods. It seemed the right thing. I wonder now that we hadn’t taken a picture of them. They were that beautiful—and so haunting.

Like the wise little frog at that long ago campsite, frogs continue to live alongside us, fellow citizens of the planet, sheltering in people’s gardens, climbing our railings and walls and windows. Bear with me through a final story. The house in the picture, with that frog on the railing, had deep window wells. It was another house in the woods. The laundry room was in the basement, and while we were folding laundry one day, we were amazed to discover frogs clinging to the glass of its egress window.

Not one, not two, but a half dozen frogs, looking in at us. The window well was a frog nursery—some small, the size of grapes, others a bit bigger. We never saw the parents. How they’d come to leave eggs outside our window was a mystery, though we imagined they’d been drawn by bugs that had been drawn to the light. The bottom of the window well was thick with wet, decaying leaves, and the babies were everywhere, some half burrowed, some hopping around. All those frogs had no way out. A few tried to scale the walls, but the well was too deep, and they would fall. The luckier ones had managed to reach the window, where they stared in at us—longingly, I thought, so imploringly.

I know what you’re thinking. I was “projecting.”

Perhaps. But I prefer to think that it’s coming face to face with the divine. I headed to the garage, where Bruce had stowed some boards. One was six inches across, maybe a foot longer than the height of the frogs’ prison. I picked it up and ran to the window well, where I dropped it carefully in. Then I hurried back to the laundry room and, with the light turned off so they couldn’t see me, stood and watched.

One frog soon hopped to the bottom of the board. The pitch was precarious—it must have seemed that the board stretched into a forbidden heaven. The frog contemplated it for a while, then hopped up . . . paused. It hopped some more . . . paused. Finally, it stood at the pinnacle of the board. There, it took its time looking around, then it was gone—never to be an imprisoned skeleton. I kept checking the window with every laundry load. Frog after frog made the ascent. My heart soared for each one.

This summer, as I said earlier, frogs are on my mind—particularly those white bones and the newly hatched babies climbing up the board. In this strange year, 2020, we’re at a crossover point in the U.S. Thinking of my own family history, I wonder: will we continue to be the country that welcomed my immigrant grandparents, that earned a place of leadership in the world through its policies?

Having grown up around farmers, I saw that every animal was part of the family. I have cousins, girl cousins, who grew up on a working dairy farm—the three of us more like best friends. We’d do back-to-back sleepovers, first at my house, then at theirs. Our parents were saints, putting up with constantly changing households. Their farm was a sophisticated operation, and my stays there showed me that farmers are selfless in their work. The animals’ needs are met systematically and on time.

This fall, I’ll be thinking about the days I spent at that farm, and I’ll be thinking about our dysfunctional government in Washington. These last months have brought something painfully into focus. People in federal leadership don’t live like farmers. So many seem jaded—publicly comfortable paying lip service to meeting the country’s needs, but never coming together across party lines to make it happen.

What’s to be done about it?

We’ve endured long years of institutional gridlock—a growing scarcity of empathy—and the near-extinction of cooperation and respect for one another. For just a moment, think of us all as frogs. We’ll have to drop our own rescuing board into a collective window well. The election coming up is critical. Who we are as a people, and how we’ll treat one another from here on, will be determined by the circles we blacken on our individual ballots. Please look past party affiliation. Choose selfless people who will work for the common good, who will bring back compromise—leaders who won’t react to a window well full of trapped frogs by walking away with a shrug. In human terms and in our current economic situation, electing people who would shrug produces houses of Congress that will go on vacation while millions face hunger and homelessness.

Parables invite reflection. At this moment in our national life, we face circumstances similar to the ones in these stories I’ve told. We can, and I’d say we should, envision a lantern on a stump. We should see ourselves as both the hungry frog and a light that provides food. We should imagine a board dropped into a window well, bringing rescue. We should imagine, first, that we are the ones dropping it, and then understand ourselves to be the ones offered rescue and a more expansive world. With luck, God willing, we will see the board, understand the board, and start our climb.

Or, like those white bones that Bruce and I found at our first home, we can just hunker down in our window caves, oblivious, perhaps choosing to keep to the comfort of what we know and have—where, sadly, we may listen to the creak of the metallic arm as it retracts, and watch the window draw closer until there’s only darkness.