Flames: The Life of a Writer 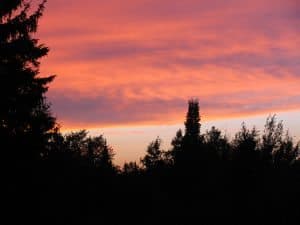 I like quiet. I like to be alone. I enjoy a social gathering but afterwards need to shut my metaphorical doors and unwind.

This perhaps seems a strange claim, coming from someone who spends a good deal of her time excavating her life and sharing it in the form of written texts.

It’s not strange, though. I’m a solitary being—as in, isolated in my biological self—a solitary being living amongst other solitary beings. It’s lonely, at times. I, for one, am heartened when I’m offered glimpses into the inner worlds of other people. This has happened most fully, most often, when I’ve read books. In life, people seem to hold back. There’s something freeing about putting life, a stylized version of life, onto a page.

Growing up, I haunted the local Carnegie Library. I can still smell its stacks, a musty odor of dust and aging paper. I can feel the books I used to pull from its shelves. This was before paperbacks were common. The books had heft, and texture.

I haunted the place because I was in training. I wanted to touch others, through books that I already knew I would write, and I wanted to see how writers before me had gone about it.

Writing is a balancing act. It’s like acting. When I was a younger woman, I played the role of M’Lynn Eatenton in Steel Magnolias. M’Lynn is the mother who loses her daughter. It’s a highly emotional role. Toward the end of each performance, I had to “lose it.” My director worked that scene hard. He worked me hard. I had to go deep, he said, go dark, and yet I had to be in complete control. I had to appear to lose it, utterly, yet never let the emotion I was summoning from within take over.

By the end of each performance, I was limp. An oddly empowering catharsis.

Wordsworth said poetry grows out of “emotion recollected in tranquility.” I think of that as another riff on what my Steel Magnolias director taught me, and I try to apply the idea in my creative work. Whether I’m on the stage or at my writing desk, I dig through what I’ve felt, but I impose order and purpose on it.

I’ll end this post with a poem. I began writing this one when my writing group decided to write about an emotionally strong early memory. I was busy with teaching and, before the meeting, had time only to jot down some strong memories. Years later, I went back to the list, and this poem was the result. It weaves together the memories that had come to me then—explores why they emerged together, and how they were linked. The answer is in the title: “Flames.” Fire, a metaphor here for emotion, warms—it can also burn.

In the poem, you’ll see a number of the subjects I write about: family, ethnicity, small-town life, rural living, even my complicated relationship with spirituality. It’s a poem spoken to myself. I do a lot of talking to myself, even when I’m not writing.

Think of your mother’s rabbit-hair coat, how she
wore it to church and sat in a circle of women,
women wearing coats in a cold
church basement, how you ran to her there,
first uneven steps, slapped your hands silken to her lap
then looked up, into the eyes
of a stranger,

how the women laughed, how a firestorm
burned in you
as you turned to your mother’s reaching hands.

Think of the old barn, long fallen,
think of milking time, how your head
was snugged against the belly of a cow named for the star
on her forehead, that Finnish name, Tähti,
how her teats were warm, your hands were small,

how you pulled and the milk hummed a hot,
erratic tune you felt in your knees
against the pail’s curved wall.

Think of winter, being thirteen
in the back seat on Jessieville Hill, its icy
upward arc the way home,
thirteen and mortified, your face on fire,
the back of the car fishtailing,
losing ground—how the whole family would spill
from the car to push it, again,
up the hill,

half-bald tires spinning,
calling to the neighborhood: To your windows,
people—a show, a show!

Think of standing, still standing
at your mother’s window, watching her in the garden,
how she’d knot a red huivi around her head
and stoop, singing, in the pea patch,

how she was all at once her mother,
your sisters, you,
flames in all your hair.