Drinking Kahvi with the Uncles: Keeping Our Stories Alive 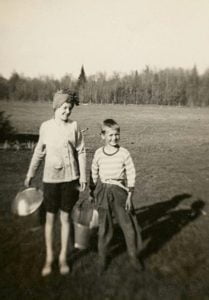 Drinking Kahvi with the Uncles

Many years ago, I went home to our family farm to visit my mom and dad. While I was there, my mother’s brothers Ernie and Bill came by. We fell into telling family stories over kahvi, which is Finnish for “coffee.” We sat a long time at that table, reminiscing and laughing as the blues and grays of evening began to filter in through the window. It struck me that no one turned a light on—no one wanted to break the spell. My uncles were educators and good storytellers. There was a playful impertinence in their eyes as they told their stories, and I understood it completely. Drinking kahvi with the uncles, I saw again what I’d always known: playful impertinence runs in our family. It’s why I write, why I write what I write—more than that, why I write poetry, which to much of the world seems a waste of time.

Our family farm was started by my grandparents. Mom and her siblings grew up there. The picture with this post is of my teenaged mom and Ernie, who look to be on their way to the barn for milking. My grandmother had written on the back of the photo and identified Ernie as “Urho,” which is the Finnish equivalent for “Ernie.” I suspect the history of the photo is that it had been sent to family in Finland and later returned. In my family’s way of thinking, a photograph is an artifact, something to be curated and understood. The window we were looking out as we drank our kahvi that evening looked out exactly where my mom and Ernie are standing in the picture.

We have a familial need to encounter and interact with the world primarily through language—we’re voracious readers, and many of us are writers. My mother’s grandfather was a writer in Finland. He wrote morality plays and stories, often for the church, stories that despite their narrow purpose reveal quirky imagination. The generations that grew up in America have generally stepped away from that sort of churchy language but haven’t discarded the sense of social and personal responsibility.

My mother’s mother was the only one of my grandparents born in the U.S. She wrote about her growing up years and also contributed to two Finnish-American newspapers, in Hancock, Michigan, and Detroit Lakes, Minnesota. A few of us have made literary writing our career. My sister Doreen and I are academically trained poets who teach, and we have a cousin who has an MFA in playwriting. Others in the family write for their jobs, technical or practical writing, or they write for their own pleasure. Uncle Bill wrote prolifically: stories, essays, and poems that Ernie edited into a book after Uncle Bill passed. He titled it Finn. More than one of the pieces in Finn is strongly tongue-in-cheek.

“But why poetry?” you might be thinking. “Who reads it?”

Precisely. I’ve wondered that myself, but not for the reasons you’d think. Despite having studied poetry formally, I’ve always felt a bit out of synch with where contemporary poetry is, and I feel safe in saying that my sister could say the same thing. As an example, poetry today is mostly free verse, which has its strengths, but Doreen and I also respect traditional forms and see strong value in writing formal poems like sonnets and sestinas.

We grew up listening to Finnish spoken at our grandparents’ homes and in our own home when our folks were having some discussion they didn’t want us to hear. Finnish is a rhythmic, melodic language that wound itself inextricably into our brains. We cut our literary eyeteeth on the Kalevala, the epic Finnish poem that’s a collection of ancient songs. Rich with repetition and parallelism, the Kalevala weaves together sounds and words and ideas. The title itself is melodic, accented most heavily as Finnish words are on the first syllable: KÁW-lĕ-váw-law.

Poetry is serious business, mostly—it takes itself seriously, as it should. But a consequence is that the casual or episodic reader may not see that there’s fun in it. I’m given to playing in my poems, starting with the sounds of a poem. (Remember the Kalevala?) Or I’ll play with a poem’s subject—irony and understatement being favored literary tools. I have chuckled my way through draft after draft of some bratty poem that I know is a mischievous “sticking out of the tongue.”

Doreen is less inclined to that than I am. But her husband recently told me that what had first attracted him to Doreen was her puckishness, a playfulness, which he soon came to see was a family trait: a love for language linked with playfulness. I have seen Doreen’s usually serene face light up with circumspect joy at her own impertinence, reading one of her poems. That light is what I saw in my uncles’ eyes that evening at the kahvi table.

Here’s the story they told that evening that made me think, “Aha! That explains my poetry”—a story about a bachelor Finn who had built a shack a mile or so away, who would walk through the woods to visit my grandparents, appearing from the brush like a sudden, shy deer. I recorded the story in a poem, of course, not long after that trip home. It’s dedicated to my sister.

When our uncles were boys—
Finnish boys, young Villi ja Urho—
they were bad. For the fun of it, they poked
and teased whatever they could. Girls,
cows, bats in the hay barn,
each other. They even made fun of our mother,
knob-kneed in her barn clothes.

And when Erkki walked up from his shack—
the taste of Mummu’s kahvi swirling
in a saucer already on his tongue,
wearing long johns in July and trailing
the odors of kerosene, bacon, and fish—
the pranksters took to the brush
like a couple of otters intent in their watery
glide on dethroning a turtle
from its log (quick thrust of a nose!)

and hung rocks in the branches of alders
hanging into his path—
so when the old Finn went home,
the rocks came down
on him. The bachelor cursed and glowered,
Paappa lectured, Mummu frowned,
I suppose,

but the high jinks went on,
and even fifty years later, as adult men
retelling the tale—over our mother’s
hot kahvi, in a cup—their eyes
shone in a delectable way. I doubt we can help
what we do: I in my poems, you
in yours—metaphorical
rock-hangers.

I am my uncles’ niece. I went into education, as they had, a love for books and learning having been modeled by my grandparents, and when it comes to art, I want readers of my work to pass beneath the alder branches of what I write and to be surprised by a rocky shower of emotion and reflection. Like most of us, I suppose, I spend much of my time laughing at, and marveling over, my own bone-headedness. I am often the target of my own teasing in my mischievous poems and stories. Of course I laugh at and marvel over our collective bone-headedness when I write.

The world needs writers—to think out loud, to wonder, to translate. It needs essays and novels, but especially poems, so like those sudden, startling stones that fell onto Erkki—big impact in a small package. Poems don’t have to follow some shared track in subject or style or tone. They need only to wake us up as we sleepwalk through life. We do tend to sleepwalk.

Poetry is far from a waste of time.

Maybe it wasn’t nice of my boyish uncles to put those rocks into the alders. But it was human, and I’m glad they shared that story during those twilit hours at their sister’s table. In telling that story, my uncles gave me the long view—they let me see them as kids, striking out to make some mark in the world as kids will, two troublesome boys who grew up to be very fine men that I have long looked up to.

Their telling of the story let me see—in a vivid and funny way—my grandparents providing friendship to a neighbor who, for whatever reason, lived the life of a hermit: colorful, memorable, alone and in need. Like others of that immigrant generation, my grandparents worked around the clock, caring for livestock and seven children. But they made time for hospitality when Erkki came around. It was an important, lasting lesson for their children and grandchildren—the “rocks in the alders” episode notwithstanding.

I puzzle over what it is in my family landscape that, across generations, has linked this love for language with playfulness. Are we wired that way? Is it learned? The story my uncles told about those rocks in the branches is small, unimportant, but not to me. We’ve lost many in the family since then, and we no longer own the farm. How lovely it would be, if I could close my eyes, open them, and find myself back at that table—for an hour, even—drinking kahvi with the uncles, laughing impertinently, keeping our stories alive.