An Ordinary Day in July: What John Milton Taught Me about Writing 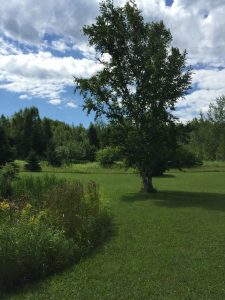 A July day at our family homestead, worlds away from Milton’s Cambridge

I learned to read from a Dick and Jane reader. I remember the chalky smell of the classroom, the confines of our circled chairs. Each word was breathtaking, the way it filled its page, and as the words began to come together to create sense—Oh! I was at the border to a new world, and Sally, Dick, and Jane pulled me across. Those first steps led eventually to an ordinary, yes, ordinary day in July, when I came face-to-face with John Milton.

I was born wanting to read, born wanting to write. It’s likely genetic—my great-grandfather was a writer, and many in my family suffer the affliction. Yes, I said affliction. Sooner or later, if you set out to publish, you’ll hit another border, one that isn’t easy to cross. Wanting a book and having a book are two different things.

I had to wait until my sixties to see one of my titles on a book cover–my  novel, A Notion of Pelicans. Over the course of my writing career, I had published works individually—poems and essays—and I’d had a play produced, but I didn’t have a published book. By my fifties, I was feeling I might never have one. I had several manuscripts, including the novel. But I might as well have had none. I felt like I was babbling from some hidden shore, and no one could hear me.

I knew from reading writers’ magazines that I wasn’t alone. Many young writers were, in various ways, saying the same thing. Of course, I was fifty-something, approaching the border of this world and the next. Nearing that border makes you take serious stock. Was it acceptance I wanted? Was it the lure of fame? So I began writing an essay to figure it out.

For me, writing is weirdly collaborative. The work finds its own shape, takes cues from outside myself, if I keep my eyes and ears open. This particular essay took itself to a wildly unexpected place.

I began the draft by reflecting on a writers’ conference I’d recently attended. I’m an introvert—large gatherings drain me. At the conference, I’d felt out of place, invisible, dispirited. But everyone looked to be some degree of desperate, desperate to get somewhere professionally, or desperate not to slip from wherever they were. The angst was palpable. Turning the key in my own front door at the end of that trip was a relief.

I grappled with the essay for a week. What would it be about? Where was it wanting to go? I’d written my way to a conclusion but had a nagging sense it wasn’t right, that the essay hadn’t come into its true purpose.

In bed one night at two a.m., I found myself still thinking, still puzzling, so I went to the desk and lopped off the ending. I sat, staring at the page. What did the essay mean to say? And what did it have to do with me? The awful question arose: what made me think I was a writer, anyway? Around three, I shut off the light and went back to bed. Just as I was crossing into sleep, a voice echoed in my head: The sheep look up, and are not fed. It felt astonishing.

My first thought was that the words were biblical, Jesus having told Peter to feed His sheep. I repeated the line a few times and managed to remember it through several hours of heavy sleep. The next morning, I discovered the line to be, with one dropped word, John Milton’s. The hungry sheep look up, and are not fed. It’s from Lycidas, his elegy for Edward King, a college mate of his at Cambridge who’d been lost by shipwreck.

I hadn’t looked at the poem in twenty years, so I re–read it. Milton’s persona at one point imagines Lycidas’s bones at “the bottom of the monstrous world.” The image struck me—bones, blind and alone on the sea bottom, marked only by creatures of the deep. It was a powerful image for death. But I was even more struck by how the poem echoed my struggle of the night before, how it mirrored my own writerly anxieties. Milton’s struggles as a writer are evident in the poem.

I had a personal connection to Milton’s Cambridge. The summer I received my MFA, I taught writing in a study-abroad program that was housed there. One of my colleagues was a smart, witty Englishwoman, a writer and critic who had a generous heart and a tongue of quicksilver. We bonded right off. The two of us traipsed about Cambridge with our classes, and on our free days she and her husband hosted me at their peaceful cottage, took me to the theatre, even drove me to the seashore.

Most luckily for me, this new friend was affiliated with one of the colleges at Cambridge, and she had access to parts of the university that were closed to outsiders. One day, an otherwise ordinary day in July, she ushered me into a private sitting room. In that quiet, cloaked room, I stood awhile staring at Milton’s death mask.

The plaster cast of the poet’s dead face floats in my memory at eye level against a void of black. There’s nothing else—no room, no protective case, no daylight, no sound. Everywhere we’d gone, both the smaller venues in Cambridge and high-traffic sites like the British Museum and Stonehenge, we’d had students in tow and contended with waves of tourists. We may have had students with us that day, too, but if so, time has washed them away.

As my eyes traced the lines of Milton’s face and gazed into those fixed and shaded eyes, I knew why I had studied literature for so many years. John Milton wasn’t poems alone in a book, nor were the poems mere print on a page. They were the voice of a dead man, someone who had struggled in life, like me, like us all. It was the human knot that held me, year after year, page after page.

My English friend, who gifted those moments to me, has since passed away—she has passed, like Lycidas, through the bottom of that “monstrous world.” Of all she did for me, it’s the afternoon at the Milton mask I most cherish. Whether she was allowed to take an outsider there, or did so looking over her shoulder, I don’t know. But it was for me the best gift—not entry into the world of publishing, which she freely moved in, but a look inside myself, a long glance at my own reasons.

After the disembodied voice spoke, that night as I lay in bed, I asked myself: Who, or what, had spoken? Was it a memory of British Lit? Divine whispering? The shade of Milton himself? The word that the voice had dropped from Milton’s line was “hungry,” and the omission made me wonder about it. People who teach Lycidas will tell you that Milton’s unfed sheep were a commentary on the failings of the clergy of his day. But hearing his words as I did, when I did, suggested to me they apply to writers, as well.

A writer feeds people. The writing life isn’t about acceptance, as nice as like souls are to be around, and while I love having my novel in print, the life of a writer isn’t about publication as a measure. It’s relationship, the one between writers and readers. Are readers finding nourishment in your work? Does your work matter? They’re hard questions to answer—there’s a limit to what you can know from online reviews and data collection. Most of what happens once a book is in readers’ hands remains unseen.

As for fame, lurid fame?

Sooner than I would like, my bones, too, will settle at the bottom of this world. In Lycidas, Milton speaks about fame through Phoebus, Roman god of poetry and music. “Fame,” Phoebus says, “is no plant that grows on mortal soil.” It’s not something any earthly power can assign. Only Jove, in the realm of the gods.

Knowing that a writer as enduring as John Milton lived the same struggles in his life and art that I have keeps me level. Writing, and putting your work into the world, is an act of faith. You choose to believe your art matters, and you live in hope—hope that, here and there, a word might be breathtaking, the way it fills its page: hope that, for someone, somewhere, as the words come together to create sense—Oh!