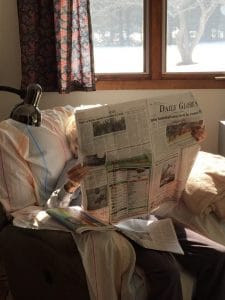 Retreat to the Woods

My father, who passed away five years ago, was also a Finn. He and Mom would tell stories about odd sounding people, secular hermits, who’d withdraw from the world and go off to live alone in the woods. Both my parents were born to immigrants—their first language was Finnish. The word they used to describe such woods-crazy people was metsähullu, literally “forest crazy.” The truth is they liked to think of themselves that way.

Our farm was in the U.P. of Michigan, where it’s still possible to get lost. Increasingly over the years, my folks would hole up at the farm, where they had few neighbors, and where all around them were miles of undeveloped land, much of it swamp. The second photo attached to this post was also taken at the farm. I love that severe landscape, but every January or February when I’d go home for a visit, I’d think that a person would have to be metsähullu to want to spend the winter there!

Retreat to the Woods-Tree Line

Lately, I’ve been feeling a bit metsähullu, myself.

Partly at the root of it is our current political situation, which feels like an unending dream that I so wish we would wake up from. But I needn’t be so grand—I have my own issues right at home. If you follow my blog, you may have noticed that the posts lately have been coming with longer intervals between them. When I started the blog, I made a contract with myself that I would post a new essay once a month, and not living up to that has weighed on me.

When I write creatively, I don’t write quickly. Generating a new text requires a hot mix of energy and emotion. In the last months, I haven’t had the emotional reserves or cognitive focus to do more than vaguely contemplate what I might write, if I could.

It hasn’t been a case of writer’s block. This summer, I’ve faced a personal truth: writing at times seems pointless to me. I wonder—why write? Why plumb the emotional depths, when life is already heavy, and I would rather run off and hide in the woods?

What has precipitated this feeling is my mother. She’s just been through a rough patch with her health, culminating in long hours for us at the ER and doctors’ offices, in hospital rooms, and in rehabilitative therapy. She has had to do the hard work of getting stronger and well. I have wrung my hands and taken every step I could to help her, my siblings wringing their hands alongside me at times but mostly from afar.

Over the last months, the parts of my life not related to my mom stopped.

My husband and I were proverbial ships rolling past in the twilight, and even when I was at home, I was only physically there. My distraction was intense. I would pass by my computer with chagrin. Not only did I not have the energy to write, I didn’t have the desire—just guilt over missing my self-imposed deadlines.

Now that my mother is back at home, a sense of normalcy has returned, along with some clarity. Truth is, being pulled away from my writing by my mother’s episode of ill health gave me a peculiar sort of respite.

Writing is not the romantic endeavor it seems, certainly not what I’d imagined back when I was a girl in love with books. I am most alive when I’m in creative flow, swinging between poles of euphoria and despair until reaching the perfect point of stasis—but aspects of the promotional side of writing are distressing to me. Not the human contact—that I love—but the hyper-focus on tracking numbers.

Data analytics—I could go on at length. Analytics is everywhere and, increasingly, everything. I’ll leave it at this: raw data—it’s like nails dropped in the driveway. My various sources of data are fuzzily vague, and they contradict one another. I’m daily reminded of the ways I’m a sad case in the data world. How many people read my blog? (Sigh.) How many libraries hold a copy of my novel? (Heavy sigh.)

It all makes me sigh. What I love about writing has been eclipsed.

The newspaper my mother is holding in the picture is important. There’s something contradictory about us Finns—and yes, American Finns still consider themselves Finns.

We share a cultural yearning to run off to the woods, but even in the woods, most of us will surround ourselves with books and newspapers and, nowadays, electronic devices to keep us engaged and feed our minds. Finland is highly literate. The simple truth is, I write because I am a person of words, descended from literate hermits.

These last distracted months of caring for my mother put some things in order for me. At the top of the list is a strong affirmation that the creative impulse in me has nothing to do with chasing my own worth through data reports. Long ago, what sustained me through the years of writing my novel was an innate drive to understand myself and to connect with similarly seeking others. It’s still what moves me.

Like so many of us, I’m navigating age-related transitions in my own life and in the lives of my family and friends—empty nests, retirement, physiological change. There’s a battle going on in me. How will I spend my remaining years? More and more, I know this: I’ll spend them in two ways—being fully present where I’m needed, and writing when I can, for my own reasons.

While I mostly write prose now, my first genre was poetry, which I see as a preserving of moments, a distilling of emotion into words. I’ll end this long overdue post by going back to where I began, back to my mother’s room and a moment of leave taking between us.

The following poem, which first appeared in The Northern Reader, is a personal lyric, true to what was happening in my life at the time. It’s also prescient, an early moment in my gradual realization that life is a process of taking leave, of learning to take leave with grace. My mother and I are the mother and daughter in the poem. I was in my thirties when I wrote the poem, still in graduate school, and Mom was younger than I am now. We were, each of us, from our different perspectives, thinking about partings.

Our feelings that morning were palpable. The emotion simmered in me all that long day in airports and bus stations. Out of those feelings grew this poem.

My mother’s always faced
a mirror with ease. Elaborate

tête-à-tête, or hasty tryst,
it was all the same—the artful press

of tissue to the lips,
the hint of perfume on my cheek

left by her parting kiss.
Today, I’m the one who’s

going. At my mirror, I hear her
down the hall, the distinct clatter

of comb and brush and toiletries.
The morning is ill-at-ease,

pre-parturient. I imagine
the lines around her lips deepening

as she purses them; her
hand, wearing my grandmother’s

skin, poised between glass
and loss. She sees

her daughter leaving her.
I see my mother leaving me.