A Notion of Pelicans: Why Pelicans?

My novel, A Notion of Pelicans, is being released this week.

I can legitimately claim to be good with taking things slowly. The photo of me at the top of this post was taken in 1994. I’m working on the first draft (with many revisions to follow) of what would become A Notion of Pelicans. My husband, Bruce, likes occasionally to practice stealth photography. He surprised me and preserved for posterity my brief curly-haired period. 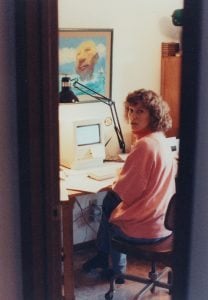 Above the desk is original artwork by Jan Gosnell, an artist friend of Bruce’s from Arkansas. In A Notion of Pelicans, the actress Claire says she wonders about the things people hang over their desks, what inspires them to choose as they do. I’m thinking she might have been looking up from the pages of the manuscript at Gosnell’s compelling, aquatic head. Bruce and I hung that painting there because we wanted our minds opened when we sat down to write. Looking at that head, having it look back, you’re not quite sure what to make of it, but every synapse in your brain is alive, working overtime.

I said in my last blog post that, in the next one, I would share how I came to write the novel. The reason . . . was pelicans. Literally.

I had decided to write a novel. I wasn’t sure yet what it would be about. I was at our home one day, just north of town, and I heard a commotion outside, a large number of birds calling. I dashed out to the front deck to find a half dozen huge, white pelicans flying in circles above the yard. I was flabbergasted.

Those birds apparently had something to say to me, and they did, talking in odd bird voices. I’m not going to say more than that about the encounter, because it would ruin your reading of the first chapter of the novel. What Lavinia Hansen experiences in that chapter with her pelicans is what I experienced with mine.

Now, I love to write scenes involving intimate partners, to imagine the sorts of things they say to each other, day-to-day. Life has given me, as it has to most of us, a wealth of experience in that department. Bruce hadn’t seen the pelicans. When I dashed back in, jumping up and down, exclaiming over what had happened, he assured me I was mistaken. We don’t, he said, have  pelicans here—he said, they must have been seagulls. Seagulls! I knew what I’d seen, and I quietly ignored him.

Being a poet, I work with symbolism. I looked up the folklore of the pelican and discovered them to be a symbol of self-sacrificing parenting, of the greatest possible love. I learned that in early Christian art the pelican is associated with Christ. Just like that, my novel was conceived. Wandering pelicans had mysteriously invited themselves into the book. Why would I say no? The synapses in my brain were blown open and working overtime.

White pelicans do spend the summer in areas around us, mating and raising young. The day after my experience with the pelicans in our yard, Bruce had to eat a little crow (more birds—couldn’t help myself) when the local newspaper ran a snippet about a migratory group of pelicans having flown through town—what it called a rare occurrence. Rare indeed. A number of people had spotted the birds. I wasn’t deluded, hadn’t imagined them.

My novel treads along the edge of what we know and can see. What a reader might take from the book, I don’t pretend to know. I do know how I came to write this particular book—a book set around a church, where very human people struggle to live together, drawn there by a legend about a white pelican. I think the way the book came to me was a gift. What sort of gift, I’ll leave to you, the reader, to decide.