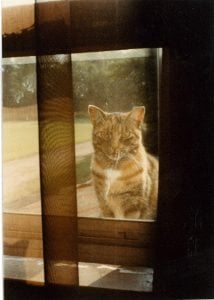 If you live in the sticks, you live with mice.

My folks’ farm was in the sticks, a mile off the highway, ringed by woods and swamp, and many an autumn day, Mom opened a dresser drawer in the upstairs bedrooms and found her table linens chewed to shreds. Once, she even found a nest—hairless rodent babies snuggling among her tablecloths. Mom had been born in the house. She was used to critters of every kind, but the nest was a bit much.

Until their later years, my folks always had a cat. The one we talk about to this day with undiminished affection was named Poopie.

My family has a liking for names that incorporate the syllable “poo.” Poopie was not the first—nor was she poopy. She had a gold-tinged tortoiseshell coat that she kept immaculate. Her hair looked sun-kissed. My mother admitted to feeling chagrined when she informed the vet’s office of Poopie’s name, the first time she took her there. But people who work with animals have probably heard stranger names. They took it in stride and printed Poopie Salli across the top of her file.

Poopie had the run of the farm. In the house, she liked to drape herself over the stairway railing. She’d hang there—pure life force contracted to a pinpoint twitch of tail. When someone would pass below, she’d wop a paw to the top of their head. Come and play. We always did. Poopie relished a game of chase, which was something to see on that narrow railing, and a round of faux-boxing turned her into muscled joy.

Poopie liked to drink from a faucet. She’d jump up and wait for one to be turned on. But she preferred her water out of a glass. If she found one, she’d dunk in a paw, lick, dunk again. Although she seemed at times a furry person, when the sun went down, she was all cat. She’d disappear. Pets on our road shared their territory with a family of coyotes. We worried, but there was no keeping Poopie in. She was a smart, brave girl—she never fell prey to whatever she encountered. Every sunup, she would climb to my brother’s upstairs window and me-o-w-w-w until he let her in.

When my folks first took over the farm from my grandmother, they mowed the fields far back from the house and barn. The shortened grass exposed a series of holes that Poopie discovered and began working like a trap line. We’d see her from the house—she’d go to a hole and wait. Eventually, a mouse would emerge, and like a lioness, Poopie would spring. Some of the mice, she’d eat—others, she toyed with. Very often, she’d run to the house with the last dead mouse, announcing herself. She’d look for the first person she could find and present her contribution to the larder.

I admire the cool self-possession of the feline. The reason? I am molten empathy. When I was the one Poopie found to receive her gift, I’d look into her eyes and be suddenly Cat, with a capital C—physical, instinctual. Then I’d look at what she was holding in her teeth and be just as suddenly and certainly Mouse. I felt the teeth, the terror, the despair of being caught, let go, caught again. If no one was around, Poopie would leave the mouse in a conspicuous place. Her favorite spot was the rug next to the kitchen sink, where someone would step on it.

One of the last summers I spent at home, my younger sister Doreen and I were in the kitchen, cleaning up after supper. We were at the sink, which had a window above it, and we noticed Poopie coming up from the barn with a mouse. We stopped to watch her.

Supper had been a cookout. The grill was near the house under the kitchen window, and beside it was a three-gallon white bucket that Mom used for trash like paper towels and tin foil. After the meal had been cooked, we’d carried everything inside. As Doreen and I stood at the sink, watching Poopie run up from the barn, we knew what she’d do. She was predictable, like nightfall. But not that day. She didn’t come to the door or look for anyone. She went straight to the white bucket, stood on tiptoe, and placed her front paws on its rim. Then, plunk, she dropped the mouse in.

We stood there, mouths open. What was this?

Poopie stood there, too, looking into the bucket. We couldn’t see inside it, but from the way her eyes were turning in her head, we could tell the mouse was alive and running circles around the bottom of the bucket. After a few moments, Poopie dropped to all fours and headed back to the fields.

Now, my sister is as sensitive as I am. At times, I wonder how we stay upright and anchored, in this hard world. What Poopie had just done floored us. We could all but hear the mouse—its distress emanated from the bucket like rings around a stone dropped into water. As Poopie trotted off to the next hole, the two of us spun in lock step from the sink, across the kitchen, and out the door.

We crossed the yard. As we neared the bucket, we could hear foil rattling. The sound was constant, like the mouse was running backwards and forwards over the foil. We had put only a few small pieces into the bucket as we cooked, so the incessant rattle was puzzling. But once we’d reached the bucket and could see inside, the mystery was solved. There was not one mouse in the bucket—there were a half dozen, weaving concentric circles as they scurried, panicked, around their white cell.

Doreen locked eyes with me, our heads and hearts roiling. What should we do? We couldn’t leave the mice in the bucket—let them die, slowly, for lack of water and food, or precipitously, when Poopie decided to harvest them. On the other hand, we couldn’t take Poopie’s little stash. Could we? No. We couldn’t deprive her of whatever instinctual satisfaction she was getting from this sudden stockpiling of living mice.

This tale ends as most probably think it will. After agonies, after much wringing of hands, the mice won. We took the bucket into the field and let the prisoners go—they scrambled away, seeming to know they were the luckiest of mice. Then, with Poopie’s disappointed aspirations on our minds, we returned the bucket to its place by the grill and went back to the kitchen. Before long, our dear huntress returned from the fields—without a mouse, this time. She went to the bucket, reared up, looked in, and began to cry. To this day, I can hear the sorrow in those little moans.

My perplexing and contradictory surges of emotion have caused me angst and even pain, but I wouldn’t have it otherwise. When a sparrow hits the window, and my heart drops to its knees—when mouse babies are being taken from their tablecloth nest, and I feel a hitch in my breath—I see those feelings as a gift. They sear into me and form the core of my work as a writer. Though I don’t have Poopie’s fearlessness, my strong store of emotional memory is the equivalent of her trap line—it’s my field pocked with holes. What I’ve felt in life takes new form in what I create, when I’m patient enough to wait beside a hole, brave enough to grab whatever comes out.