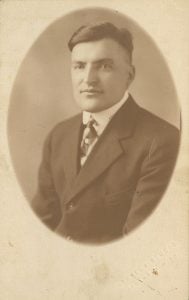 Picture postcard of my grandfather as a young man. Photo by Hirvela Studio, Ironwood, Michigan.

It’s June, again, month of weddings, of so much hope and joy. My own wedding anniversary is in June, a day my husband and I observe quietly, more and more amazed as the years add up. But June is also a bit blue for me. It’s the month my mother’s father died. I was poised at the edge of adulthood when he passed, and as those years have added up—forty-eight, this year—I have felt that family loss in changing ways, and those feelings have served as inspiration for my work.

My grandfather’s name was Väinö. We called him Paappa. To pronounce it, think of a child, falling asleep and drawing out her grandfather’s name as the day’s final word. Soft and melodious, it would sound something like “BAWP-pa.”

Paappa had emigrated from Finland in the early 1900s, and he and my grandmother, Mummu, established the family farm in the early ’20s. I share so many similarities with Paappa. I look like his family—something around the eyes, the mouth, to the map of blue veins that course prominently beneath my skin, especially on my hands.

I credit my writing to genes in that family line. My great-grandfather, Paappa’s father, had been a writer in Finland. According to family lore, he’d predicted the day of his death while it was still some months hence. As a girl, I found his prescience both haunting and liberating—and I still do. The possibilities of this world and the next have always been, for me, vast and wide.

Paappa’s passing was not my first loss of a family member. But it was the first when I was able to understand it fully. Paappa died shortly after I was confirmed at church. At my confirmation luncheon, he’d pulled me aside, touched my arm lightly, and said, “Now you are a young woman.” I have to tell you—I did not feel like a young woman. I was painfully skinny, and awkward, not comfortable in my skin, and not confident that I ever would be. But Paappa believed it—I could see it in his eyes—and when he passed suddenly, a couple weeks later, I felt the force of those words. I even came, in time, to believe them.

Paappa inhabits my work, in poems, in essays, and in my novel, A Notion of Pelicans. One instance of his presence in the novel is when the character Toni, a likeably neurotic college professor, speaks of an antique print that hung on her grandparents’ wall. The print was a night scene, with a wolf alone on a snowy hillside. That same print hung on the wall at Paappa and Mummu’s house, and I would stare at it for hours. I’ve always associated the feeling of that scene with Paappa—there was something lonely but strong about him.

Paappa’s presence is very strong in my play The Rock Farm, in which members of the play’s fictional family tell stories from their family history. Many of those stories are fictionalized versions of my own family’s history. At the suggestion of a Finnish theatre director who’d read my poems and essays about being Finnish-American, I borrowed from a number of each in writing the play. One of the stories that fictional family tells is of an aunt who died young, the way it affected the family. That thread in the play has roots in my family history—the details are changed, but the feelings are true.

A poem I wrote in my early thirties, which you’ll find below, explores that loss for my family. It’s one of the poems I adapted in writing the play. I wrote the poem when Paappa had been gone sixteen years. It’s now been 3X16 years since he passed, and my sense of my grandfather has only grown stronger. I remember sitting in church beside him at the Finnish-language service. There was such a thing, in those days. We were singing a hymn in Finnish, which I could pronounce but didn’t understand. It’s like I’m still there, in that pew next to Paappa. His voice is strong and sure, and he smiles as we sing. I’m doing well with the Finnish words, he assures me in a whisper. It warms me, and I keep singing.

An Ache in the Smoke

So many years, you’ve been gone—
you are just a shadow
in my sleep, a dreamed voice
outside the front porch door.

But your eyebrows arch
and leap above my woman’s face,
at peace in a gentler field, and sometimes
sad—as yours were,

the day your firstborn died.
You hunched forward,
on that hard kitchen chair, and cried, until
I had to turn away
and knew that I would never take for mine
a man who couldn’t weep
for what love does to us.

And there you’ve stayed,
etched into the kitchen’s yellow light—
elbows resting on your knees, fingers pressed
into a temple, an ache in the smoke
of an endless Camel.